When Mom Heard Her Son is Accident-Prone 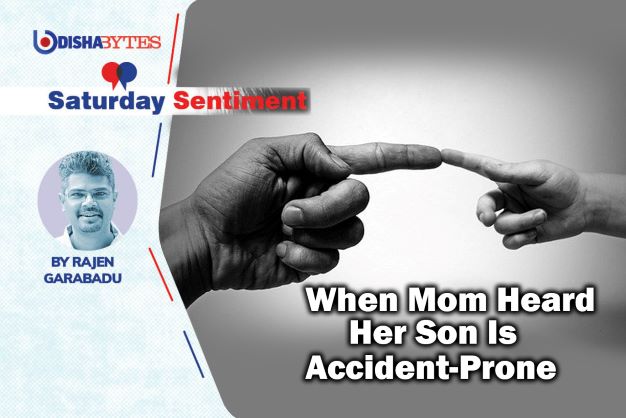 Ever dealt with astrologers? Do you believe they can foresee your future?

I never thought much about it till I had a personal experience.

Many years ago, my mother consulted astrologers to check if all was well with her family.

A couple of them mentioned that her son (that’s me) is accident-prone and is likely to encounter a big one. The scale of the outcome differed from astrologer to astrologer. But there was a broad consensus that it could get serious.

I was 19 years then. By then, I had faced a few accidents already, but nothing major.

My mom tried to find out if there was any way to avert or lessen the impact. One of them advised her that I should have a ring on my finger to keep me safe.

The metal was arranged from the interiors of central India. The ring was ordered. It was turquoise in colour. I was required to wear it on a Thursday morning after a bath and a puja. And before consuming food.

I spoilt the plan unintentionally. The Thursday after the ring arrived, in an absent-minded state, right after my bath, I headed straight to the breakfast table for my toast and poached egg.

By the time mom came looking for me, I had finished half my breakfast. She reminded me about the ring. I was sorry. It had slipped my mind.

Mom was upset. But she did not dwell much on it as she knew I was heading for my examination. I was pursuing my second year of graduation. She didn’t want me to be worried on this crucial day. She wished me luck and told me not to forget again, the following Thursday. I promised her I won’t.

I felt bad. I knew how keen she was that I wear the ring at the earliest. But inadvertently, I had delayed what could have happened the same day.

That evening, I met with a severe accident.

Sandeep, a friend studying engineering in Pune, came visiting. And we went to pick up Felu, a dear friend, before heading to our favourite haunt to enjoy some of our cherished delicacies. I was sitting behind two on a Bajaj scooter.

There was some roadwork happening ahead of Felu’s house. A labourer moved his axe to pick up the rubble lying on the road. Sandeep, riding the scooter, tried to swerve to the right to avoid coming in the line of the axe. A road divider separating both sides of the narrow road — just outside one of the most frequented temples in town — was perilously close.

Sandeep was aware of the divider and manoeuvred the scooter to avoid it. But he did not budget for my foot which was just hanging out. Those familiar with a Bajaj scooter would be aware that there is no provision for the third rider to keep his/her feet inside its perimeter.

My right foot smashed against the divider, producing a metallic sound. It sounded like the kickstart hitting the divider. A beggar sitting nearby announced that my foot was gone. I looked down and found a mass of fat where my foot once existed. All the bones of my toes were crushed.

The same beggar picked up the main bone of the big toe and handed it over to Felu. I remember feeling it drop into my shirt pocket. I blacked out. Not in the conventional sense that the term is used. I was conscious but could just see black. That’s a blackout for me.

Sandeep & Felu were both in shock. They didn’t know what to do. Someone had to decide the next step of action quickly. Luckily, I was conscious, though I couldn’t see. I asked them to rush me to Health Care, a nursing home led and owned by my cousin Dr Nirmal Garabadu.

My father was out of town but only 20 miles away. It was tough to get in touch with him. This was before cellular phones arrived in India. My cousin, Dr Nirmal, informed him it was a major accident. A surgeon had to operate it soon. And my dad needed to choose the surgeon.

My dad’s dear friends were two of the finest orthopaedic surgeons in town. But they didn’t see eye-to-eye. Picking one could make the other upset. My dad spoke to both. And left the decision to them.

Both doctors occupied the same operation theatre for the first and perhaps the only time in their professional careers. One of them performed the surgery. The other stood in solidarity. It must not have been easy for them, but they did it for my father. They appreciated that he took both in confidence and let them decide who would repair my foot.

I heard the surgeon mention to my dad that it was like a destroyed bridge. It would need to be rebuilt, brick by brick.

‘What are the chances,’ enquired my father.

‘Tough to say with certainty now,’ replied the surgeon. He went on to mention the best and worst-case scenarios, as doctors are known to do.

‘He may not be able to play football.’

‘He may not ever be able to walk straight again.’

Those were the last words I processed before the anaesthesia engulfed my consciousness. It was the most opportune time to pass out. The topic of discussion wasn’t a pretty picture to imagine.

I have not played football ever since my accident, but it has not affected my life much. It does hurt — when anyone steps on my right foot, even a child. I struggle to twist my toes on the right foot while doing push-ups. And a few other activities. But nothing that altered my life significantly.

I woke up to find my right foot plastered. The surgeon smiled when he saw me. He spoke a few lines, of which I remember only one vividly. If I had worn a covered shoe, the damage would not have been a fourth of what it was. I wore Kolhapuris. I liked the idea of my feet being able to breathe. I kept them open. But it cost me dearly.

The surgeon had asked me not to jerk my plastered foot. I obeyed his instruction every day. Except when I decided to surprise my dear friend Felu. It was his birthday, and I took a cycle-rickshaw to reach his home.

Stupid, you may think! I don’t blame you. But when you are a teenager, you do what you’ve to do.

A stretch of road between his home and mine was bumpy due to craters. I felt the jerks while crossing it. While removing the plaster, the surgeon asked me what I did, resulting in displacing my second and third toes from their usual position. They were misaligned.

Nearly three decades later, the two toes next to the big toe remain that way. Each time I see my right foot, I remember how touched Felu was to see me in front of his door on his birthday. The expression on his face said it all. It was priceless.

Can accidents be prevented? Was my accident destined to happen?

There are some things that may not be in our control. What we can do is to take precaution. We know how crucial it is to wear a helmet on a bike. But how many of us follow it religiously? While a helmet is a much-amplified accessory to wear while on a bike, shoes are hardly ever mentioned. Certainly not with the same importance.

Whether it’s a helmet or a shoe, a layer of protection can be life-saving. Or can reduce the impact significantly. But we don’t learn till it happens to us.

I was lucky. Since my cousin owned the nursing home, I received medical attention promptly. My dad had access to the best surgeons. I can smile when I reflect on what happened that day. But it could have ended very badly.

Not every time can you and I be lucky. Why take a chance? Protect yourself each time you step out. Even if that means being temporarily uncomfortable. A few minutes or hours of discomfort pales in comparison to living with a disability.