Why Sidharth Shukla’s Death Should Be A Wake Up-Call 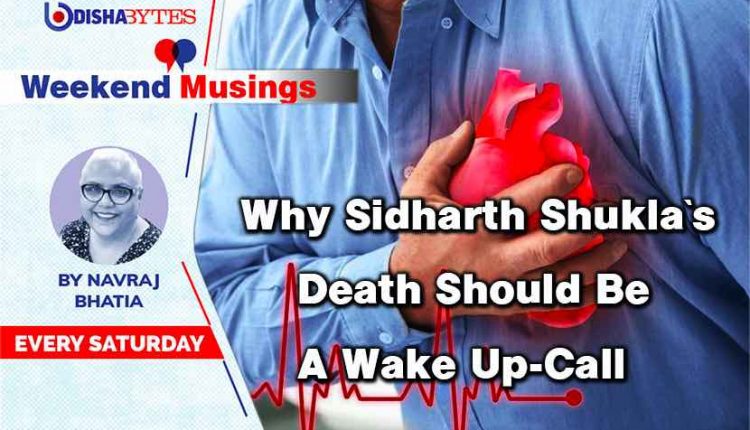 The untimely death of TV actor Sidharth Shukla at the age of 40 sent shockwaves across the country this week. It is sure to have rattled men and women in this age group making them feel insecure about their own health. There are thousands of such young deaths across the country every day but when a celebrity passes away like this, we are affected deeply. It is like someone dear to you has gone, especially in the case of TV stars because they are part of our living room every day.

There are two reactions when a celebrity has such an unfortunate death. One is that people think ‘if it can happen to him or her, it can also happen to me. Two, ‘yeh log to hote hi aise hain,’ and people are quick to attribute it to drugs and alcohol and generalise it as ‘ayiashi karta hoga.’

I think it is supremely wrong to judge a celebrity who has been providing you entertainment for years. At one level, they are like service providers because we pay to be entertained by them and like any other service provider, they work harder and harder to be of better service. In this case to entertain better. It is quid pro quo. Their existence and survival depend on us but we too, seek them.

Having said that and coming to the point of judging them for incidents such as the death of Sidharth Shukla is unfair and uncalled for because sir/madam, the fact is that if it can happen to them, it can happen to us too. Many of today’s actors are self-made achievers who have worked hard to be where they are and are as driven by their profession and quest to succeed in life as you and I. The only difference is that they have chosen the world of glamour. We tend to have a myopic view when we judge them because we limit our vision to the glitz and the façade, failing to see the humans behind it all. We troll them mercilessly and intrude upon their privacy in times of grief, denying them the privilege of mourning in dignity as a matter of right.

The fact of the matter is that every such incident should be a wake-up call for us because young people succumbing to heart attacks is a reality in our world as much as it is in tinsel town. At some level, most of them at least lead a more disciplined life than us, following a strict diet and exercise regimen because it is their job to look good and fit. But what about us?

Heart-related ailments among young Indians recently have become a concern for health experts. The issue is being debated why there has been a surge in heart attack cases in relatively younger age groups in India.  Dr Ambuj Roy, professor of cardiology of All India Institute of Medical Sciences (AIIMS) in New Delhi explained to India Today that mental stress, physical health, and other reasons were linked to rising cases of heart disorders among young Indians.

“Exercising is not the only thing. Stress is driving more and more people into alcohol and drugs. People exercise but to release stress, they end up smoking and drugs abuse. The hormone changes happening in the body due to these are directly linked to heart disorders. Mental health is equally important. We are so driven in our lives and jobs and in general. Our lifestyle is very stressful.

Many people are working long hours around the clock without realising that they have not given time to their own physical and mental health,” he said.

“It is the pressure to prove oneself in the professional life that is also leading to this high-voltage lifestyle where little time is given to personal health,” he added.

Dr Ashish Agarwal, Cardiologist, Aakash Healthcare told India.com, “Lifestyle changes are increasing the risk and incidents of chronic diseases such as hypertension and diabetes — we see patients with high cholesterol who are in their 20s or 30s. In fact, the World Economic Forum has projected that 50 per cent of people who die at a young age will die of diabetes and heart disease. Some people may also have a family history of such diseases that increases their risk further. It is wrong to perceive that having a well-built body is a mark of sound health — people must make healthy choices in terms of food by including green vegetables and lifestyle, avoid alcohol and quit smoking altogether, and sleep for at least 7-8 hours. Those who have a family history of hypertension or heart issues must start monitoring their health through annual screening from the mid-30s.”

According to studies, the proportion of people below 40 having a heart attack has been increasing, rising by 2 per cent each year for the last 10 years. “It used to be incredibly rare to see anyone under age 40 come in with a heart attack and some of these people are now in their 20s and early 30s,” said Ron Blankstein, Associate Professor at Harvard University.

Keep Boredom Away For Children With Online Hobby Classes