Why Widow Remarriage Is Still An Anathema? 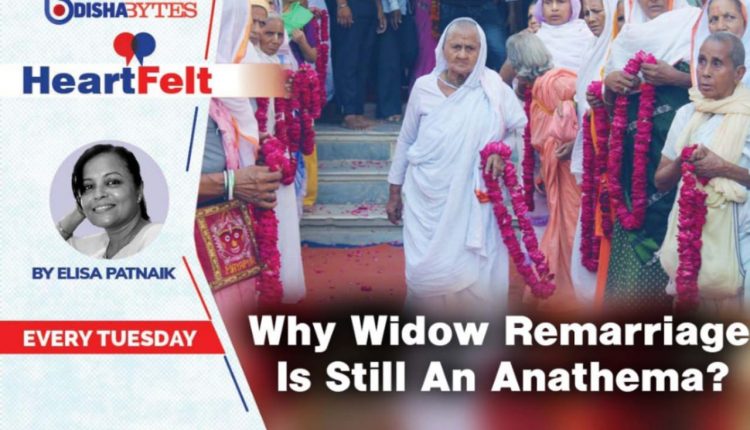 All the young and middle-aged married men I know whose wives died untimely, have remarried. On the other hand, all women in the same age group who had lost their husbands, are still single.

While we may have somewhat moved away from the despicable customs and practices reserved only for women upon the deaths of their husbands, Indian families and society are yet to easily accept their remarriage.

A young relative of mine in her early thirties with a young child lost her husband tragically to a chronic ailment. It’s been more than five years since her husband’s demise and while family members from both sides have been supporting her financially, her life is far from desirable. My heart wrenches when I see her with a severely constricted social life and bereft of friends in her age group. She hardly steps out of the house and at family functions, she always keeps herself secluded in a corner. Not once have her parents or in-laws broached the topic of her remarriage, perhaps assuming that the course of her life has now been cast in stone.

The death of a spouse is not just emotionally painful and traumatic but also brings about multiple trials and tribulations for the surviving partner. Suddenly, there is a vacuum in marital life and practical problems galore that need attention from the grieving spouse. But for the surviving wife, it is much tougher as she has to wage additional battles, conform to prescribed cultural and social norms befitting a widow whose life abruptly takes a U-turn.

Notwithstanding the presence or absence of children – her life and lifestyle are overnight altered by family members and people around. Dull colours and clothes, children and household responsibilities, social and cultural sanctions and loneliness rule her life post her husband’s demise. Even a few years down the line, there is hardly any conversation or decision to find another partner for her, no matter what her age.

In contrast, widowers are unreservedly encouraged to tie the knot for the second time – to find a new mother for the grieving and uncared for children, to take care of him and other family members and to manage the house. This is quite commonly accepted and well adapted by families and society.

While the stereotypical image of a widower is that of a helpless, harried yet stoic man in urgent need of a partner, the impression of a widow is that of a cheerless, sacrificial, lady struck by great misfortune who has to bear the children’s responsibility, without a partner, of course. Families cheer and heave a sigh of relief when the son is lucky to be blessed with a good partner for the second time. They sneer when talk of finding a suitable partner for the daughter or daughter-in-law arises. The sanctity and eligibility of a widower as a second-time husband is never questioned whereas widows are always considered ‘inauspicious and second-hand.’ They are constantly reminded of their misfortune and loss for the rest of their lives.

Families and society hardly consider the needs, opinions, and desires of a woman whose husband has passed away. Rather, such a woman leading a normal, enjoyable life is often frowned upon. I have seen the looks of disapproval given by my supposedly progressive friends and relatives when they come across widows decked up, attending functions and parties, wearing bright coloured attires, enjoying their life, or going on a holiday. In many traditional families, widows are further protected, their freedom and independence curtailed and they are even prevented from going out of the house unescorted.

Widowed mothers are put on a high pedestal. It’s as if their sole responsibility and purpose in life is to bring up their children singlehandedly. We have seen and heard of umpteen instances of women sacrificing everything to give the best to their children, a la Nirupa Roy portrayal in countless Bollywood films.

The very idea of remarriage for a middle-class widow, even without a child, is still considered sacrilege in India. There are rare exceptions, when the woman concerned chooses a partner for the second time on her own or when another man shows interest to get married to her. Very rarely do family members go groom hunting for their widowed daughter or daughter-in-law with her consent. And I salute such people!

Indian Census data shows that widowhood, separation, and divorce are more prevalent among women than men indicating that women have fewer chances of remarrying than men. In addition, India has a large population of more than 42 million widows and most of them survive in deplorable conditions. Widows are disproportionately represented among senior citizens, as male widowers have a higher tendency for remarriage.

As it is, Indian women have very little say when it comes to making decisions about their marriage – from consent or familiarity with their future partners to dowry and other customs. Men not only enjoy greater freedom in choosing their life partners for the first time but also when they remarry.

We have completely normalised women leading lonesome and dull lives at the altar of their families and being judged for their actions even though they are in no way responsible for the death of their husbands. Why is there so much social stigma across communities associated with widow remarriage in India?

The prevalent patriarchal norms and the political economy is largely responsible for low remarriage among women, especially among traditional, feudal, and rural families. In fact, the fear of losing family honour and property if a widow remarries still holds true among the property-owning feudal classes. So much so, that they prefer the woman marrying any of the surviving unmarried brothers of the dead husband.

Social prohibition often prevents remarriages of women while the same is not applicable to men. A middle-aged widower often marries a younger girl or gets married to the unmarried sister/cousin of the dead wife. In contrast, much younger wives are never permitted or encouraged to remarry and are rather compelled to lead a life of abstinence and drudgery. Widows in India are not only vulnerable but are discriminated against due to negative social attitudes and social restrictions placed upon them.

The sacrosanct image of a widow who leads a life of austerity and abstinence is so much ingrained in our minds that the idea of women wanting to lead a new life, remarry is nothing short of an anathema to the family. Even in the rare case that remarriage is considered, it is always with another widower or divorcee no matter how qualified, competent, and eligible the woman is.

For the affected women, it is a tough situation to come out of the shackles of tradition and social norms. While many are not empowered enough to take the decision, others simply do not have a choice. The social and cultural conditioning is so deeply embedded that even strong and independent women at the crossroads find it difficult to go against their families wishes and take a radical decision themselves.

Times are surely changing, albeit slowly. In a few heartening instances, sons and daughters are placing matrimonial advertisements for their mothers; parents-in-law have made it their life’s mission to resettle their daughter-in-law in happy matrimony and sensitive and truly emancipated men are coming forward to marry women whose husbands have departed.

Sadly, such instances are few and far between. We need to encourage this more in our families and communities, set examples and make it a woman’s choice and nobody else’s.

Cricketer Sunil Gavaskar To Be Conferred With SJFI Medal