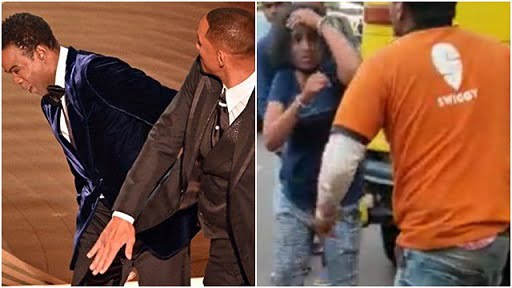 At a time when the deafening noise of the Russian bombing of Ukrainian cities has been relegated to ambient music status, two small incidents created some noise in the media. One was a slap by a celebrity actor at the Oscars and the same act by a faceless Swiggy food delivery boy at a crowded footpath in Bhubaneswar.

It’s interesting to analyse the two incidents for their similarities in the action and justifications of it and the dissimilarities at the level of echo it created. Both the perpetrators had their personal reasons but there was a vast difference in the way the organisations they are members of responded to it.

Will Smith, the celebrated actor who was the nominee for the Best Actor award, was in the front row of the 94th Oscar ceremony and the world audience couldn’t believe it when he walked up to the presenter Chris Rock and gave a dramatic slap across his face. That was at the other part of the world. Closer home, various social media channels were filled with the video of a Swiggy food delivery boy delivering perfectly timed slaps to a girl who refused to be subdued. In both situations, no one could immediately know what the provocations were.

The similarities of action ended here.

Will Smith got upset by a joke by Chris Rock where he pulled the legs of Jada Pinkett Smith, his wife. Smith as the husband felt it was his job to teach her tormentor a lesson. Our Swiggy boy had a different reason, he was taking videos of a couple who were having some altercations and the girl objected to it. He had his reason to justify his action and when he couldn’t reason it further, he chose to let his slaps do the talking. He is conditioned to complete his task in time to get a good customer rating along with his fees. The most interesting part was his justification on camera for doing what he did — play moral police and restore discipline in the society by punishing the deviant woman”.

The audience of both the cases reacted as expected. Some supported and some suggested that both could have avoided the unpleasantness by holding back their anger. Many of Will’s friends said that this matter will get sorted among themselves like family. Chris Rock refused to press charges. Will in his acceptance speech accepted his folly and asked for forgiveness and in an Instagram post sought forgiveness from Chris.

Though the matter looked to have been sorted out between the two and would have naturally died down like many other late-night party incidents, the Academy of Motion Picture Association in a statement said that the matter will be taken up at their board meeting to be held on April 18 and appropriate decisions will be taken. As I write this article, the news of Will resigning from the Academy membership rolled in. We know how Will must have been given the Hobson’s choice of honourable resignation or suspension or termination for his unacceptable conduct. He must have chosen the former.

The echo of the two slaps at the institutional level is the most interesting part. We don’t know what stand Swiggy has taken as one of its contract workers was involved in an act which is not just misconduct but surely criminal. Also, what has been done by the police is still not known.

Public memory being short, we will soon forget this incident as a regular one that we see on the roadside these days. But institutions involved in this also forgetting this or letting it pass is a serious systemic flaw. How callous are our institutions towards their own rules and reputation that they chose not to react to this publicly? Does that demonstrate how accepting we are of conduct that in the rule book is mentioned as unacceptable? We don’t stand with the values which we mention in the letter and fail to accept in spirit.

In the background of these two incidents, it’s necessary to analyse how we as members of various organisations and as citizens of society define what is considered unacceptable behaviour and how far we go to enforce it neutrally without any bias. Are we uniformly unforgiving to any member big or small, important or non-important, famous or not so famous when it comes to their conduct?

We all are aware of the “Tu Janta Nahin Main Kaun Hun” culture of the North and how law enforcer treats them differently in fear. We have an adage that says “Panditanka Pua Mankada Marile Dosa Nuhen” which points to the societal acceptance of considering the importance of the person involved in such acts before any attempt to penalise him is initiated. The higher the echelon he belongs to, the softer has to be the penalty for him. That’s an unwritten but accepted code. Our fear and respect for people with privilege and importance don’t allow us to bring them down to the ground and crush their career or public reputation. Society thinks that as he is from a good family this misconduct was an isolated aberration, and he should be allowed to realise and make corrections.

That perhaps bares the contrast between our society and the Western ones when it comes to fairness and integrity.

National Maritime Day: The Intrepid Seafarers Of Odisha & Their Evolution Through Ages [In Pics]