With Blood Moon In Sky, Early Boita Bandana Rituals On Kartika Purnima In Odisha This Year 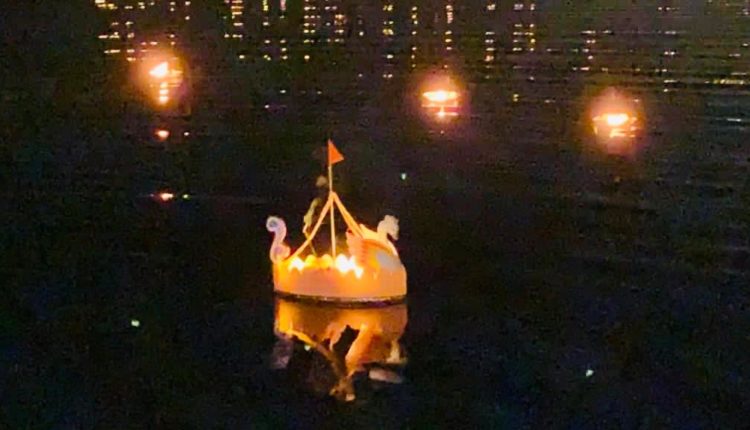 Bhubaneswar: With a total Lunar Eclipse falling on Kartika Purnima, the full moon day of the Hindu holy month of Kartika, this year, people of Odisha are likely to throng water bodies from late Monday night ( 2 am) for the Boita Bandana rituals, which have to completed by 5.54 am.

On this day, people across the state congregate near water bodies and float replicas of boats made of banana stems, paper and thermocol. They light lamps in memory of the ancient traders called ‘Sadhavas’, who started their voyage on Kartik Purnima day with ‘Sadhavanis’ ( their wives ) bidding them farewell by worshipping them and the ships. Betel leaves, areca nuts and rice are placed in these small boats.

Five platoons police force will be deployed in Bhubaneswar for the smooth conduct of the festival. Systematic traffic management, parking arrangements and security measures have been put in place. People have been warned against entering the water while floating boats.

“All rituals of Kartika Purnima, including Boitana Bandana, and special ‘Bhog’ in temples are likely to be observed on Monday itself,” said priest Shakti Prasad Mohapatra.

The Purnima tithi begins at 4.15 pm on November 7 and ends at 4.31 pm the following day, a report in TOI said.

Keeping in view the last eclipse of the season, the Jagannath Temple administration in Puri has also revised the schedule for the rituals of deities in the 12th-century shrine and those will be completed before 5.54 am, when ‘Paka Tyaga’ will start. People have been advised to abstain from taking food and performing puja after this time.

The phenomenon will occur at 5.05 pm after sunset and the penumbral eclipse will begin to dim at 5.10 and end at 7.25 pm across Odisha, Deputy Director of Pathani Samanta Planetarium Subhendu Pattnaik told Odisha Bytes.

Also Read: Total Lunar Eclipse On Nov 8: All You Need To Know About Visibility, Timing In Bhubaneswar & Other Cities

Come Back, It Was An Error! Twitter To Some Employees Who Were Fired