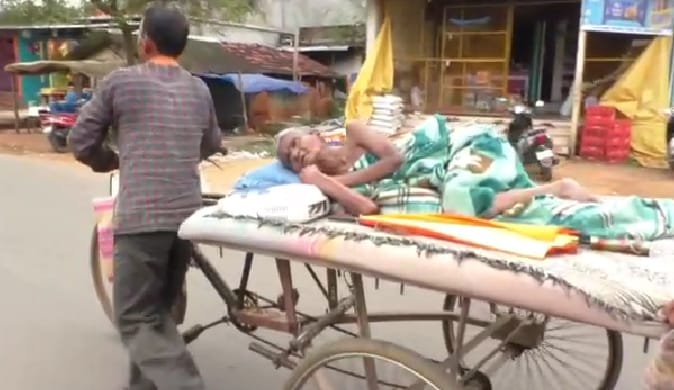 Malkangiri: An old woman suffering from age-related ailments was carried on a trolley rickshaw by her sons for treatment in Odisha’s Malkangiri district on Sunday.

The incident was a grim reminder of the Dana Majhi case reflecting government apathy. However, this time it was not the medical authorities but alleged high handedness of power supply authorities which led to the plight of the family.

Deepak Dey of MV-41 village, who was pulling the trolley rickshaw with his unwell mother on it, alleged apathy by the Tata Power electricity officials who snapped power supply to their house more than a week back. Dey alleged that when he approached the officials for restoration of power, they threatened him with dire consequences and asked to return.

According to reports, Dey has taken two power connections, one for his lift irrigation work and another a domestic line. Last month, electricity bill for his home was Rs 683 for which he paid Rs 700. Dey alleged that the electricity department has given him another Rs 21,000 bill against the LI line which is false. However, he claims to have paid Rs 7,000 against the LI connection and also possess the bills for the same. “Though it was a false bill (someone else’s bill), I paid partial amount as my mother’s health was deteriorating in the absence of power supply,” said Dey.

However, Tata Power cut off power to his home and farm without verifying the papers, alleged Dey.

Explaining his case Dey said his 100-year-old mother was unwell for the last few months due to age related issued and they had spent around Rs 3 lakh on her treatment. At home she was on oxygen support at intervals and air conditioner was mandatory, for which they had taken a three phase connection and installed AC. “But, a week back the authorities of Tata Power South Odisha Distribution Limited (TPSODL) came to our house and disconnected power supply claiming that we did not pay the bills,” said Deepak.

Deepak, a small farmer, said when they approached the local executive engineer of TPSODL with all the bills, they were asked to return. As his mother’s health deteriorated, Deepak decided to carry his bed-ridden mother to collector office on Sunday to draw the attention of the administrative head and hoping for a solution.

After carrying her for nearly 20 km on NH-326, Deepak was interrupted by police as well as Tata Power staff who forcefully shifted the woman to hospital after convincing them to restore power connection at the earliest.

Executive Engineer of TPSODL, Malkangiri, Pratap Keshari Nayak said “the power disrupted for the dues pending against the LI point. However, after learning about his mother’s case, we had sent a team to restore power connection to one phase. However, Deepak did not allow the employees to enter his property and wanted normal restoration of power. As the transformer is located on his land, the employees failed to restore the power connection.”