A Movement For Sambalpuri Theatre, Literature And Culture 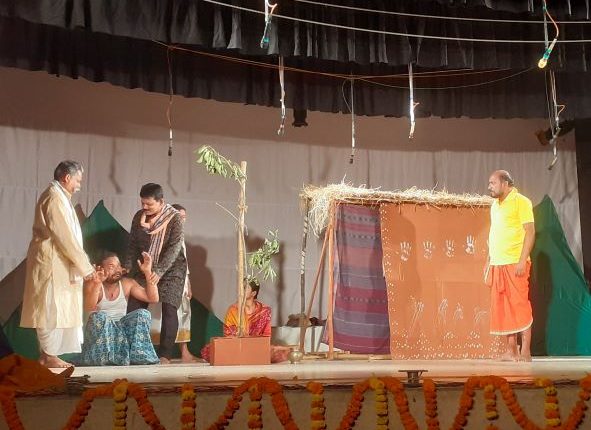 Decades back, whenever enthusiastic theatre lovers put up a play in any district of Odisha’s western parts, it usually used to be in Odia though Sambalpuri was the language spoken in those areas. There were very few scripts written in Sambalpuri language and Sambalpuri plays were rarely staged.

Theatre activists like Murari Prasad Mishra and Atal Bihari Panda set the tone for Sambalpuri plays by coming up with their scripts in the language. Between mid-seventies and mid-eighties, talented playwrights like Mangalu Charan Biswal and Binod Pasayat made conscious efforts to create a regular space for plays in Sambalpuri.

In 1997, two of Sambalpur’s leading social and cultural organisations – Yuba Udayan and Swara – thought about organising a drama competition, which would be a platform only for plays in Sambalpuri language. It proved to be a momentous moment for the Sambalpuri drama, language, literature and culture.

The competition was named after Sambalpur’s iconic hero Veer Surendra Sai, remembered for his relentless resistance against the British for nearly three decades. The Veer Surendra Sai All Odisha Sambalpuri Drama Competition, held in the last week of December every year at Aranyak Mandap in Sambalpur’s old locality of Jharuapara, was a roaring success from the very beginning with teams from different districts of western parts of Odisha participating in it.

In the last 25 years, over 500 Sambalpuri plays have been staged in Aranyak Mandap. The competition has helped create as many original scripts which have enriched Sambalpuri literature.

The plays at Veer Surendra Sai All Odisha Sambalpuri Drama Competition have effectively shown a mirror to society. They have covered vital issues that affect all of us – from decadent family values, rotten education and healthcare to urbanisation, economic stress, rural distress, migration, displacement, mining, caste and communal polarisation and corporate control of national wealth. In December 2022, as many as four plays depicted the loneliness and desperation of the elderly people.

Many of today’s eminent playwrights, directors and actors recount how they began their journey in theatre and also cinema from Aranyak Mandap. They admit that they polished their craft by coming back to the Veer Surendra Sai All Odisha Drama Competition year after year.

Artistes say they got the kick to perform better before theatre lovers in the 400-seat capacity Aranyak Mandap. Every year, theatre lovers, almost a half of them women, throng the auditorium to see their favourite plays by paying for the tickets.

It is a kind of enthusiasm rarely seen elsewhere in Odisha. Odia cinema legend Sarat Pujari was always full of praise for the disciplined crowd at Aranyak Mandap that never failed to encourage the artistes during the competition.

It’s not a joke to organise a competition of such a scale taking care of food and stay of hundreds of artistes coming to perform and organising their tools and equipment for the stage with hardly any institutional support. However, volunteers at Yuba Udayan and the theatre lovers of Sambalpur who support the endeavour by paying for the tickets have shown their resilience in making it happen.

After silver jubilee celebration, the Surendra Sai All Odisha Sambalpuri Drama Competition can safely set its sight on completing its diamond jubilee.

A Case For Professional Politicians