Black Or White? Still A Grey Issue For Women 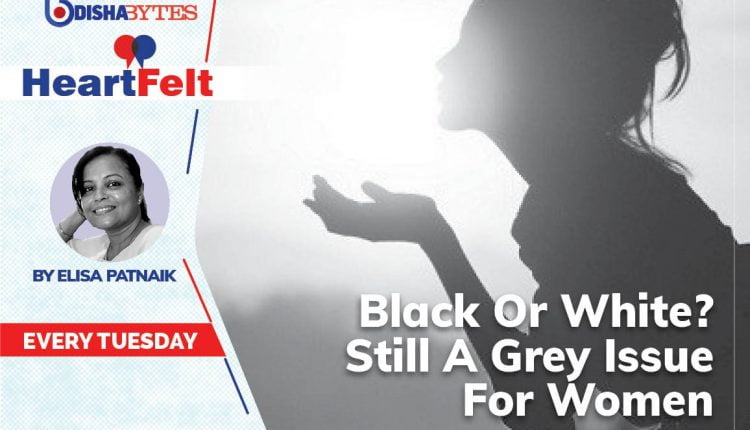 It is astonishing how a little colour makes all the difference. Transforming you into a grandmother from a mother. Or to an elder sister from a mother. Well, to clear the bewilderment, this is how my experience went. It was late last year, when the COVID cases were coming down and we had begun venturing out a bit. My nine-year-old daughter and I were attending a birthday party in our apartment. Soon the birthday girl’s grandparents began chatting with my daughter and pointing towards me said, “Your grandmother looks very smart and young.” My daughter looked at me surprised and replied, “She is my mother and not grandmother!”

A few days after the incident, I received the same comment from a shop owner. My daughter looked at me and insisted it was time to colour the greys and become her mother once again.

My hair started greying in my early 30s but I started using hair colour much later and have not been fastidious about it, leaving the grey roots as it is for months. With subsequent lockdowns and restricted socialising following COVID, I let the streaks of grey grow with abandon. And loved it too. Honestly, I would have happily continued with it, if not for my daughter and well, my mother and mother-in-law who insisted that it’s fine not to cover the greys when I actually turn into a grandmother but not before that!

Later on, my husband and children gifted me a day at a salon on my birthday, and the package included a haircut and hair colouring. And when I shared our birthday celebration photos with friends and families, they commented that I look just like my 18-year-old son’s sister. So, this is how my identity changed within weeks. From that of a grandmother to an elder sister to my kids. In a matter of days, after I coloured my greys to brownish black.

I admit, it was no less dramatic and superfluous than the Indian commercial for hair dye in the 1990s where a teenage boy refers to a young woman with grey hair as aunty, until she dyes her hair – following which he switches over to an acceptable didi.

Such dramatic transformation is not so much for the men, mind you. Does the grey haired look better on men? Then, why are they complimented for that salt and pepper look, admired for that distinguished silvery streaks which ascertains their solid presence? Well, sexism seems to reign over ageism here. Where grey-haired men are complemented and admired while women with streaks of sliver are forced to confirm to the stereotypical look enabled by socio-cultural norms and narratives.

Our popular culture fuelled by the advertising and media industry leaves no stone unturned to convince women that embracing your grey means losing your youthfulness, beauty and charm and something to be embarrassed about. Women still get perturbed about comments on their appearance and grooming. Be it their grey hair, chipped nail polish or unwaxed limbs.

Most of the advertisements for hair colour are sexist and confirm to the popular narrative persuading women to cover their greys. While one commercial shows a lady unable to come out of her shock upon discovering a streak of white, another is referred as the ‘orange aunty’ by a kid because of her mehndi hued hair.

Eliminating the visible signs of ageing is an inherent part and parcel of the societal pressure that women are to look a particular way. They have always had to try harder trying to meet prescribed standards when it comes to their appearance and behaviour. And when sexism and ageism work combinedly, it tougher for women. It’s as if the image of the multi-tasking and well-groomed wonder woman who juggles everything effortlessly cannot just fault by not colouring her grey hair.

The physical effect of women’s aging have always mattered more than men’s. Women are not spared the taunts and the assessment and are often subjected to unkind comments in sharp contrast to men.  We are often bombarded with images of grey-haired women who are either grannies, or school headmistress who lead boring, domestic and austere lives with little interest, aspiration or excitement in their lives. Which, ironically, changes spectacularly once they start dying their hair.

Lately, however, there has been a positive shift in perceptions and representations, albeit modest, towards body and appearance positivity among women with more and more women of varying ages and stages of greying accepting their greys and flaunting it as a natural asset. This radical and open celebration of grey hair has led hair colour companies to even come forward with more products in this category. And suddenly, silver streaks, frosted tints have become glamorous.

But honestly, grey-haired women who choose not to colour have not had it easy either. They have to constantly respond to questions from friends and family members on their choice not to colour. A few others go the extent of labelling it as an intentional attempt at cultivating an ‘intellectual’, ‘Leftist’ or ‘feminist’ or ‘political’ look.

Many women have also struggled with the decision whether to colour their grey hair or not for various reasons. Some succumb to family and societal pressure and continue with the practice even if not too happy about it. Others dislike the tedium and drudgery  of recurring salon visits or attempts at home and the regular use of chemicals. And yet continue to colour unable to convince their dear ones or to dismiss the white roots peeping every week.  And for a few, the transition from black and white to white is messy.

However, like many other epiphanies encountered during the COVID Pandemic, many women have begun to realise that possessing grey hair is not a big deal after all and embracing ones’ grey could be liberating, empowering and true to one self.

More and more Indian women – both young and matured – are beginning to welcome their grey streaks or are going dye-free, unapologetic about their looks and are less eager to please others. They have begun to believe that one can still be spirited, relevant, active and gorgeous while still having crown full of grey. Some of them are even eager to try out more styles, cuts and hair care for their grey hair.

What we need is more and more female grey and white-haired icons celebrating their uniqueness and naturalness while feeling proud about their look. There aren’t many grey-haired women celebrities or personalities – both young and middle-aged – for other women to get inspired. With more and more grey haired women in the public eye and portrayed positively in the media, the familial, cultural and social pressure to look a certain way is sure to come down.

So, is there a clear answer for women on the question whether to dye or not dye? Well, frankly, for me it’s a matter of individual choice best left to the women themselves. But a choice which is well-informed, not weighed down or shaped by typical notions of beauty and gender. And if they wish to colour their greys, why just restrict it to black? Red, purple or burgundy – the colour palette is their choice to pick from. Black, grey, silver or red –  own and celebrate your hair. Be happy, be you.