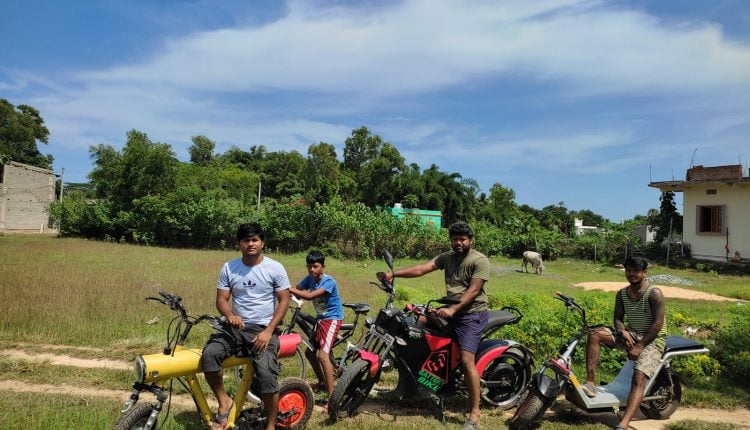 Balasore: After being successful in their experiments to make new electric bikes during the lockdown, three brothers from Odisha’s Balasore district have now converted old petrol-run motorcycles into electric bikes.

They have already converted three motorcycles into battery-run bikes in three months and the demand is now increasing day by day.

Three brothers Shankar, Shivjee and Shambhu Choudhry of Sundari village in Balasore district are in it together.

“After completing ITI, the three of us started our own business. During the lockdown in 2020, we got time and made three models of electric bikes. We invested Rs 40,000 for a small model and then Rs 60,000 and Rs 90,000 each for two other models,” said Shivjee.

Upon seeing their work, some people suggested that they start converting old bikes into electric ones.

“The engines of some motorcycles were damaged. The owners asked us to convert them into electric bikes. We experimented a lot and were finally able to covert. In the last six months, we have converted three bikes into electric bikes. The customers are very happy with our work and the demand is increasing,” he added.

After charging once, the bikes can run for 130 km.

“We change the damaged engines of old bikes and insert a motor battery. People don’t need to fill petrol in these bikes. The battery has a three-year warranty. The price of conversion depends on the demand,” said Shivjee.

The siblings have also made battery-run cycles and converted normal cycles into battery-run ones.

“We were always interested in making new battery-run bikes but didn’t have that much time. We got it during the lockdown. The concept of E-vehicles has a good future,” he added.

“If the government gives permission and cooperates, we will start a factory for making battery-run motorcycles. We are making them manually at present. This way, we will generate employment too,” said Shivjee.