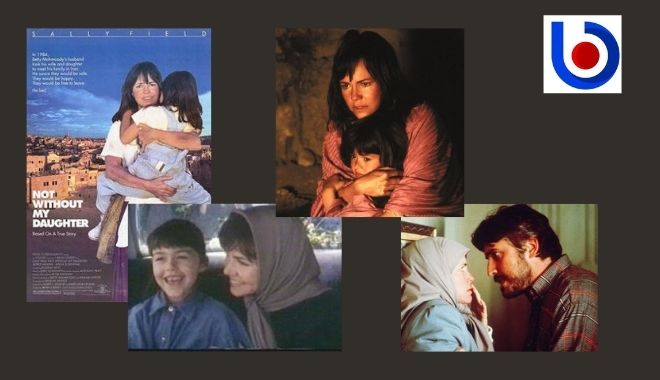 Actress Gilda Susan Radner calls motherhood “an act of infinite optimism”. On this International Mother’s Day, Radner’s saying conjures up in my mind the figure of an ‘exceptionally brave’ mother called Betty. I will explain later why I call her bravery unconventional. Betty appears in the biographical account of her escape from Iran to America in ‘Not Without My Daughter’ (1987). It was later adapted into a film by the same title in 1991.

Betty’s character is based on the life of a real American woman Betty Mahmoody who had married an Iranian man Sayyed Moody Bozorg Mahmoody, popularly referred to as Moody. Betty had her own doubts about her husband’s suggestion of a vacation in Iran. She knew though her husband was an affluent doctor in America, his heart was in Iran. He used to feel connected tuning in to Iranian radio channels and talking to his folks over phone, more than anything else. His sister Ameh Bozorg meant the world to him. So, when Moody suggested the idea of a vacation to Betty, she became reluctant. She says: “But I was obsessed with a notion that my friends assured me was irrational – that once Moody brought Mahtob (her daughter) and me to Iran, he would try to keep us there forever.”

Reaching Iran changed Moody completely. He became abusive towards his wife Betty and child Mahtob. Though at some point, he wanted the three of them to stay together, that was not in the manner of affection but coercion. He wanted them to settle in Iran, much against the wishes of his wife Betty who was aghast at the primitive traditions and customs of Iran. Moody became increasingly abusive when he learnt about his wife’s wish to return back to America. The war between Iraq and America in the 1980s changed Moody’s notion towards his past life in America that he once adored. In addition, the conservative setting of an Iranian lifestyle and the patriarchal hold made him a devil. Betty says: “His mind was a blend of brilliance and dark confusion. Culturally he was a mixture of East and West even he did not know which was the dominant influence in his life.”

Betty showed courage in protecting Mahtob from her father’s irrational rage (that often flew high), even at the cost of hurting herself on numerous occasions, and being given a life threat by Moody. She says: “Once more all thoughts of my own safety vanished from my head. Desperate to save Mahtob from whatever unknown horror awaited her, I flung myself at Moody and clutched fiercely at his arm, my nails opening a tear in his suitcoat.” Moody once even bit Betty, when she was trying to save Mahtob from his wrath. Even then, her only concern was the safety of her daughter: “Mahtob’s shrieks grew louder and more despairing as Moody dragged her from the classroom, down the hall, and out into the street. I was dizzy with pain and fear, terrified of what Moody might do to me. Would he really kill me? If I survived, what would he do to Mahtob? Would I ever see her again?”

What makes Betty’s courage exemplary is that she does not run away to America on many occasions that she could have, when Moody leaves her alone without Mahtob. Moody dashes Betty’s head on the floor and bangs it many times in one of the fights they have. He keeps her locked all the time and monitors her movements like a spy. Despite all these atrocities, she resolves to leave Iran only with her daughter. Though she tries to contact various people from the Embassy and others who could help them escape, she avoids the police: “They [police] had the power to deport me, forcing me to leave the country without my daughter. Mahtob would be trapped forever in this crazy country with her insane father.”

The bond between Mahtob and Betty is celebratory especially on a day like International Mother’s Day. Betty understands Mahtob’s slightest discomfort, be it her situation when she is not able to use the filthy washroom at the Iran airport or when she shivers in fright at the sight of the giant cockroaches in the bathroom of Ameh Bozorg. She understands her fears, insecurities and happiness. And the feeling is mutual. Mahtob reciprocates by supporting her mother at every step. She gives her mother a hint about her whereabouts by pretending to return her doll and saying she doesn’t need it as she is with other kids and it will get dirty. Though put to a lot of cross-questioning, Mahtob does not even once reveal that Betty had been to the customs office. Betty forgot his own religion and adopted the Islamic faith in her quest of being united with Mahtob. And Mahtob, upon being separated from her mother, suffered quietly in her hope of re-uniting with her mother. In her desperation, she also tried to escape: “…I wanted to run away and come back and find you.” And, finally, the mother-daughter duo accomplishes their mission and returns to America, leaving Moody behind.