Cyclone Fani Likely To Cross Odisha Coast On May 3: IMD 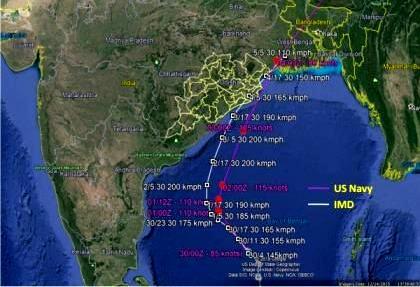 Bhubaneswar: The very severe cyclonic storm ‘Fani’ is very likely to recurve north-northeast and cross Odisha coast between Gopalpur and Chandbali, to the south of Puri, around afternoon on May 3, the India Meteorological Department’s (IMD’s) afternoon bulletin said on Tuesday.

It is very likely to intensify further into an extremely severe cyclonic storm in the next 12 hours and move northwest till May 1 evening and thereafter recurve north-northeast and cross Odisha coast between Gopalpur and Chandbali, to the south of Puri, around afternoon on May 3 with maximum sustained wind speed of 175-185kmph gusting up to 205kmph.

Fishermen are advised not to venture into deep sea areas in the northwest and the adjoining west-central Bay of Bengal along and off Odisha and Bengal coasts from May 2 to 4. Those who are out in deep sea areas are advised to return to the coasts by evening on May 1, the bulletin said.

Since the surge of the cyclonic storm is most likely go up to a height of about 1.5m, the high tide is very likely to inundate low-lying areas in Ganjam, Khurda, Puri and Jagatsinghpur districts at the time of landfall. Keeping this in view, IMD has advised the state government to suspend fishing operations and carry our extensive evacuation of people from the low-lying areas. Apart from this, it has advised diversion or suspension of rail and road traffic and asked people in vulnerable areas to remain indoors.