Devadasis Of Lord Jagannath: A Lost Tradition Of Divine Romance 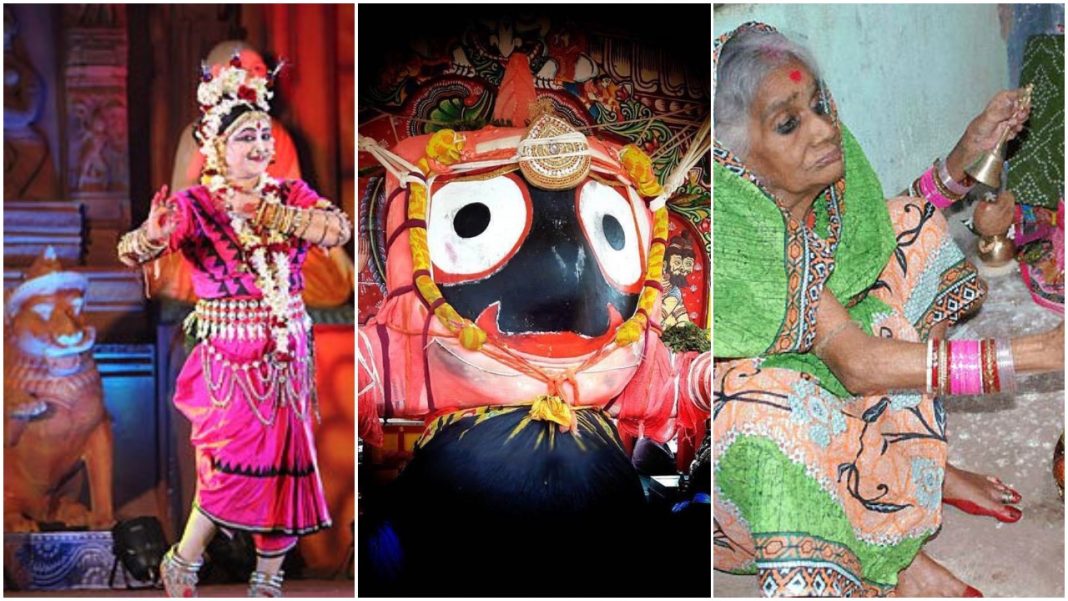 Among the 36 different services (seva) offered to the Lord, the rituals performed by Devadasis, also known as Maharis, was the only category where women were allowed to serve Lord Jagannath. Many historians assert that this is the only Vishnu Temple in the country where women could perform specific rituals other than dancing and singing.

At slumber time, the Khuntia servitor recites Manima Daka Slokas and scatters flower petals on the beds of the deities. After doing so, he tosses petals up into the air to welcome all the divine beings who have come that evening to observe this ritual. The Lord is Surya Narayan while enjoying the divine slumber. The Sloka that the servitor recites is:

You are King of kings!

You are Master of many universes!

You are the controller of all creation!”)

Before his sleep, music and dance was presented to the Lord which symbolised the cultural significance of the Jagannath ‘belief’ and the Lord’s accent on music and various forms of art to ‘cleanse’ mortals and souls. Ratna Singhasana is “Aum”, the original sound of creation. The music, dance and art forms outside are the different vibrations for humans to move back into those vibrations and dissolve themselves to be one with the Universe. And that is the oneness or the Advaita philosophy that represents Vedanta.

Odishan art forms and their diversity centre around Lord Jagannath’s philosophy, beliefs and practices. Music and dance with musical instruments, became an integral part of the Lord’s services.  In Jagannath Temple, many scenes of musical instruments such as veena, flute, mardala, dambaru, kahali and mrudanga indicate that these musical instruments were in popular use in the temple. The rulers of Ganga dynasty encouraged “Geeta Govinda” to be included as a part of the ceremonies of Lord Jagannath. As per the Madala Panji Kabi Narasingha Dev (1282-1307 AD), the successor of Langula Narasingha Dev, the patron of the Konark Temple, introduced singing of “Geeta Govinda” dance in the temple[1]. Poet Jayadev of 12th Century was a dedicated devotee of Jagannath.

The Devadasis were also called Maharis after the Mahari dance form. Devadasi literally means ‘female servants of God’. The Madala Panji states that gods and other celestial beings (including the gandharvas and apsaras, singers and dancers of heaven) attended the installation ceremony, pratistha, of the deities at the temple. Many believe that Rambha and Menaka can be considered the first Devadasis to have danced for Lord Jagannath. The tradition of conducting seva or services of music and dance as part of the ritual worship of Jagannath is ancient. Nachuni or dancing girls have been part of the team of sevayats performing these services from the very beginning, and so are the mardalika or percussion players and kanatalika or cymbal players. The Devadasis through the practice of Mahari dance provided the earliest known platform for the development of culture of Odisha, driven by Jagannath faith and philosophy. The Mahari dance of Devadasis spawned the development of both the world famous Odissi and the unique Gotipua dance forms of Odisha. These forms are one of the biggest culture exports of Odisha to the world culture.

Devadasis in Odisha were often referred to as Radhadasis symbolising the highest degree of pure and selfless love towards Jagannath who is Lord Krishna Himself. The dasi, by her submission, exercises proximity with Him. The Devadasi could deal directly with Him. She had a privileged standing and amongst the public, Devadasis were associated with auspiciousness and good luck. They were supposed to be in possession of the charm to ward off the evil eye. And they were regular invitees to functions celebrated in the royal court and in the households of Nobles.

The dasi of the Lord was betrothed to the Lord and their coming together had all the characteristics of a marriage ritual as is traditionally performed in Odisha. Immediately after the ceremonies, the training of the girl starts with lessons, imparted by her adoptive mother and her spiritual guru, mostly of devotional songs and the Puranas. She was given lessons in dance which continued for six or seven years or even longer while her ways were spartan. Her dress, except for the occasion of seva at the temple, was sober and devoid of the ostentatious. The entire period was devoid of any garishness and was always in the presence of the Lord. The connect with the Lord was complete and absolute and bereft of any worldly interests or luxuries. Only a Devadasi who stayed faithful to her Lord up to the end had the privilege of having her body, after death, covered with the same sari she received during her marriage with the Lord and having the embers for the cremation brought from the temple for her pyre.

At the Jagannath Temple, Mina Nayak is the title of the officer responsible for controlling the behaviour of the dasi and the public which is mentioned in a 17th century document still preserved at the temple. Records indicate 50 to 60 Devadasi houses existed in Puri at the beginning of the last century. The ritual services were divided among them and they were assigned duties in a roster. The Devadasis who sang inside the garbagruha (sanctum sanctorum) at the time of Bada-Singhara dhupa (the Lord’s dinner) were bhitara gayani.

Another batch consisted of nachuni, who danced in the audience hall adjoining the sanctum sactorum, the patuari, who accompanied the deity in processions and danced on the road; and the bahara gayani, who sang outside the temple usually accompanying the deity in a procession. The bhitare gaani were considered superior and had the privilege of being with the Lord in His private apartments every night before he went to sleep. She sang from the Geeta Govinda depicting mostly the sringara rasa. She stopped only when there were signs of the Lord dozing off, such as drooping eyelids, or the garland offered to Him by His wife Laxmi beginning to fade. At this juncture, the voice of the singer herself would begin to fade away gradually.

Dance was performed daily at the time of sakala dhupa or the midday meal also. The midday meal usually started when, with the door of the sanctum still closed, the offering of the food began, and it ended when the arati was performed after the completion of the meal. The duration of the dance depended on the length of the puja every day. The performance usually consisted of nritta (rhythmic dance), accompanied by the sound of the pakhawaj (percussive instrument) without any melody or song. Jagannath would have a clear, unhindered view of the dancer behind whom stood the Raj Guru with a golden cane, representing royal authority. The dancer would, at the beginning, execute a triple turn to be able to offer a triple obeisance to both God and King. The devotees present would stand and watch from both the sides, almost like an autrium.

Even outside the temple, during the Chandan Yatra, Champaka dwadasi (three days before the full moon of the lunar month of Jyestha (May-June) when the marriage of Krishna and Rukmini is celebrated), Hera Panchami and Rath Yatra, the Devadasi had a significant role in performing arts at the divine precinct.

The Record of Rights (RoR) of the temple indicated that there were about 25 Devadasis about a century ago and the Orissa Gazette of 1956 lists nine Devadasis and 11 musicians in the Puri temple. By 1980, only four Devadasis, Harapriya, Kokilaprava, Parshmani and Sashimani were left. After the demise of Sashimani Devi, the last Devadasi, in 2015, the age-old Devadasi tradition at the famous Sri Jagannath Temple has come to an end.

While no one knows the name of the first Devadasi of Puri, Sashimani Devi, the last Devadasi, died on March 19, 2015 at the age of 92. Her death made international news with extensive coverage in journals like The Economist and others.

Devadasi is divine romance – the foundation of an art form, Odissi, and the seed of aesthetics of Odisha.

10 Killed, 9 Injured As Bus Falls Into Gorge In Uttarakhand