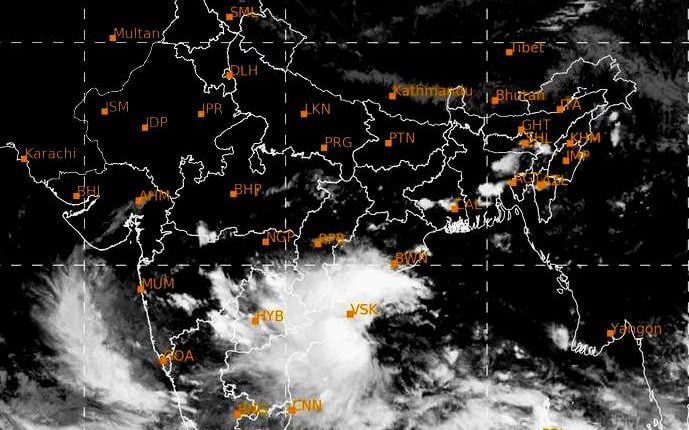 Bhubaneswar: The India Meteorological Department on Monday issued heavy rainfall warning for 10 coastal districts of Odisha as the depression over the Bay of Bengal further intensified into a deep depression.

“The depression over the west-central Bay of Bengal moved west­north-westwards with a speed of 6 kmph during past six hours intensified into a deep depression and lay centred about 250 km south-east of Vishakhapatnam, 290 km east­south-east of Kakinada and 330 km east­south-east of Narsapur (Andhra Pradesh) at 11.30 am on Monday. It is very likely to move west­northwestwards and cross north Andhra Pradesh coast between Narsapur and Visakhapatnam, close to Kakinada early on October 13 morning. Under its influence, most parts in the south coastal districts will receive heavy to very heavy rainfall in the next 24 hours which will continue for two days till October 13,” the IMD said in a mid-day bulletin.

Fishermen have been advised not to venture into the sea along and off Odisha coast and west-central Bay of Bengal and adjoining north-west Bay of Bengal till October 13 as squally wind speed reaching 50-60 kmph with gusting up to 70 kmph will make the sea condition rough to very rough.

In view of heavy rainfall forecast, IMD has issued orange and yellow warning for the following districts.

October 12
(Orange warning)
Heavy to very heavy rainfall at one or two places in Koraput, Rayagada, Malkangiri, Gajapati and Ganjam.

(Yellow warning)
Heavy rainfall at one or two places in Nabarangpur, Kandhamal, Puri and Khurda.

Bollywood Love Triangles: Actresses Who Fell For The Same Man