Here’s How Much Virus A COVID-Positive Person Exhales 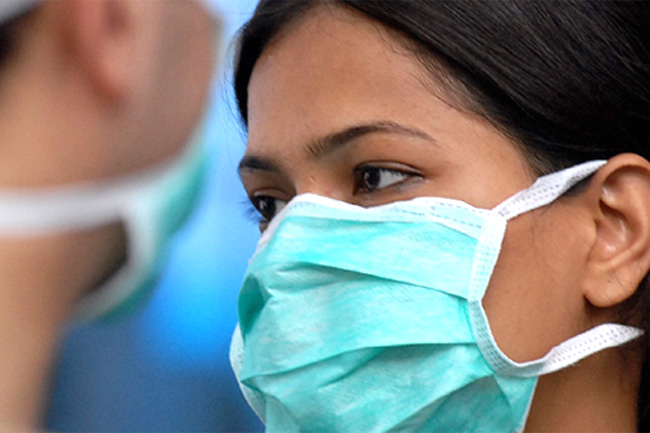 New Delhi: As India clocks more cases of Coronavirus once again, a new study has revealed that people diagnosed with Alpha, Delta, and Omicron variants of SARS-CoV-2 exhale more viral load into the air than those infected by other variants. The study looked at how much viral load a COVID-positive person exhales.

Aerosol inhalation is recognised as a major if not the primary mode of transmission of SARS-CoV-2 during the different phases of the pandemic. They build on the fact that natural selection favours variants with higher rates of viral aerosol shedding.

The study also indicates that people who contracted COVID-19 after getting double vaccinated, and even the booster dose, also exhale the virus into the air, India Today reported.

The study, which is yet to be peer-reviewed, has been published on the preprint server medRxiv. The researchers in the study have demonstrated that viral shedding (measured as RNA copies) into exhaled breath aerosol was significantly greater during infections with Alpha, Delta, and Omicron than with ancestral strains and variants not associated with increased transmissibility.

“The three highly transmissible variants independently evolved a high viral aerosol shedding phenotype, demonstrating convergent evolution. We did not observe statistically significant differences in rates of shedding between Alpha, Delta, and Omicron infections,” according to the paper.

The team of researchers from the Institute for Applied Environmental Health, University of Maryland School of Public Health analysed 93 people between mid-2020 and early 2022, who were infected by COVID-19. They all had different variants, including the Alpha, Delta, and Omicron.

The participants were made to face a cone-shaped apparatus and sing and shout into it with coughs and sneezes for 30 minutes. An attached machine collected the particles they were exhaling during the process. Dubbed Gesundheit-II, the device separated aerosol droplets measuring 5 micrometres that can linger in the air and leak through clothes or surgical masks.

Analysis revealed that people who had contracted the Alpha, Delta, and Omicron variants had higher viral load when exhaling compared to those infected by other variants.

The researchers in the paper said that the findings provide additional evidence that inhalation of infectious aerosols is the dominant mode of transmission. Kristen Coleman, a co-author of the study, told Nature that the study shows the need for people to push governments to invest in improving indoor air quality by improving ventilation and filtration systems.

They added that monitoring aerosol shedding from new SARS-CoV-2 variants and emerging pathogens will be an important component of future threat assessments and will help guide interventions to prevent transmission.