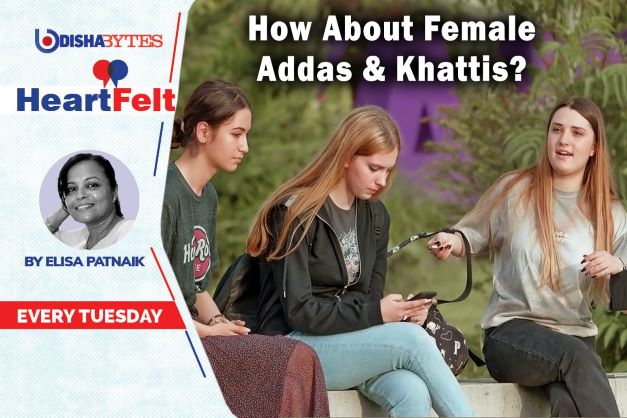 Imagine an all-female adda or an all-girls khatti closer to home in Odisha. It’s a socio-cultural practice where girls and women gather in the mornings or evenings in street corners, tea stalls and other public spaces to engage in animated conversations and informal yet passionate debates on politics, culture, ideas and everyday things over cups of tea/coffee and local snacks. A safe and enjoyable space where conversations flow freely over camaraderie, where members have each other’s back and do not hesitate to support in times of crisis and where participants network informally and benefit from each other’s associations. A powerful and radical image symbolising gender equality and safe urban space.

But alas, the only image of adda or khatti we actually see or conjure up is that of it being an exclusive male domain, an informal boys’ and men’s association that revel in male bonding, stimulating conversations and informal networking. A public space reserved for men and where women have no place. And yes, even the idea of an all-women adda may seem preposterous to many.

Adda (in West Bengal and other places) or khatti (in Odisha) is an informal gathering of a group in a particular locality, mostly in street corners, tea stalls or parks where conversations and discussions are the cornerstone. It’s kind of an unstructured hangout place where men make it a routine to meet every day, especially after sunset and the chats and banter between the informal members are long, flowing and relaxed in nature. The members usually belong to the locality and meet either in the mornings or evenings. So much so that the members reach their respective addas habitually at the designated time no matter what.

It is a way of life and key to many urban local residents. For many, it’s an essential part of the day where they unwind, debate, ponder on both serious and non-serious issues over cups of tea, smokes and local snacks. The topics of discussions range from politics, sports and weather to culture, art, and science. It’s also a place to share local gossips, confirm rumours, pick-up ideas and importantly, make contacts. There’s an adda or khatti grapevine too!

It is a common sight in urban public spaces. Each sitting continues for a couple of hours at least, when both young and older men after the day’s work or college/university classes are free to discuss and debate on the matters of the world. It’s an informal club of sorts with no rules or membership fees. And where women do not have the right to entry.

The adda or the khatti culture has been continuing for long, though earlier it was mainly confined to intellectual discussions by mostly upper and middle-class students and educated office goers (all males, of course) where they got together in college and university campuses, tea stalls and bookshops to converse, exchange information and express opinions. There are other chai addas known as tapris, lining the streets outside offices in cities, where usually there is a mix of both male and females though tilting more towards a dominant male presence.

However, overall adda and khatti is a cultural and social phenomenon that is primarily a male activity and clearly excludes females. Traditionally, girls and women due to their limited presence in public spaces were never a part of such gatherings which continues even till today. While in some progressive cities like Kolkata, a few women can be seen as part of some addas, it is unheard of in the khattis of Bhubaneswar and Cuttack. Men continue to be the dominant gender in the adda or khatti culture.

In spite of this, do women really have the right, freedom and comfort to have their own gatherings in public spaces akin to addas and khattis in the first place? Feminisation of public spaces has always been a challenge in India with women’s right to freely access public spaces extremely limited. And it continues to be so.

Agree, women have been getting together and meeting each other in coffee shops, parks, fairs and exhibitions but again, these meetings are in more protected and accepted spaces for women. Moreover, such encounters are sporadic meets and not regular affairs. Women meeting in public parks over morning and evening walks comes the closest to an exclusive female gathering, but again, it’s not the same and it doesn’t serve the same purpose as perhaps an adda.

The leisure, long hours, intellectual comraderies are definitely missing. Women cannot afford to be away from their homes almost every morning or evening to converse, linger and enjoy. And that too in street corners and tea stalls. After all, there’s dinner to be cooked and children’s homework to be completed.

And importantly, a group of women relaxing and conversing by occupying a common public space over cups of tea is a sight yet to be part of the socio-cultural dictionary or imagery in India. Or for that matter, to loiter in public space. A single woman or a group of women simply do not have the right or feel safe enough to be on their own on the streets. They usually do not have the mental ease or comfort to linger without a purpose or loiter beyond the designated point. And even if women meet and discuss on the streets, it’s usually quick, short and within the socially acceptable and permissible limits. Such characteristics makes these women spaces non adda-like.

Why Loiter?: Women & Risk on Mumbai Streets is a book written by Sameera Khan, Shilpa Phadke and Shilpa Ranade in 2011 that makes a case for loitering for women as a fundamental act of claiming public space and ultimately, a more inclusive citizenship. The writers argue that the right to loiter for all has the potential to undermine public space hierarchies. When they first talked about women’s right to pleasure in the city, they were met with resistance even in feminist circles. It was considered a frivolous demand considering that women still have to fight for their basic rights. However, more than ten years down the line, the idea of loitering as women’s right to public space is gradually becoming a part of the narrative for both feminists and young women in India.

Women are often missing from the streets or public spaces largely due to the real and implied risks associated with women’s presence in public including the spectre of violence that looms large and hence their perceived vulnerability. This singular focus and repeated violations prevent and inhibit them from being in public spaces without a specific purpose. However, the overemphasis on women’s vulnerability in public space challenges the fact that women face more violence in private spaces than in public spaces.

Likewise, the dominant patriarchal structure and practices often leads to physical and moral policing of women’s movements by the family, community and the state. Unfortunately, this has done little to advance women’s rights to public space and has rather resulted in curbing women’s freedom.

Although women’s access to urban public space has increased, they still do not have an equal claim to public space in cities. So, an all- women adda or khatti or a mixed one not only has the potential to create inclusive and diverse public spaces but also present a more empowering, positive and progressive image. It will encourage other women to venture out and enjoy being in the public equally as their male counterparts. How refreshing and enriching it will be for women to exchange experiences and share intellectually and culturally stimulating conversations! Importantly, with its power for bonding the adda culture is sure to boost female friendships and solidarity. Consequently helping in curbing instances of toxic masculinity displayed by some of the macho addas.

Despite the existence of other urban centres and hangout places like malls, coffee shops, pubs and restaurants, addas and khattis offer a unique opportunity for social interaction. There’s something liberating about reclaiming traditional and open public spaces. An act not just to improve awareness on women’s safety but also as a defiance against patriarchy which dictates them to remain within the confines of homes, especially after sunset. The mere presence of a few women relaxing on the streets has immense potential to bring about a conspicuous change and to act as the first step towards a bigger change propelling society and the government to alter their views.

Public spaces work as equalisers. Most people have unrestricted access to these, so why not women? While the physical presence of women in an adda or khatti like public space during dusk or late evening may not deem ‘fit and safe’ with many, it could be a revolutionary attempt to use public spaces as equal citizens — an exclusive space to network, share ideas, engage passionately in debates and indulge in tea-stall culture conversations. It could result in a radical shift in the conversation of what constitutes women’s rights, freedom and enjoyment of public space in India. And it’s only by promoting such progressive and radical ideas for Indian women that we can be truly equal. Think about it.