In The Land Of The Long Gone Nawabs & Gharials

TravelNews You Can Use 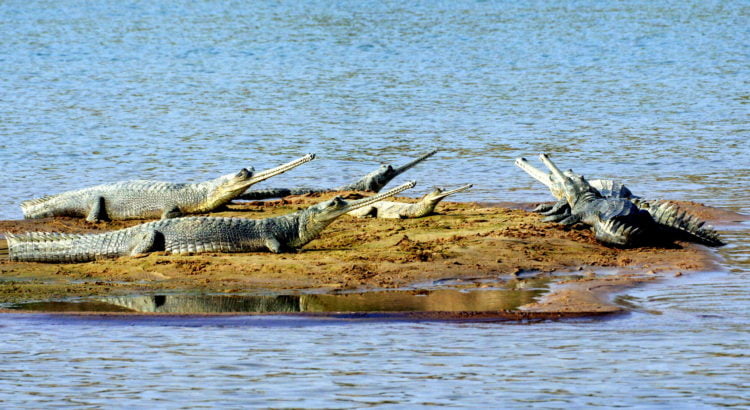 Lucknow is not on the usual tourist map. You end up there only if you have relatives there or some business interest. I went there for another reason. Something that is not entirely usual but again is also not unusual. At least I would like to think that way. Sonia, my wife, had a three-day conference to attend and I was to be her escort. As I am always eager to see a new place and the thought of roaming around a historic city aimlessly with nothing else to do and soaking in the atmosphere seemed too tempting, I readily agreed. Would I have agreed if a calling was made on me to be an escort for a place like, Muzzafarnagar or Indore? I have my doubts.

Another good part about the trip was that no demand was made on me to look after the tedious work of railway bookings and managing the finance that precedes all such outings. Things were taken care of by Sonia’s office. And Sonia in all her magnanimity announced that all my expenses would be borne by her.

During one of my sojourns, I took a rickshaw to Aminabad to have Tunde Mian’s Kebabs. Something on Tunde Miyan-Tunde Miyan was a famous Kababchi from Lucknow. His claim to fame is his “melt in your mouth” galauti kebabs. The name Tunde Mian came from the fact that he had just one arm. Another thing that made him famous (as heard from a descendant of Quereshi’s, another khansama line from Lucknow, now of Bukhara fame) was an act where he used to place an onion between his head and shoulder and then used to chop it into thin rings with amazing dexterity.

After a few minutes of walk from Kaiser Ganj Chowk, I reached a nondescript shop which carried the message, Grandson Tunde Mian. The place seemed out of sorts and dingy. All the cooking and preparations were kept and being made outside the restaurant, that is, right on the clustered, dusty and busy market. I was unsure of the authenticity of the claim so called up my colleague in Delhi, who is from nearby Kanpur and had claimed familiarity with Tunde’s mian’s kebabs. She told me I was standing in the right spot.

So I had my kebabs, with paranthas on the first floor of the restaurant. Did not find the experience anything out of the ordinary but at least had the satisfaction of knowing a legend.

In the course of my three day stay in the land of Nawabs of Awadh or Oudh as British pronounced it, I saw the famed Bara Imambara and Chota Imambara, bhulbulaiyan, the impressive Rumi Darwaza, which I am told is a copy of a similar one in Constantinople, and watched a kingfisher hovering over water and diving for fish in the Gomti river. I also saw evening aarti (ritualistic worship) on the banks of Gomti, something that has recent beginnings. It was a small affair unlike the big ‘tourist attracting’ event in Rishikesh or Varanasi on the Ganga. Gomti, unlike the Ganga, the most revered of the river, has very humble claims to religious sanctity. That showed in the act of aarti.

I liked the event though, as the participants, who must be around 40 in numbers, all lived nearby and seemed to know each other. During the course of conversation with the priest of one of the small riverbank temples, I had mentioned my being a journalist from Delhi. The priest, later on, turned out to be the main conductor of the aarti. I and Sonia were the only outsiders and thus got some well-meaning attention from the gathering. Maybe my taking pictures made them believe that they would be carried in the newspaper and thus their aarti would also become as celebrated as those which take place on the shores of the Ganges. Though nothing of the sort was going to happen I did not do or say anything to dash their hopes.

I did not make conversation with any locals except for a 1928 born boatman who also was a temple priest. He took me and Sonia on a boat trip on the calm Gomti after all the lights on the banks came up. The priest talked about his swimming exploits as a kid and later as a young man on the Gomti waters. He also claimed to have trained the area youngsters in the Olympic swimming disciplines, some of whom represented the state in national championships.

Besides I spoke to almost all the rickshaw pullers I travelled with and a travelled with quite a few, as I found taking a rickshaw was the best way to see the city. But all those conservations were only one-dimensional. The rickshawalah trying to convince me to see some chiken work (a style of cloth embroidery special to Lucknow) factory and I, trying to avoid the proposal as calmly as I could manage.
Things were pretty incident free till I met a stranger at Kukrail, the crocodile park at the northern end of the city.

I was observing a group of alligators spread motionlessly by the sides of an enclosed pond. The reptiles showed such a remarkable lack of motion that I had to (just to make sure they are alive) concentrate very hard to see any perceptible breathing movement on any of the ten or so reptiles. I was quite impressed by the seize these beasts had grown to. Their broad mouths unlike the narrow mouths of the Ghariyals, I had earlier seen in the park, looked menacing. I was also deep in thought trying to figure out and feeling envious of the kind of relaxed existence these reptiles led. It was then I saw a young man who seemed to be in his early twenties approach.

The man seemed to be from the Gangetic plains, maybe from some part of UP only. He came and stood next to me and assumed the ‘alligator observing posture’ of mine. After a few minutes of silent observation, he spoke the first words. “I guess given a chance one of these can gobble up a whole human being.” And added, “a crocodile’s grip is very hard to get rid off.” I nodded in agreement and added, “Unless the man decides to escape leaving behind a limb.  But I must tell you these are not crocodiles, but Alligators, the kind found in America.” He looked straight at me for a while and said, “These are magarmach , that is a crocodile.” “No,” I said. “Crocodiles are Ghariyals which have a narrow and long mouth. In the end, there is around protruding thing like a pot that’s the reason it is called Gharial. It is a crooked thing on him and thus the English name crocodile.”  I thought I had explained the point beyond further debate. But he seemed unconvinced. “These are crocodiles and Gharial is different,” he stuck to his point. “See the board on that tree says that these are crocodiles,” he said pointing to a board. That was true but I stuck to my guns. “It is wrongly written. If this is crocodile then what do you call a Ghariyal in English? And then, what you would say an Aligator is?” He did not have an answer. Then he spotted a group of youngsters in their school uniforms approaching. He was prompt. “What are these?” he asked. The youngsters who obviously had bunked school to loiter in the park and see some romantic couples which, could be seen in dense park corners, were taken aback by the question. Maybe the question reminded them of school, which they had just escaped from. Still one of them replied, rather nervously. “These are crocodiles,” said a student. “See I told you,” said the man immediately with a triumphant note. I was also quick to brush aside the kid’s authority on the subject. “The kid is merely reading from the board,” I said.

He seemed annoyed. “Are there any full-grown Gharials to see here?” he asked me. “Yes over there in a small tank there are three adult Ghariyals,” said I. “One day you will know that I was right,” were his parting words before he left to look for Gharials.

I, on the other hand, decided to troupe to the small nondescript Natural History Museum, part of the park, which, I had earlier decided to give a miss. In the dark interiors of the museum, I spotted an elderly man sitting and looking comprehensively bored. Around him were a few stuffed tigers and a stuffed Gharial. “What are those things on the nearby ponds,” I asked him, without thinking. “They are Crocodiles,” said he. “But I thought they were Alligators, the kind found in the USA. And if they are crocodiles then what do you call a Gharial in English,” was my response. He smiled and led me to a crumbling chart that hung on the museum wall. “See there are three varieties. A Crocodile, an Alligator and a Gharial. As Ghariyals are present only in the Indian subcontinent, they do not have an English name. They are called Ghariyals in English as well. As for Alligators, they are not here in India, so they are called Alligators in Hindi as well. Crocodiles, that you must have seen in the nearby pond, are here in India and abroad as well, and are called magarmachh in Hindi.” And he pointed to the chart which explained his point. I smiled, read the chart carefully and then stepped out of the museum, thanking the old man, who seemed quite pleased with himself.

I looked around to make sure the man I disagreed with wasn’t around and quickly made my way out of the park.

Earn Up To Rs 35 Lakh By Investing Rs 1,500 In This Post Office Scheme

Think Of Reusing Paper Before Recycling It; Here Are Eight Ways