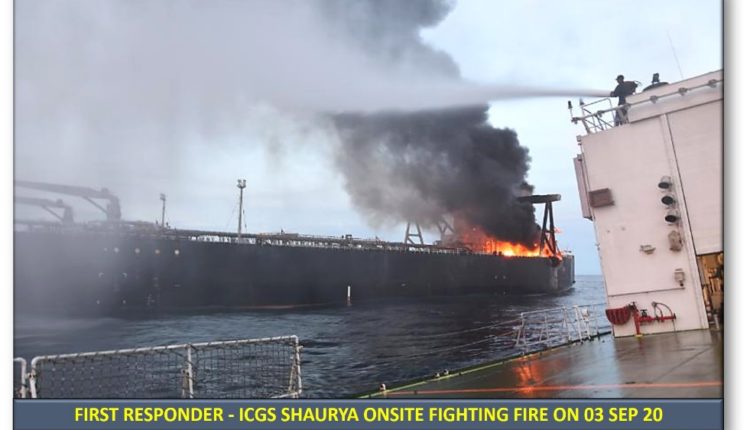 In an operation that lasted over 7 days, ICG doused an intense fire on the 333-metre long oil tanker — carrying 3 lakh Metric Tons of crude oil — off Sri Lanka’s east coast, thereby averting a massive disaster in the region which would have threatened the bio-diversified marine environment of Sri Lanka, Maldives and southern India.

The quantum of crude in this case was 270 times voluminuous than what MV Wakashio was loaded with in the recent oil-spill mishap off Mauritius last month which led to the declaration of national emergency by the Island nation.

MT New Diamond, a Panama-flagged vessel with 23 crew, was sailing from Kuwait to Paradip Port in India when it reported a fire due to boiler explosion on the morning of September 3, about 40NM (approx. 70 km) off Tirrukkovil in south-east Sri Lanka.

The distress message was picked up by Maritime Rescue Coordination Center (MRCC) Colombo as well as MRCC Mumbai. The Sri Lankan government requested immediate support from India as the threat of oil spill to the entire region was imminent.

A multi-mission capable offshore Patrol Vessel ICGS Shaurya was diverted and was the first ship to arrive at the scene and commence firefighting amid the fire and explosions. A joint effort by MRCC of ICG and Sri Lanka Navy ensured that 22 of the 23 crew members were rescued. 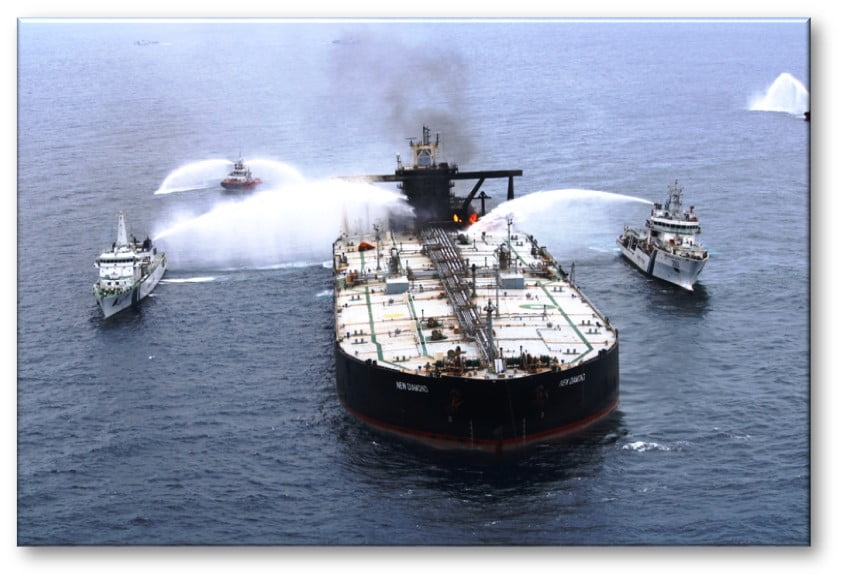 The timely efforts by ICGS Shaurya ensured that the fire was contained within the bridge and accommodation area, rather than spread to the cargo hold carrying huge volume of crude.

Six ICG ships, including specialist Pollution Response Vessel, and two Dornier aircraft were pressed into action to operate from Sri Lankan soil the day after, along with Lankan ships. Special-fit External Fire Fighting (EFF) system was used to spray foam for smothering the oil fire.

As the distressed vessel moved towards Lankan coast due to prevailing seasonal currents, ICG boarding team braved rough seas and adverse conditions to guide the under-fire unmanned tanker and connect the tow to Sri Lankan Tug TTT-1 to pull it away from land and position it favourably into the wind to prevent spread of fire to the forward section of the ship.

The fire was ultimately doused by September 6. ICG ships continued to monitor the situation, in case of re-eruption due to prevalent temperature and undertook surface-boundary cooling to reduce it around the cargo holds.

A huge explosion again occurred on the starboard diesel oil tank and huge flames reaching up to 60 metres from the deck were seen at the rear part of the ship. Sustained and close-quarter efforts by 4 ICG and 2 Sri Lankan ships and 3 salvour tugs helped in completely dousing the fire by September 8.

Oil water emulsion had escaped from the engine room to sea and led to formation of minor oil sheen. ICG Dornier aircraft was launched on September 9 to neutralise the sheen. The Kuwait export crude was prevented from escaping to the sea.