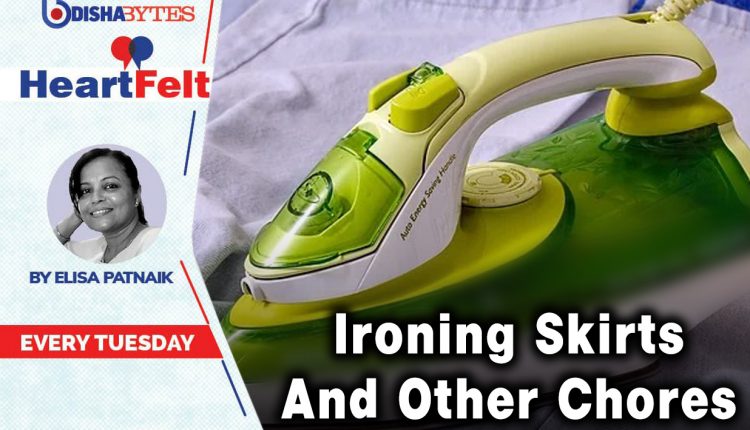 A few days back, I had to travel out of station for work. As usual, I was trying to finish off last-minute domestic chores and dispensing instructions to my husband and children. By the time I remembered to iron my 10-year-old daughter’s school PT uniform for the next day, I was already getting late for my flight.

I quickly asked my husband to do it while I completed my last-minute packing. Although he did not have any reservations about doing the chore, he gave me a completely befuddled look. “But I have never ironed a girl’s skirt before!” my bewildered husband said, to which I replied, “There’s always a first time, why don’t you try?”

So, off he went and after 15 minutes proudly displayed the neatly ironed skirt. “I ironed a skirt for the first time after nearly 50 years of my life,” he smiled.

“But I have been ironing skirts, shirts, sarees, kurtas pants,” all through my life,” I replied.

“Yes, seriously, women doing it for both the sexes seem like such a natural and normal phenomenon. I’ve never thought about it,” my husband remarked with a serious stance. We laughed at it, but it set both of us seriously contemplating.  While he was a tad sheepish, I was annoyed at the usual unfairness of such repeated instances.

How often do women end up cleaning and ironing clothes for the entire family? Starting from the husband’s clothes, children’s school uniforms and other clothes along with their own. And they do such a good job too, though no one bothers to thank them for it. It’s a woman’s job after all!

Ironically, there seems to be hardly anyone in the family to wash and iron a woman’s clothes, even if it is urgent or when she’s ill. Besides another woman, of course. Frankly, how many men know (or even attempt) to iron women’s clothes, like say a kurta, skirt, saree or blouse? My husband has done it a couple of times for me and I’ve seen my brothers doing it for their spouses but it is not a regular affair and is rather an exception.

I know of wives who pride themselves on packing for their husbands, ironing their clothes, and arranging them along with other accessories and undergarments. Many wives are also expected to do so. On the other hand, how many husbands would be able to do that for their partners? The same is the case with laundry and folding clothes.

Not considering the washing machine where the entire family’s clothes get washed, it’s women who primarily wash the clothes of all the men in a typical Indian household, including their undergarments. But the other way would be surely considered out of the ordinary or even blasphemous.

How come girls and women end up learning and doing all the chores, including those which were traditionally the domain of males like driving, repairing, assembling, buying groceries, and paying bills? While boys and men have continued to remain where they were, or rather taken a back seat, happily seeing their women doing it all.

One of my male friends says, “I had one job of dropping and picking up kids from their classes which my wife has now taken up after learning how to drive. I can read the newspapers in peace now.”

He meant it as a joke, like all other jokes targeted at ‘nagging women’ for ‘making men work.’ What propagates this archetype further is the representation of the “hapless, harried and clueless man” in domestic life in popular culture. Men’s lack of participation and interest in domestic chores is often trivialised and normalised in our families and society. So, while we see many women driving, how many men do we see managing kitchens in their own homes? Even when men do their bit of housekeeping and other domestic chores as bachelors, they automatically transfer the responsibilities to their wives once they get married.

We still empathise with boys and men who are ‘lost’ in the kitchen and other domestic spaces and smile sympathetically when mothers proudly declare that their poor sons don’t even know how to make a cup of tea! On the contrary, the most important criteria for a woman to get married is obviously, to be able to cook a scrumptious banquet for her in-laws and their extended family.

Although society and men’s attitude towards the inequality in the gendered division of labour have been changing, traditional norms and values still dominate when it comes to the home front. And while it’s true that men have picked up some of the household chores, a significant gap continues to overburden women. When it comes to unpaid, unrecognised housework, women are still the undeclared front runners.

Women are by default expected to be responsible for household chores even if they have hectic and urgent professional schedules. Women spend time working outside the home and come back home to the second shift of domestic chores. They put more time into cooking, cleaning, washing and tidying, amounting to several hours more than men, going through the drudgery multiple times in a day. Largely because of their social and cultural conditioning along with
the societal pressure to keep the house clean and tidy.

The Covid-19 lockdowns demonstrated this widespread discrimination in domestic spaces where women ended up cooking, washing, cleaning and caring for the entire family, even when they were working from home and their spouses were at home too. It’s not just limited to this obvious form of gender discrimination, there are layers of biases ingrained as well.

Domestic chores also happen to be gendered when we begin to break down the chores along gender lines. While the chores men typically do are usually outdoors, like maintaining vehicles, fetching groceries, repair and maintenance work etc., the chores women do are more indoors, like cleaning and cooking. Also, the chores which typically men do happen weekly or less often, and the ones which women do happen daily or several times a day. Cooking, dishes, mopping, laundry, ironing, tidying up etc. are not just monotonous but have to be done repeatedly in a day or in a week, as compared to say fetching groceries, washing the car or paying bills.

So, even when there’s no biological factor for domestic chores and no gender is physically inclined to do the dishes or clean the floors, household chores are divided into either female or male-typed depending on the physical and emotional caregiving nature or the frequency. Everyday chores like cooking, washing clothes, and cleaning are largely considered feminine while those not requiring daily attention like a car or home maintenance, bill payment etc. are perceived to be masculine. However, what is not taken into account is the emotional, mental and managerial load that women take up among all other things.

There seems to be an unspoken hierarchy of chores in the household as well, where certain male-aligned chores like buying groceries or mowing the lawn are less monotonous and hence are more preferred than say washing the dishes, or mopping the floor, scrubbing bathrooms or cleaning toilets. And certain chores when men do it occasionally, like cooking, are more rewarding as compared to women cooking multiple times every day.

Although more and more men are taking up chores lately, especially cooking, it’s important to consider that cooking is not only rewarding and relaxing but also considered sexy and appealing to men. But what about cleaning after a meal, wiping kitchen counters and washing up the utensils, plates and cutlery? Moreover, because of the sense of masculinity related to masculine chores, men tend to avoid chores that are considered feminine like sewing, ironing, etc.

It’s also seen that in some Indian families, while boys are rewarded for doing the laundry, making the bed and doing the dishes, it is accepted as something natural when girls do it and hence not worth any remuneration. I find it infuriating that men are not obligated to do household chores like women and it’s more of a bonus, a choice or hobby (like cooking) when they do.

Women are considered lucky if their spouses cook dinners or do the laundry. Also, assumptions that when a man does all kinds of domestic chores, he is either ‘domesticated’ or the woman has somehow done less than she should – not only perpetuate stereotypes but also make women feel guilty about their identity and roles.

Unfortunately, when women start questioning and confronting these gender norms, they are either labelled as nags or as peacebreakers. No wonder women prefer to do it themselves rather than stirring the hornet’s nest.

While people are open to women’s equality at work, they are not so when it comes to equality in sharing domestic chores and caregiving responsibilities at home. True equality is possible only when men take up chores typically meant for women including caregiving and child nurturing responsibilities. Boys and sons in families should be given as many chores as girls and daughters.

Importantly, it’s only by being aware of this sexism and gender inequality and accepting it that we can make changes in our own homes and lives. And as for women, there is certainly no joy in priding ourselves as to how we can do it all. Also,
there is no shame in asking men to be equally responsible for the domestic chores.

So, ask for the skirt to be ironed, the button to be sewed and the floor to be mopped.