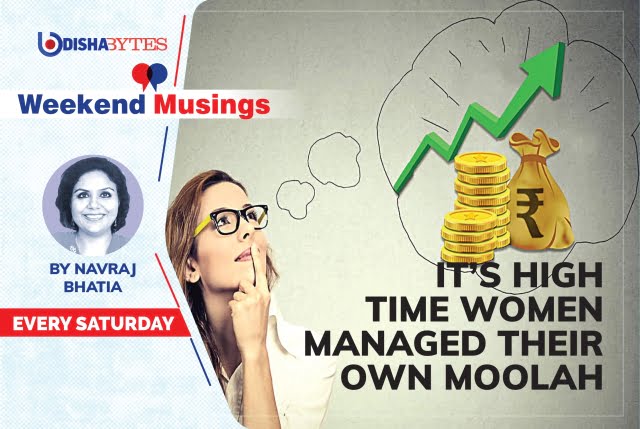 All around me, I see single women struggling to manage their finances. They are single by choice, divorced, separated or widowed. Whatever their status, they don’t know ‘F’ of finance.

Considered a male domain by virtue of the man being the breadwinner of the family, most often women have no say in the family’s financial planning. They are not even given a choice. Their only role is to save money for an emergency by stashing it away bit by bit or ‘investing’ money in a pool, known as ‘kitty’ in common parlance, which too, comes in handy for the husband or children in the time of dire need.

As a result, women find themselves at sea when they get widowed and end up getting cheated, those getting divorced don’t know their rights and some endure a bad marriage for fear of being a burden on their parents. Unfortunately, unlike the developed world, Indian law does not recognise marriage as a contract and therefore there is nothing like ‘pre-nups’ to secure a woman’s finances. Even Islam takes care of a woman’s financial interests in the form ‘meher’ considered her ‘haq’ or right.

I know of an educated woman who was a professional before childbirth and separated from her husband after 20 years of marriage. She has no idea of how much he earns or his assets. All she knows is there is not a single property, policy, or investment in her name. Needless to say, she feels cheated and is now buying time before asking for a divorce to ‘educate’ herself in finances.

Another young girl living separately from her husband after five years of marriage and a baby is too ‘ashamed’ to ask for money because she is the one who walked out of his house over compatibility issues.

Yet another girl has managed to revive her career rather than have anything to do with her ‘bad husband’ of one year.

My childhood friend’s husband left her virtually penniless in a foreign country after 30 years of marriage and two grown-up children. All because she never questioned how he managed finances and had blind faith in him.

It breaks my heart to see all of them. Financial planning is imperative for women, irrespective of their marital status. They should secure their own future by making the right financial decisions instead of depending on spouses, brothers, and fathers.

For this, we must start early. It remains a mystery to me why females are considered weak at numbers by birth. Invariably, a girl child who is average in numbers is encouraged to drop Maths and take up an easier subject ‘suitable for girls’ whereas parents will go to any length to ensure that their son, who may be a nincompoop, pursues Maths because he has to ‘run the family’ one day.

The problem begins at home with parents conditioning and convincing their daughters into believing that they are being educated only to ‘make them capable’ of earning should the need arise. At best, theirs should be a supplementary income, they are told because after all, who will take care of the house and children?

There is another set of parents who feel insecure about letting their daughters accept high-paying jobs for fear of not being able to find a match for her. Besides, ‘girls become too self-willed’ once they start earning. In other words, women are not allowed to touch finances even with a barge pole.

Apart from all this, there is an inherent bias against women who choose to secure their financial interests and it does not take long for them to be branded ‘selfish.’ There are more crass words in Hindi such as ‘kamini,’ ‘chalu’ and ‘kutti cheez.’ A man doing the same thing would be ‘wise,’ ‘hardworking’ and ‘enterprising.’

We should worry more about securing the future of our daughters by training them in handling finances rather than talking to them about marriage goals and the responsibilities that come with it. It is beyond me here not to mention an old slogan by an insurance company that makes my blood curdle even now: ‘Bete ki padhai aur beti ki shaadi.’

Perhaps financial companies can help in shaping attitudes and start training programmes for women in managing finances.  If they do exist, I plead ignorance. That also speaks of the lack of awareness about them and the need for them to up the ante to make such programmes popular.