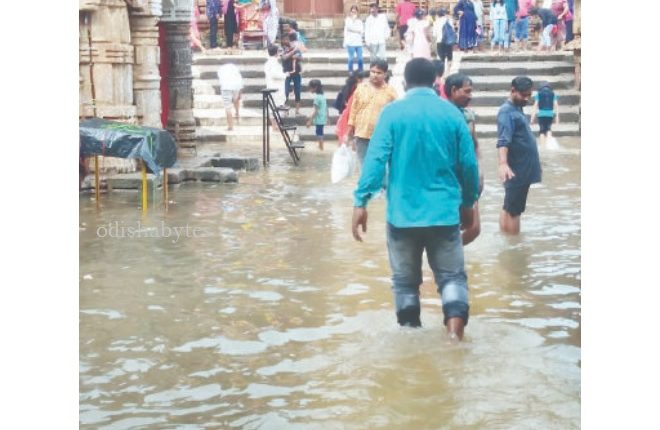 Bhubaneswar: The continuous rainfall on Saturday led to waterlogging in several low-lying areas of Odisha capital. One of the worst affected places was the Lingaraj temple in Old Town.

Due to overnight spell of heavy rain, the entire premises of the 11th-century temple was waterlogged on Sunday morning. Though the temple has open drainage systems to allow the outflow of rainwater, the channels were blocked by filth and soil due to heavy flow of water.

As the temple was submerged in knee-deep water for nearly one and a half hours, the sevayats could not enter the temple nor those who were inside could come out. The devotees were also stuck inside the temple.

As a result, the rituals of the deities in different temples on the premises could not be held in time in the morning. The ‘Natya Mandap’, Basua Balada temple and Parvati temple were submerged. Later, the rainwater was drained out from the temple with a motor.

Water logging has been a perennial problem in Lingaraj temple for the last few years. The sevayats alleged that the  situation has been recurring due to lack of regular inspection by the administration. The devotees also expressed their resentment on the waterlogging. “One day, the temple will collapse as the soil beneath it will give way to rainwater It is high time the authorities took urgent steps in this regard ,” said a devotee.

Meanwhile, a team from Archaeological Survey of India (ASI) including superintendent Arun Kumar Mallick and other senior officials visited the temple on the day and assessed the situation. They also inspected ‘Garbha Gruha’ (sanctum sanctorum). “All the cracks in the Garbha Gruha will be repaired soon,” said the officials.