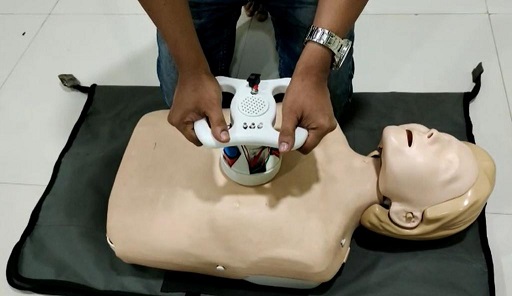 New Delhi: An Indian-origin doctor battled for five hours as he saved a passenger’s life on a long-haul flight to India. Dr Vishwaraj Vemala, who is a consultant hepatologist in Birmingham, was on a 10-hour flight when a 43-year-old old man went into cardiac arrest and collapsed in the aisle. Aided by medical supplies on board and items from passengers, Dr Vemala twice resuscitated his fellow passenger and stated that he would remember the experience for the rest of his life.

It took the doctor about an hour of resuscitation before the passenger regained consciousness. During this time, Dr Vemala asked the cabin crew on board if they had any medication. “Luckily, they had an emergency kit, which to my utter surprise, included resuscitative medication to enable life support,” he said. However, he added that “Apart from oxygen and an automated external defibrillator, there was no other equipment on board to monitor how he was doing.”

After speaking to other passengers on board the flight, Dr Vemala was thankfully able to get his hands on a heart-rate monitor, blood pressure machine, pulse oximeter and glucose meter to check the man’s vital. But the passenger, who was speaking with the doctor after regaining consciousness, abruptly went into cardiac arrest again, requiring even more lengthy resuscitation.

With a growing concern for the passenger’s condition, the pilot arranged for a landing at Mumbai Airport where emergency crews took over and the passenger was taken to safety.

The case of a 20-year-old girl

In March last year, Kashif N Chaudhry, Director of Cardiac Electrophysiology at UPMC, shared a hair-raising account of a mid-air cardiac arrest. He recounted how on his flight to Phoenix, a young lady in her 20s passed out after a cardiac arrest and the appropriate response and timely CPR saved her life.

“Cardiac Arrest 35,000 feet in the air. Earlier today, on our flight to Phoenix, a young lady in her 20s passed out. Screams of panic by onlookers was quickly followed by announcement of a medical emergency,” tweeted Dr Chaudhry.

“I reflexly ran to her seat. She was unresponsive, slumped over, eyes rolled back. I checked her carotid and radial pulses, she had none. We carried her on to the aisle & started CPR immediately. We quickly formed a team. My wife @NailaShereen and another cardiologist on board quickly divided tasks. While I performed CPR, the other cardiologist got an AED from the plane’s first aid kit & applied it on the patient while Naila gathered relevant history from the patient’s accompanying friends and communicated with, abd updated a medical team on the ground. Thankfully, just after 90 seconds of CPR, our patient regained a pulse and was starting to be somewhat arousable. Within 10 mins, she was able to sit up and with support, we got her back to her seat,” he further wrote in his tweets. The plane was diverted to the nearest airport and by the time it landed, the lady was far more oriented.

The passenger, Younus Rayanroth, was on a Go First flight last year, going from Kannur to Dubai when he suffered a cardiac arrest. “As the passenger shouted for help, the Go First cabin crew immediately ran towards the passenger and found him unconscious with no pulse and no breathing. Not a second was wasted, with help of other passengers the casualty was placed on the aft galley floor and the crew began the cardiopulmonary resuscitation, or CPR, process.

“Fortunately, a doctor, Dr Shabar Ahmed, was also traveling on the same flight, and he treated the casualty with two sets of automated external defibrillators (AED) shock, followed by five Sets of CPR. The doctor together with the cabin crew resuscitated the customer back to life,” the airline said in the statement.

The passenger was later put on oxygen and placed in a recovery position, and he eventually regained consciousness.

The importance of CPR

Highlighting the importance of timely CPR, Dr Kashif N Chaudhry said it can make all the difference in a life and death situation, and that one must learn it to be able to potentially save somebody’s life.

“In a cardiac arrest, time is of the essence. Prompt & effective CPR is often the difference between life & death. Please learn CPR. You could be in a position to potentially save someone’s life someday, and they are likely going to be a loved one.”

According to Medical News Today, here are the steps to perform CPR:

2. Lay the person on their back and open their airways

3. If they are not breathing, start CPR

6. Repeat until an ambulance or AED arrives