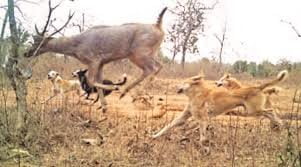 New Delhi: The 2018 tiger survey data shows that more feral and abandoned dogs were camera-trapped than tigers in 17 tiger reserves. Presence of both dogs and livestock in significant numbers was recorded in at least 30 tiger reserves.

According to The Indian Express report, specialists said that the proliferation of these dogs and livestock, inside forests, carries the risk of transmission of various diseases to wildlife and are also seen competing with wild animals for resources.

While Environment Ministry officials claimed that “these domestic animals were spotted mostly in the peripheral forests away from the core” areas, however, the quadrennial tiger report does not provide any spatial data on the territorial extent of the tiger reserves the dogs and livestock were photographed.

“We are aware of this problem. Livestock and dogs are found in certain fringe areas close to villages. In view of threats such as canine distemper virus, etc., we are trying to minimise the interaction between these domestic species and wildlife,” SP Yadav, member secretary, National Tiger Conservation Authority (NTCA), was quoted as saying by The Indian Express. NTCA conducts the quadrennial all-India survey.

Milind Pariwakam of Wildlife Conservation Trust studies disease prevalence in livestock around tiger reserves. A wildlife biologist from the trust reportedly said, “It is encouraging that domestic species are also being monitored in the tiger estimation. One needs to look at the spatial overlaps between domestic dogs and livestock, and wild species. Dogs compete with wild canids which are even more endangered than the tiger.”

According to the reports, a study in 2017 found that domestic dogs killed more livestock than those hunted by snow leopards and wolves combined in the upper Spiti landscape of Himachal Pradesh. Elsewhere, too, they compete with smaller carnivores. In the same year, a global study published in the journal Biological Conservation said domestic dogs contributed to 11 vertebrate extinctions and pose a risk to at least 188 threatened species worldwide.

“I have seen domestic dogs kill leopard cubs, snatch kills from wolves and chase away hyenas right inside the tiger reserve. Their presence causes stressed behaviour in prey species such as nilgai, affecting foraging patterns,” said wildlife biologist Dharmendra Khandal, who has been studying Rajasthan’s Ranthambhore landscape for over a decade.

Earlier in 2018, a sub-continent scale assessment published in the Zoological Society of London’s journal Animal Conservation, found that dogs unaccompanied by humans were behind two-thirds of the attacks.

Underlining that most attacks were by packs of dogs and nearly half of those led to the death of the prey, the study recommended a multi-pronged approach of responsible dog ownership, restriction in free-ranging behaviour, and strong population control measures, especially around sensitive conservation areas.

COVID Crisis: Railways To Run ‘Oxygen Express’; LMO To Be Loaded From Odisha’s…