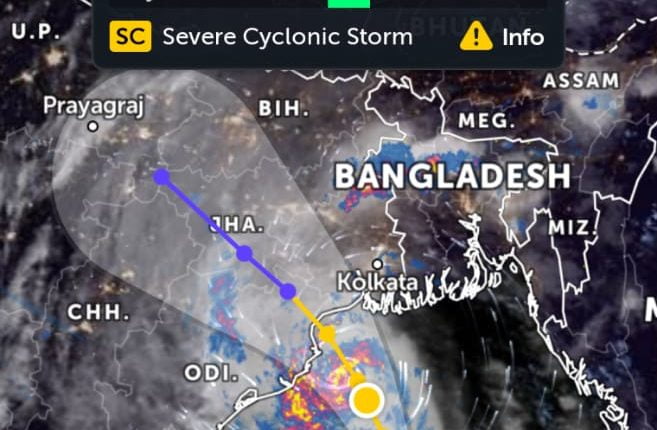 As I sat sipping my cup of tea, while outside the deepening evening cast a turquoise blue in the sky, with a light drizzle accompanied by a stillness in the air that got punctuated with an occasional gust of wind; my mind went back to around the same time last year.

I recollected the time of the evening then, as the wind was slowly picking up and I sat in anticipation of the impending Cyclone Amphan, under the cover of darkness, the electricity having been cut off, and a dreary lockdown on the street outside. I took to my notebook and pen as the solace of the times, allowed my thoughts to take form in words as the night awaited itself out, until the next morning.

Yes, it was May 20, 2020, and today, May 26, 2021; not much discernible a time in the annular calendar of the 4.5 billion years of Earth’s existence or 6 million years of ancestral human existence. Time has no boundaries to confront and is monocular in its forward movement…only the human mind can recall it, as much as I do now.

It is almost a repeat of the same time: an impending Cyclone Yaas, a non-living minuscule being named novel coronacirus gone awry and a mind trying to grasp the proximity of it all. As I recall here my published article of last year on these pages…how similar, I wonder, as I awaited the denouement of Cyclone Yaas to unfold; though with a fervent prayer on my lips:

“Lord, could you not swing away dear Yaas from us mortals, like you did with Amphan last year, to save us the carnage once again!”

As the latest live satellite picture predicted the landfall near Balasore early Wednesday morning, I gathered some interpretations on Cyclone Yaas:

The word ‘Yaas’, named by Oman as per the protocol of the 13 countries of the World Meteorological Organisation/United Nations Economic and Social Commission for Asia and Pacific (WMO/ESCAP) Panel on Tropical Cyclones that name the Cyclones in turn; ‘Yaas’ means ‘Jasmin’ in English from the original Persian word. My curious mind, however, could not stop contemplating the name of a beautiful flower being associated with the fury of a Tropical Cyclone. At least the name ‘Fani’, given by Bangladesh to another such recent occurrence lived up to its name, associated with the hood of the Cobra snake. In a lighter vein, we could only wish for ‘Jasmin’ to remain as sweet and pass over limiting itself to our olfactory nerves!

Cyclone Yaas is the second cyclone to hit India within two weeks: A double whammy of sorts at a time when India is confronted with the fastest rising rate of COVID-19 infections in the world; thus testing the resilience and stretch of India’s infrastructure and its people. Needless to say, it calls for the nation to stand together, support the administration and share in contributing to the welfare of our population. It reminds me the words of Napoleon Bonaparte, who said:

“It is in times of difficulty that great nations like great men display the whole energy of their character and become an object of admiration to posterity.”

On a more metaphorical sense, in these trying times, let me repeat the words of Brutus, in the Shakespearean play, Julius Ceaser:

“There is a tide in the affairs of men. Which taken at the flood, leads on to fortune.”

With the belief of Brutus in mind, none can deny the need of every Indian to rise to the occasion, see the present coming together of calamities (when troubles come they come in battalions and not in platoons, as an army man would say) as opportunities to stand up to them boldly and confront with confidence.

As we are beset with the present situation, we must gather our wares collectively in the finest organizational manner, both as responsible citizens and also as duty-bound servants of responsibilities bestowed on us by virtue of our profession. We must respond in accordance with laid down procedures; be it centrally or locally. India, having been subjected to a multitude of natural calamities over the years, we as a people have been annealed in the hearth of Nature and need no reminders for it to experience. The pincer effects of these have honed us and the policy makers, to have in place a set of measures that have been tested over and fine-tuned with every emerging situation.

Take the case of Odisha. The state came of age and learnt its hard lesson from the devastating 1999 Super Cyclone, in which around 10,000 people perished. This emboldened the state machinery to put in place a broad-based disaster management programme that was further tested in the handling of the Cyclone Phailin, which hit Odisha in October 2013, that saw the Odisha Government evacuating around one million people from the seaside areas to reduce the death toll to 21; a miracle of sorts. In response, the then UN Special Representative of the Secretary General for Disaster Risk Reduction, Margareta Wahlstrom, had said at an event in Bhubaneswar, “Today, Odisha is a global leader in disaster management and risk reduction”. Further, the United Nations felicitated Chief Minister Naveen Patnaik by presenting a citation and invited him to attend an International Conference on Disaster Risk Reduction, being held in Japan in 2015.

Ever since that day, Odisha has faced all natural disasters, especially the cyclones, with confidence and has even sent its disaster management teams to other states in aid of risk reduction; as was seen recently in sending its team to Gujarat, which was hit by Cyclone Tauktae a few days back. Odisha will do it again for itself, this time too.

There are many a positives to collect from these cyclone experiences. While Nature plays its part, let us too play ours in unison with our resources in hand and make every effort to withstand the onslaught, short of taming it.

As Cyclone Yaas makes its landfall, in these hours of our reckoning, let me invoke the words of Winston Churchill, who told the people during the devastating Battle of Britain:

“Fear is a reaction. Courage is a decision.”

People of Odisha, Balasore in particular, you have nothing to look back for, except to meet Mother Nature fearlessly square in her face. Remain rock-steady with confidence rooted to Mother Earth and valiantly stand firm as the fury rages…for, it too will pass. A morrow will rise, we will view the full Moon tomorrow and pay obeisance to Buddha on the occasion of Buddha Jayanti.