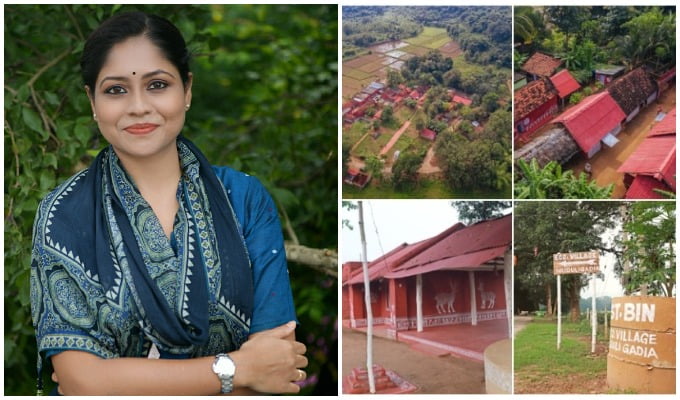 The first government official from Odisha to receive this award, Das was honored for her outstanding work in the field of forest and wildlife conservation during her stint as the Divisional Forest Officer (DFO), Mahanadi Wildlife Division.

The award function this year was hosted online due to the COVID-19 pandemic. All the eight awardees this year, including Das, were felicitated in the presence of Assistant Secretary-General of United Nations and Executive Secretary of the Convention on Biological Diversity Elizabeth Maruma Mrema, NITI Aayog Member Prof Ramesh Chand, and British economist and climate change authority Lord Nicholas Stern, among others.

Odisha Bytes caught up with Das to understand the trail of events that led to the success of ecotourism — responsible travel to natural areas that conserves the environment, sustains the well-being of the local people, and involves interpretation and education — in Odisha. Excerpts:

Anshu Pragnya Das, the name is synonymous with innovation in ecotourism in Odisha, and now, the ‘Green Warrior’ and protector of tiger habitat tags. How do you feel about it?

I feel content. Wildlife conservation and ecotourism are two sides of the same coin as both are aimed at environmental protection. The most imminent threat to wildlife is increasing human-related pressures over time.

Conservation efforts can bring good results only if there is support from local people. Ecotourism is one such segment that not only works for the economic development of the locals but also ensures social well-being, besides environmental benefits to all. Biological factors and the economic condition of the people go hand-in-hand. While wildlife habitats play an important role in balancing the ecosystem, ecotourism helps in raising the living conditions of the locals in wildlife habitats and nature education for the people within and outside forest and wildlife areas, especially for our future generation.

Ecotourism as an alternative livelihood option for the forest-dependent communities has helped in inculcating good practices in our rural culture. We have to be fair and just to every stakeholder in wildlife areas.

Our thoughts and actions should always be free from any conventional wisdom. Being a government servant, for me, work is a journey in progress.

How did it all begin? Was the initiative to involve villagers to contain poachers in Satkosia way back in 2015, the first step towards more inclusive development of people residing there?

Every landscape has its own pulls and pressures. Population pressure, non-cooperation of locals for conservation, traditional hunting practices, and complex demography exist in the Satkosia landscape. When we started implementing the management plan prescriptions in 2015, me and my front line staff faced resentment from locals, who were against the construction of anti-poaching camps, the establishment of VHF network, recruitment of squads as well as against every other action taken by us for protection of wildlife and it’s habitat.

To be able to get local support, improving their quality of life was important for us. Gradually we started addressing their pending grievances and with the help of other line departments, we developed all-weather roads, electricity, and alternative livelihood for reducing dependence on forest. All of these efforts got us public support and we could do many things for the conservation of wildlife such as setting up anti-poaching camps in all vulnerable pockets, VHF networking all through, engagement of women in squads, the arrest of many poachers, strong informer network, and the most important thing is we could create inviolate space for the breeding of wildlife.

Ecotourism helped us a lot in getting support from all stakeholders of the Tiger landscape- local households, public representatives, voluntary organizations, and all others. We engaged local communities, rural women, few traditional poachers in different ecotourism activities. The support of the locals for conservation initiatives has gradually strengthened.

What was the idea behind the Community Managed Nature Tourism program launched in 2016?

The Forest and Environment Department launched the Community Model of Ecotourism in the state during 2016. The idea was to provide alternative employment to the forest dwellers through ecotourism, reduce dependence on forest, and also to educate people on the rich natural resources of Odisha.

A common booking portal and good infrastructure have been created at 47 locations and different activities have been introduced there. Since 2016, there has been a four-fold increase in revenue along with an increase in tourists footfall to Odisha. Different types of infrastructures (tents/cottages/wooden cottages/bamboo huts) were later put up at different places and by 2019-20, more than 330 rooms for accommodating one thousand tourists were made available.

What was the objective behind the ecotourism project at Badmul and how was it laid out for tourists?

The Badmul project overlooking the Satkosia gorge started in 2015- 2016 with three tented accommodations run by eight villagers. Now, the project includes 19 tents and cottages managed by 34 villagers benefitting eight 8 to 10 riverine villages of Nayagarh district. It has turned to be a favorite place for backpackers and novelists. Gradually, the turnover of the project increased from Rs 4 lakh in 2016 to Rs 1 crore during 2019. This could be achieved only because of the hard work of the community members and the cooperation of locals and frontline staff.

The idea behind this project was to reduce dependence on the forest by providing alternative livelihood to the local community. Now the project is a source of employment for many riverine villages adjoining Satkosia Gorge on the Mahanadi.

Tell us about the idea behind ecovillage Muduligadi.

The concept behind an ecovillage is to live independent of forest resources. With 10 percent share from ecotourism revenue earned from Badmul Ecotourism project, the villagers with our support made their village self-sustainable. Being on the foothills of Satkosia Tiger Reserve, firewood was used in every household for cooking, open defecation was common, river water used for drinking, and taking bath.  The success of the ecotourism project brought about a sea change in the lifestyle of the forest-dependent communities here. All 35 households in the village have been using LPG gas instead of firewood for the last three years. Water connectivity has been established in all homes, thus negating their dependence and exploitation of the riverine water.

— Through active awareness and education, the community was persuaded to set up toilets in their houses and turned their village Open Defecation Free in 2019. Water connectivity to all toilets was established by EDC share of the revenue from ecotourism Some community toilets were also set up for further convenience.

— Weeds within and in the periphery of the village have been uprooted and replaced by grass.

— Cow dung is being used as manure for farming instead of chemical fertilizers.

— Cleanliness and hygiene have become the main mantras of the village.

— All the houses have been repaired and made tourist-friendly with colorful verandahs and nice wall paintings done by the villagers themselves. Trees and roads have been well decorated for welcoming tourists visiting the landscape.

— They have also built a common puja place for the entire village overlooking the mountains of Satkosia.

How has ecotourism helped Odisha win recognition worldwide and sustain its own greens?

Odisha is rich in forests and wildlife resources, beautiful valleys, sky-touching mountains, mesmerizing rivers, and thousands of streams. Because of ecotourism, people from all over the world are getting a chance to visit Odisha and witness its diversity. Odisha falls in multiple biogeographic provinces. The unspoiled coastline, valleys, mountains, a variety of wildlife, different festivals, and beautiful people make our state unique. Travelling is not only about sighting animals or eating good food, it is more about discovering places and ourselves.

The reason for such transformation is the evolution of community-based ecotourism in our state, a dedicated scheme, common booking portal, advanced promotions, good infrastructures, and the addition of different activities that have contributed a lot in bringing Odisha Ecotourism to the forefront.

You have also been commended for your efforts towards the revival of endangered gharial in the Mahanadi riverine. Tell us about this initiative.

Satkosia Gorge in River Mahanadi is a part of the core area of Satkosia Tiger Reserve. During 2015, we closed illegal fishing in the gorge and provided an alternative job to them by MGNREGS and ecotourism initiatives.

The step for making the core inviolate was necessary for reviving the core/breeding area of wildlife. The gorge is also a potential migration path for animals from both sides of the river. Every achievement has its own attributes, this was possible because of teamwork and transparency.

Das is an accomplished birder, photographer, and writer and has deployed these skills to create an interest in the states’ wildlife and biodiversity. Her publications ‘Avifauna of Satkosia’, ‘Satkosia Seen and Unseen’, and ‘Birds of Satkosia Landscape’ have garnered much attention from the government and birders alike.

US Woman Raped In Rishikesh

Ecotourism camp at Mangalajodi welcomes its first batch of…