Online Shopping: To Buy Or Not To Buy 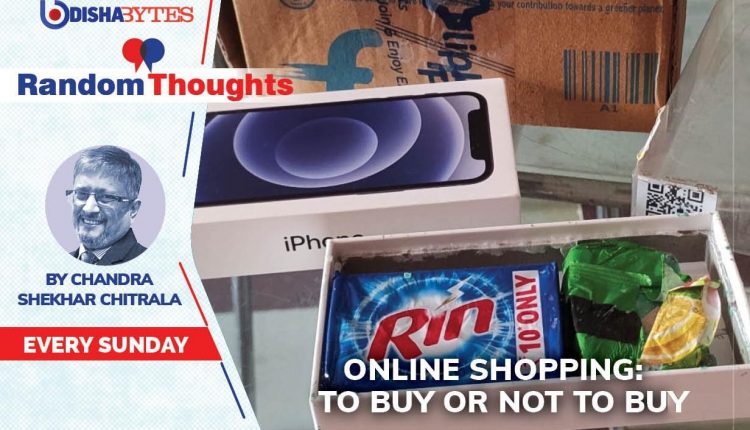 I think I will never be able to get over the shock that I received when instead of seeing a shiny new iPhone, my eyes fell on a rather battered cake of Rin and half a cake of Vim in the pack.

As an IT entrepreneur, I have been an early adopter of online shopping and have been buying phones for myself as well as my family online since 2014.

As a matter of fact, I had purchased an iPhone from Amazon for my daughter just a fortnight back. Which is why even in my wildest dreams I had not imagined that something like this could happen through an order placed on Flipkart.

My first reaction after taking pictures of the box and the soaps inside was to call the delivery executive. While he expressed shock, he firmly refused to come back (it was hardly five minutes after he delivered the phone), and instead said I should go to their delivery hub.

I then contacted Flipkart support through text chat on their app. After being tossed between multiple support executives, I was finally told that they were initiating a return of the product.

While I felt relieved, I also tweeted about this, and received a prompt reply from their social media team asking for the order details. Incidentally, I also got a rather rude comment from someone saying I was a fake buyer trying to con Flipkart!

I also shared my experience on Facebook and some of my friends reshared my post. On one such share, there was a comment that as Flipkart had an “Open Box” option where buyers could open the box and check the items before accepting the delivery, the buyer was either a fool or a trickster trying to make a fast buck.

Later that evening, I received an email from Flipkart asking for a scanned copy/ clear photo of both sides of Aadhaar or Driving License or Voter ID, a full image of the product received (front side of the product) and an image of the manufacturing label (manufacturing date, expiry date, etc.) which I promptly sent to them, and went to bed thinking that now it was just a matter of time before I would either get a refund of my payment or another phone.

However, I was in for a rude shock when the next morning I received a rather terse reply from Flipkart saying “Since we had requested for a few images of the product received by you and it was not shared with us within {TAT}, the return request could not be processed by the seller.”

Horrified, I immediately replied saying that as I had received soaps, how could I send pictures of the iPhone?

I also put this as a reply to the social media team of Flipkart on Twitter as well as an update to my post on Facebook.

Seeing my post on Facebook, a friend who is also a fellow alumnus of XIMB sent me the contact details of another alumna who is currently a Director at Flipkart. I reached out to her and sent the details of the issue. She was travelling, but even so, she replied that she would look into the matter.

In the meantime, the Flipkart social media team responded to me on Twitter and asked me to send the order ID through a private message, which I did, and they said they would be escalating the issue and promised a resolution.

I was then contacted by the Flipkart Escalations team and was told that they were taking complete ownership of the case and would solve the same with the best possible resolution available with them.

I was asked to send another ID proof document and was asked to give my consent to their lodging an FIR against the seller. I was also contacted by a member of their Investigation team who asked if I had prior contact with the delivery executive and about the condition of the package. I told him that I had never interacted with the delivery executive earlier and that I had accepted the package from him only after verifying that the shipping label was intact as was instructed on the package.

I was then informed that they would be providing a resolution within a maximum of 12 days, with updates in between.

Simultaneously, my fellow XIMB alumnus at Flipkart also assured me that she would follow up on the issue.

And lo behold, as promised, on the 12th day I received a message that the seller had refunded the amount and it would be credited back to my credit card account.

During this entire time, I learned a few important lessons about shopping online:

We also need to keep in mind that Flipkart, Amazon etc are marketplaces that facilitate transactions between sellers and buyers and that we are not buying from them. They however provide a lot of benefits, the most visible being the discounts and least visible being their constant efforts to ensure that the buyers, as well as sellers, are protected.

In my case for example, after escalation of the issue, they ensured that I got a refund from the seller without my having to go through the hassles of lodging an FIR and having to run to courts for a refund.

As I see it, the phone was stolen from the package when it was at a godown somewhere, due to inadequate security in place. The thieves were clever enough to place just the correct amount of soap inside so that the package would weigh the same as one with the phone. Hopefully, they will be caught and the seller will be able to recover the stolen goods.

So will I buy high-value items online again?

Well, I placed an order for the same phone again from Flipkart (this time at a price Rs. 2,000 less due to an offer!). But before placing the order, I checked if open box delivery was available (it was not) and changed the seller from the one I had bought from previously to another seller who had a slightly higher rating. Also, when taking delivery of the phone the next day, I got my son to video the entire delivery process as well as the unboxing in front of the delivery executive.

And yes, I am happy to let you know that this time the package contained the phone I ordered, and in fact, a large part of this article was typed on it too.