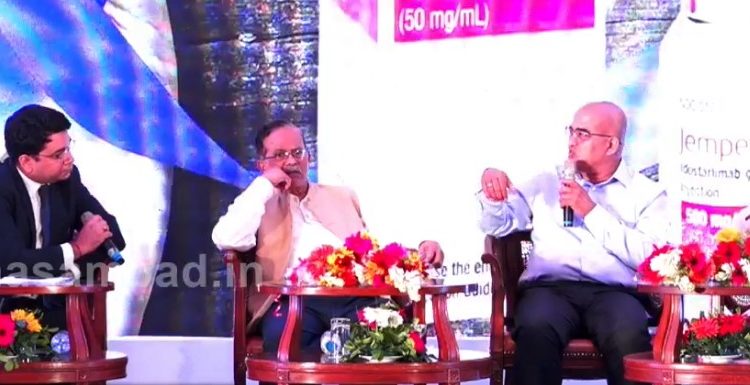 Bhubaneswar: Dostarlimab holds bright hope for treatment of cancer in future considering its success at preliminary trial stage now, according to medical experts.

Further elaborating, he said basically cancer is treated through surgery, radiation or chemotherapy. The latest additions to the treatment are tablet therapy and immuno therapy.

While tablet therapy kills the cells in a larger area of the body, immuno therapy concentrates in the limited area affected by cancer cells. Considering this Dostarlimab’s success holds hope, he added.

However, he said now the patients should not be hopeful of application of the drug which has been developed on the basis of discovery of immune therapy by Nobel laureate Dr James Alison of US and a Japan doctor.

“The drug is specifically meant for rectal cancer in early stage. It is also not meant for all rectal cancer patients. It has been effective in case of 12 patients with specific features out of 30 patients till now,” he said.

During the trial, the target patients were given injections 9 times in 6 months. After this, the tests found the wound in rectum cured. The experiment has been going on for 2 years with success for which the drug has been hyped, he added.

Dr Madhabananda Kar, head of department, surgical oncology, AIIMS-Bhubaneswar, said the drug is not for general treatment. Due to its limited success, the people should not stop other methods of treatment, he added.

“Treatment with the drug is going on for only 2 years which is a very short period for bringing it to general use. But it is a big hope that one cause of the cancer has been identified,” he said.

One encouraging aspect is that earlier, there was a blanket treatment for the cancer. It was time consuming and very expensive, while the patient lost patience. Now it has been confined to particular organ or cells which has its own advantages.

“Initially it succeeded in blocking one pathway for cancer cells which gave hope to the researchers. It was called gene therapy. But when it was applied, cancer cells moved in another pathway for which there was no treatment,” explained Dr Kar.

Dr Panda said there is no serious side effects of Dostarlimab like hairfall in case of chemo therapy. But grade I and II side effects like weakness, loose motion and cough which are also found in case of taking other medicines have been found in the patients.

Dr Kar said the new drug is very costly now. It costs more than Rs 66 lakh per dose. But gradually as research progresses and other factors intervene, it may become affordable like vaccine for cervical cancer which the government is planning to supply.

“It has been found that smaller doses of the drug are equally effective. Instead of giving 500 mg, if 100 mg works, the cost would come down. I think it is very encouraging and an important development. Besides, research is going on in India to produce low cost medicine with similar results,” said Dr SS Panda.

The panel discussion was moderated by journalist and anchor Balabhadra Rath.