The Harried Homemaker & Chaos Of Silence 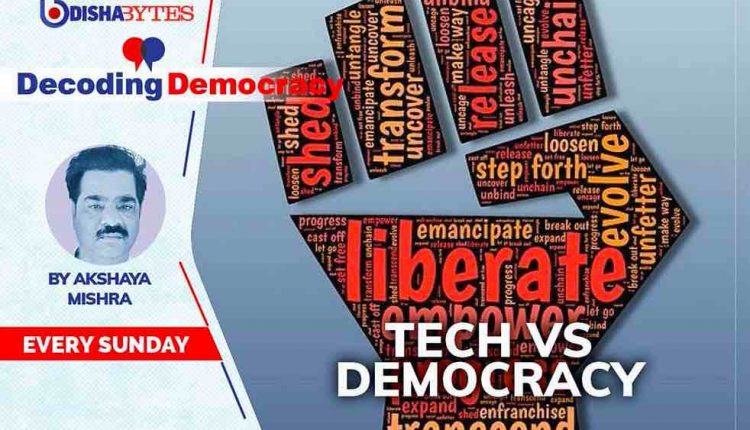 It’s well past 10 pm. Dinner is on the table and the aroma of delicious dishes wafts lazily in the air of this middle-class home. Mom yells, for the umpteen time, at the kids and the man of the family to finish the meal before it gets cold. When they troop in, eyes glued to mobile phones, the special food on the table generates no whoops of excitement in them. Dinner is finished in the thick silence, only with the tinkle of the crockery punctuating it now and then. Human voices are absent. All members are still busy on their phones, smiling and frowning at invisible characters somewhere else in the world. The presence of the ones sitting close is barely acknowledged.

Mom sighs. It was not like this a decade ago. Dinner time used to be full of laughter and happy banter. Each one among the four shared their highs and lows of the day. And food is what got the maximum attention. She no more knows whether one dish or the other makes any difference to them anymore. She curses mobile phones under her breath for ruining the family get-together time.

This could well be the story of any family. Mobile phones, the internet and cheap data service have disconnected us from our immediate surroundings. While we are connected to a wide world and more networked than ever before, it has come at a cost. Fundamental norms of human interaction have altered so much that people don’t appear the same they were three decades ago. We have more social media friends than real ones. We are more likely to respond to global events than developments in our neighbourhood. We are more attention-seeking and more self-obsessed. We are more combative and abrasive in our social conduct. We have sacrificed, to some degree, finer human emotions such as love, compassion and sympathy to prove our loyalty to we-groups, and the new identities we subscribe to.

In short, the Indian of the second decade of the 21st century is a new human being altogether. But he is just different, not necessarily an uglier version of his earlier self. The new human is shaped by ever-evolving technology and his responses to the world, in general, are guided by the opportunities and limitations technology creates. The latter has intruded into our private space, causing a reconfiguration of ties and bonds that existed earlier. The mom mentioned earlier used to turn into a storyteller when her baby refused to finish her food. The baby, now with a baby of her own, does not tell stories; she lets her kid play with a mobile phone when he gets fussy not only about food but also about pretty much everything else. Mom doesn’t approve of it, but that’s how technology has tip-toed into our lives.

Outside families its impact has been far greater, particularly in the way people interact with each other. They are more networked thanks to social media. It means they can reach out to a huge number of like-minded people; they can form groups to defend their views; they can launch orchestrated attacks on common targets; they can feel offended together; they can forge new identities or reinforce old ones, and they can be manipulated and mobilised on a far bigger scale than ever. This way technology has provided visibility and amplitude to communities and groups so far marginalised or ignored. Also, it has ferreted out and made acceptable a personality type hitherto surviving more like an aberration than a rule. This personality is likely to be in a real or manufactured rage all the time, abusive, irreverent, emotion-driven, illogical and with a strong victim complex. It would seek confidence in numbers and seek a muscular solution to all complex problems. Social media networks, where anonymity is assured, are a natural habitat for it.

Jamie Bartlett, the author of People Vs Tech, chooses the term re-tribalisation to explain the trend while discussing how technology, particularly communication technology, has transformed politics and proved to be a disrupting influence on democracies across the world. He writes: ‘Information overload and connectivity have encouraged a divisive form of emotional tribal politics, in which loyalty to the group and anger outrank reason and compromise… Over the last few years, the nature of political disagreement has changed. It has gone tribal. It is becoming hyper-partisan, characterised by fierce group loyalty that sometimes approaches leader worship…’ He says despite its inherent divisiveness and the occasional flashpoint of fury, democratic politics after the Second World War, by and large, was marked by remarkable civility and shared assumptions.

Civility, as we notice in India, has become redundant in our political discourse and shared assumptions have been replaced by conflicting assumptions. Perhaps it is normal. Throughout history, new communication technology and more information to people have always resulted in massive social and political convulsions. Invention of the printing press in the mid-15th century and television in the 20th century are examples. However, internet-driven communication technology is far deeper in its impact. It not only connects people across geographies and histories but also does it at incredible speed. Misinformation and lies can travel much faster than earlier and there’s just too much information than the human brain can process and digest in a logical way. The normal human response in such a situation is to be selective and align information with existing personal biases. It becomes easier to make a choice when there are too many others subscribing to similar biases. Tribes of like-minded people form.

There is always a huge chasm of time between technological-behavioural shifts and the pace at which the wider society adapts and accommodates them. It takes far longer to form new norms of human interaction and patterns of predictability in social behaviour to develop than it takes for technology to impact lives at the level of the individual. At present, technology is evolving just too fast for the wider society to cope. The result: the new human is already there but it is yet to find the moral compass or a set of values to be comfortable with others with a differing worldview. He is more confused, this more likely to view others with suspicion. When a large number of Indians consider a large number of Indians anti-national or Hindus consider other Hindus as anti-Hindus, it is not necessarily malice or ignorance at work, it reflects the confusion within. Technology can only provide information, loads of it; the way one processes it depends a lot on values and moral principles internalised. Those have started crumbling.

It’s possible that the idea of democracy we are used to belongs to another time, driven by the social, political, economic and other dynamics of a different nature. Its resources are inadequate to cope with the challenges posed by forces, attitudes and people unleashed by technology. It was never prepared for anarchists, nonconformists, disbelievers and malcontents of every description having a free run, with questions deeply unsettling for the status quo mindset.

But it’s too premature to pen an obituary for democracy though. Technology has let loose elements that maybe causing discomfort, but for all its drawbacks, it could be deepening democracy and assisting it in course correction too. Many of the outragers are people alienated from the democratic process for long. Forever on the margins, ignored or deliberately neglected, they now have a voice and power in numbers. They want to reclaim their space in the democracy. They are angry because the privileged won’t yield and make the room easily. The latter would defend the ideas, notions and institutions they believe in fiercely.

The new Indian, they would lament, argues too much, is too offensive and fundamentally destructive. The truth is they could be accused of the same too; it is only a matter of perspective. Whatever the reality, the fact remains that technology has proved to be a great enabler. It has empowered fringe people, set new debates in motion and broken the monotony of old ideas. Democracies have been through such phases earlier too, and have survived. All stakeholders in them will soon find ways to co-opt technology and make it a partner in self-revision and re-orientation.

At some point, it is obvious that the fight of the new Indian is not against the idea of democracy itself, but for space within it.

Coming back to the mom, she is still confused by the silence at home. She misses the small joys that everyday life offers. She misses the non-stop chatter of children, their demand for a birthday cake or an in-house party with friends, the fun of watching a movie together, the man of the family grumbling about their exam results and just the warm comfort of being together. Yanking them away from mobiles and laptops doesn’t work; she has done it a thousand times and has given up now. She feels lonely, and to her surprise, she has started relying on the mobile phone to fight it off.

By now, she has developed strong likes and dislikes. She comments on issues that should not concern her a bit as a homemaker. She gets angry at posts and views of her close friends and is quick to make trenchant remarks. She is discovering friends in strangers and letting go of old ones she held dear earlier. Without even realising it, she has created enemies and joined battling camps. She is evolving into a new person.

That’s what technology does to us!!

World Environment Day: Are You Planning To Cycle Today Too?