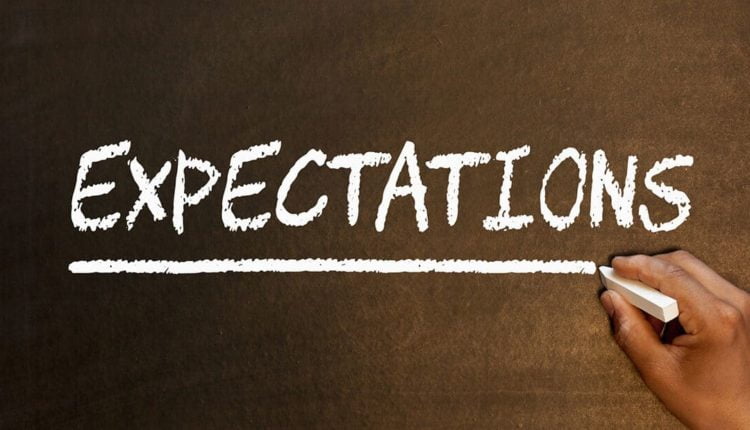 A recent conversation with a young cousin made me think about the effect that expectations of people around us has on our life.

My cousin has secured 90 per cent plus and a good university placement, but he isn’t keen on pursuing his studies in the new online format now and would rather take a gap year. However, he was worried about not living up to his parents’ expectations and felt he didn’t have a choice to take a year’s break without causing them disappointment. I felt sad hearing him for basing his decision solely on others’ expectations.

We learn to manage expectations between ourselves and those of others early on in life, even as a child and hone the skill over the years. Those who successfully manage to navigate it, learn to reduce disappointment and increase their happiness. Unfortunately, a vast majority of us struggle with it.

It’s well-researched that our opinions and behaviour are greatly impacted by our own and others’ expectations of us. This is called the expectation effect and can be categorized into a few types.

A positive expectation from others leads to performance improvements and is widely acknowledged. An example could be the high expectations of a manager leads to higher productivity from his subordinate or even his whole team. Another example is the academic performance of students increases due to their teachers and parents having high expectations from them. When expectation is conveyed positively, students work hard to achieve it. This is called the Pygmalion effect – named after a sculptor in Greek mythology who fell in love with a statue of his own making. Aphrodite, the goddess of love, then turned it into a real-life being.

The opposite, called the Golem effect, happens when low expectations, say from managers, teachers or parents lead us to indulge in self-harming behaviour further leading to failure, as expected of us. A doctor’s pessimistic diagnosis and behaviour can lead to severe consequences for his patients. This is probably the reason why doctors are generally optimistic and some faith healers even resort to placebos, to keep up the spirit of a person.

The other prominent effect seen in our day to day life, is the Halo effect. It basically means the positive impression that a person, brand or company makes in one area influences us in expecting a positive effect in other areas too. For example, employers rate the performance of some employees more highly than others based on their overall positive impression of them, and may be biased due to being well groomed or well-spoken rather than actual performance. The term “Halo” has in fact been used as an analogy to the halo drawn around saints in paintings, to create a lofty impression on people and bias their judgment.

Advertising firms use this to their advantage when they use the “halo” of movie stars, sports persons and other high achievers in one area to associate them with a brand and increase sales. We do not pause to think whether the star asking us to buy a car brand actually knows about it or should we rather listen to our local mechanic who services the cars regularly. In fact, the automobile industry regularly uses limited edition top end luxury models called “Halo cars”, like an Audi R8, to draw in people to buy low end models.

However, expectations are not always synonymous with positive things. Think of a salesman being able to sell more by taking advantage of our bias towards him for being handsome or well dressed. Would you rather prefer to be treated by a good doctor or a handsome one?

The reverse called the Horn or devil effect happens when a person’s negative characteristic in one area creates bias in other areas too. How many times have we judged a person’s ability to perform based on looks or other unrelated characteristics?

The key may be to find a balance between reasonable and unreasonable expectations. To expect an artistically gifted but mathematically average student to get into an IIT is setting him up for failure. Won’t it be better to have a conversation, consider his preference, find a reasonable target and then set expectations for the student, so he can aspire for and achieve it? Unrealistic or rigid expectations can lead to a sense of failure, depression and in some cases suicide. The world is full of opportunities and a few lost ones don’t define the rest of our life.

Expectations are premeditated resentments too. We expect people to behave in a certain way but when they don’t, we end up resenting them. It may be due to a mismatched or unspoken expectation. You may expect a person to be nice to you but if they just do their job efficiently, should that not be enough? When we expect things from others, without their consent, it is unrealistic and can lead to disappointment and resentment. Maybe next time we should agree with our better half about who will make tea and when, rather than expecting a cup and cribbing when not getting it.

Buddha was said to have asked us to harness the power of positive thinking through his teaching of ‘what you have become is what you have thought’.  Positive thoughts lead to positive outcomes and other religions allude to it in various forms. The belief is also sometimes called the Law of attraction, defined as being able to attract things into your life through the power of positive thoughts. While movies have popularised this concept, we do need to appreciate that our expectations have to be realistic positive thoughts with a follow up plan to achieve it, rather than random wishes.

If we temper our expectations with a measure of reasonable and optimistic outlook, we will be able to welcome happiness into our lives. We will be grateful to God for what we receive and avoid disappointments.