The Heart-Touching Story Of An Abandoned Calf — A Bull In The Making! 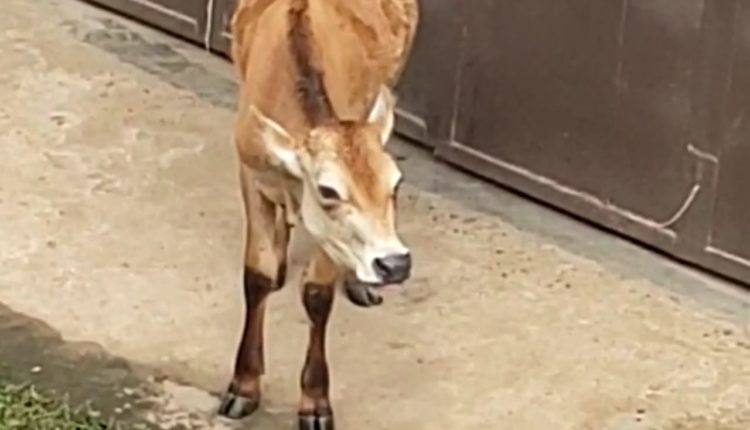 I woke up very early on Sunday morning hearing the heart-touching scream of a small calf in the lane adjacent to my house in Bhubaneswar. It was a piercing cry, almost like the wailing of a human toddler! I was disturbed, but was not able to comprehend fully the context of the tragic call from the heart by the baby calf.

After going through my morning chores while the wailing outside grew in intensity and frequency, I walked to the balcony and saw a little brown calf standing near the gates of an apartment opposite our house and wailing in a sorrowful face with lifted nostrils — almost like a loud prayer aimed at the skies! It was clear that the calf was bellowing for its mother.

The calf is separated from its mother, my wife said. Or may be, it has been abandoned by its owners! May be they have lost interest in the calf as it is a male one and has passed the stage when it was useful in milking its mother. As soon as the milk stops flowing, the unscrupulous owners abandon the male cow in a different locality so that it cannot retrace its way back!

That is criminal and unethical, I protested.

Of the two senior citizens, my wife is more worldly-wise!

I looked closely at the wailing calf. Yes, it was a male calf. My wife’s hypothesis was right. Obviously this is another case of use and throw of a living being. Some ungrateful humans even abandon their own parents after they become old and senile. Some old Alzheimer patients have been deserted deliberately by their children. What a tragedy!

I was shuddering at this cruel act of treachery by human owners of the calf.

What my wife told me next with the confidence of a forensic researcher, literally blew my brain off. This most likely is a case of a Hindu owner who has a cowshed with a few cows, she said. He won’t spend on feeding a male calf as its mother has stopped producing milk. He can’t afford to feed till the calf becomes a bullock ready for sale to farmers. He can’t also sell the calf to a butcher as that would be sin for a Hindu!

Look at the irony! The owner has collected milk for months from the calf’s mother cow. So much so that the emaciated calf indicates how it hasn’t been fed half of what it deserved.

As I tried to grasp the truth as it dawned on me, I was getting sad and teary even as the calf was proclaiming its deserted status to the Gods in high heavens, through its heart-rending wails every minute!

The world remained unaffected as normal road traffic went past by the crying baby animal. I was sad and angry, helpless as well, as I tried to figure out how I could help the little cow.

My wife gave me my morning cup sans sugar, along with worldly gyan that this hapless calf is puzzled at the moment and can’t find its familiar moorings in a strange location. But in a day or so, it will forget its tragedy and try to save its life by whatever food or fodder that comes its way from kind residents or by foraging at the colony dustbin and roadside green patches. Water will be managed from rain puddles and open drains etc. It will start moving around eternally in search of food and water. It will be on its way to transform into a sacred bull! Then it will know how to get food or even beg food from homes, roadside eateries and vegetable shops. In a Hindu society, the bull gets fed somehow or the other. See God’s ways!

I ventured out to give some green leaves to the crying calf. My wife said I can take the bunch of green leaves meant for our lunch item today. I was happy that I could give it something. I took the green bunch and spread it on a newspaper on the ground.

The calf approached it very reluctantly and, as I was spreading the greens, took an experimental bite and licked my left palm a little. I was shuddering. as it meant to tell me that please take me to my mom! I looked at the calf’s eyes. They were wet.

The calf did not munch the greens beyond the first exploratory bite. It looked hungry but it was missing mom very intensely. He was elongating each of his wails till its breath would not support any more. I felt so bad that my green bunch is no substitute for his mother. Truly, missing his mother had puzzled and disoriented the abandoned calf.

The calf tried to rush through the iron gates of the apartment, only to dash badly against the steel sheets. Them it would nozzle the holy Kumbh with green coconut placed on top. The earthen pot tumbles. The water spills out. The calf tries its tongue on it and lifts itself away. He rushes to the Kumbh with green coconut on the other side. It smells the mango leaves on the earthen pot. But soon walks into the middle of the road. It was a hot sunny day.

The bikers and walkers would skirt around the crying calf without even a cursory glance. A kind flay owner brings some bread slices. The calf would not look at it. I retreated to our Covid shelter residence not knowing how to help the skinny calf.

Then I started googling for animal helplines. Most of the phone numbers were wrong numbers or defunct. People For Animals was uncontactable. The Municipal Corporation helpline was not helpful as the man at the other end said they have no activity for abandoned animals. He could of course help if there was a dead animal. He could help if it was a rabid dog. But no one seemed interested in the wailing small calf.

Yes there would be a group too willing to take the calf to the butchers. But they won’t do this in broad daylight. I was apprehensive that after nightfall, that possibility might materialise.

I was told to contact the veterinary college for help. But their contact numbers in Just Dial were pretty ancient to be of any help. I thought of telling police control room. But my gut feeling was they may not care at all and instead brand me a nuisance! Despite a good samaritan image in corona times, people like me wouldn’t get anywhere near the khaki brigade. Being myself a former IPS officer of Karnataka cadre, who left it as soon as posted, was not very comforting for me.

Meanwhile, there was a heavy downpour of monsoon rain. I went for a bath as lunch got ready. I was sad at heart that I could do nothing for the calf yet. I learnt that some flat owners had fed it cooked rice and roti. So I rushed through my bath and had lunch. Honestly, I did not feel hungry. I could not take the curd as the calf continued its wailing. I felt like an offender who had stolen milk from the calf!

After lunch, I tried to contact many friends, but nobody responded. One kind-hearted man advised me to contact a Gaushala for help. I contacted them, but they refused. They would receive the calf only from its legal owner. There ended all hopes.

Evening was approaching. I felt as if I was helplessly watching a calf’s life being dragged towards a butcher! I did cry a bit, not knowing what to do.

After a restless evening, I found the wailing had stopped. I thought may be the owner had come and taken away the calf. I slept with relief. But next morning, at 7 am sharp, the same wailing cry was back. I came outside to see the calf standing opposite our house and crying out at regular intervals. I was aggrieved once again. My wife, too, was sad but counselled me that the calf would soon become a bull and be counted as sacred and powerful.

I was feeling like wailing myself. Oh Lord, why do you make sacred and powerful bulls at all from such abandoned wailing male?

As if on queue, the calf produced a mighty wail this time, not for seeking his mother but in a thundering protest against this standard operating procedure of making a sacred and powerful bull from a weeping and wailing abandoned poor calf!

As I close this report, the calf’s cries have gone hoarse but not lost its pathos after 18 hours of powerful continuous wailing. God is deaf, dumb and mute – my heart was crying!

They Called Each Other Brother: Sooraj Pancholi’s Mother On Rumours Linking Him With Sushant Singh Rajput’s Death