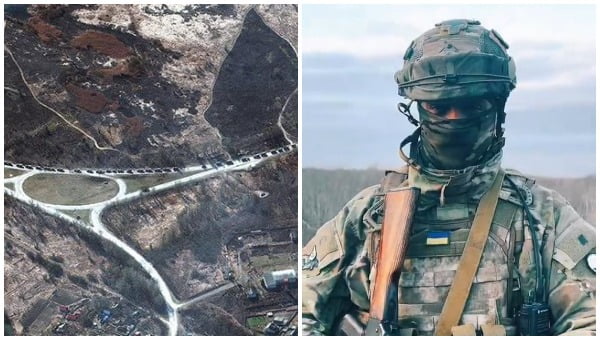 Bhubaneswar: “Once upon a time, four sons were born to Jewish Ukrainian parents. Three sons were murdered by the Nazis. One son survived. The survivor’s grandson is now an international hero fearlessly confronting his country’s invaders.”

#Ukraine is the ruling hashtag on social media due to this man, Volodymyr Zelenskyy, who is not only defending his country by staying put in Kyiv but also waging an online war against Russia, which is currently heading towards the country’s capital with tanks, stretching 60 km, and the other military techs after talks at Belarus remained inconclusive the previous day.

Everybody is a soldier in Ukraine now. pic.twitter.com/OWdEZ3vcXd

.. She was painfully angrily telling Russian soldier to go home to their country and leave them alone in Ukraine 🇺🇦
We hope Putin sees and feel this. Putin subject soldiers to war against their will.
End war in Ukraine now!!#Ukraine pic.twitter.com/LbMeNTM1r6

While reports have blamed bad planning, fierce resistance and lack of domestic support for Russia’s slow advance into Kyiv, it is also failing the narrative war in Ukraine, which is dominating the timeline of all social media platforms. Stories of resistance by the public, humiliating memes against Russia and jokes on Vladamir Putin are flooding Twitter and Facebook. Clearly, Russia’s propaganda machinery has failed and this can be attributed to the fact that most social media platforms are owned by America. They have systematically removed Russian propaganda.

Hey Putin this is from the Grandmothers of Ukraine pic.twitter.com/cCjoN27G4w

Ukraine soldiers captured Russian army near Kharkiv. One like for the encouragement of Ukraine soliders. #Russia #Ukraine #RussiaUkraine pic.twitter.com/a56mJuK3U1

This is not all. When Kharkiv saw significant disruption with connectivity to Ukraine’s main internet provider, GigaTrans, dropping below 20% of normal levels due to heavy fighting in the city on Friday, Elon Musk, responded quickly to calls for his satellite broadband service, Starlink, to be made active in the country.

Speeds reached over 200 megabits per second. SpaceX CEO @elonmusk provided Ukraine with the system to make sure that Russian forces aren’t able to take down Ukraine’s internet connectivity.

On Monday, Twitter said that it would take steps to reduce the circulation of tweets that link to content from state-affiliated Russian media accounts on its platform.

Google has paused Russia’s ability to make a profit from content across its services. YouTube has also blocked state-sponsored ads from Russian channels on its platform and blocked Russian channels in Ukraine, at the request of the Ukrainian government.

Check other tweets and memes doing the rounds on social media on Tuesday:

Russia’s losses as of March 1, according to Ukraine’s Defense Ministry. pic.twitter.com/Z0V7C4FiZt

Ukraine is offering amnesty and $50,000 to any Russian soldiers who surrender pic.twitter.com/nYvf0IqUFp

Support for Ukrainians from all over the world 🇺🇦 At a rally in Denmark, people knelt to pay tribute to the fallen defenders of Ukraine. pic.twitter.com/bq17Bu3GXq

Another Russian military truck hit by a Molotov cocktail#Russia #Ukraine

Why India Needs To Worry About Russian Weaponry?