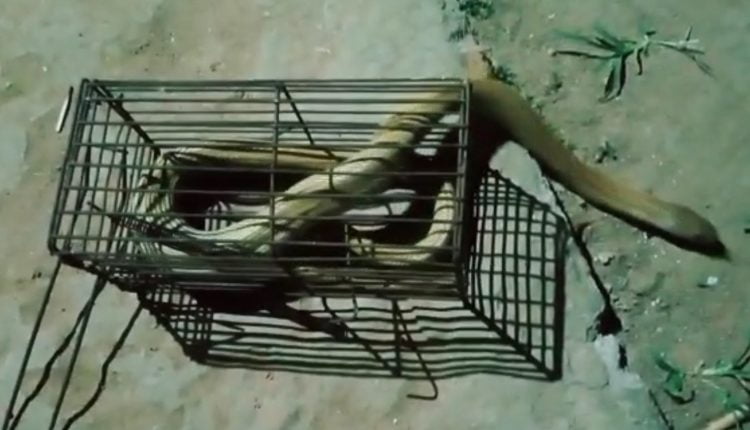 Puri: A cobra that had entered a mouse trap got itself trapped in the wire mess after consuming the rodent in the district on Tuesday night.

Dipak Jena of Sripatipur village under Delanga block had set up the trap to catch the mouse in his house. A huge mouse got trapped in the mess after coming inside in lure of food on Tuesday. But he did not kill the mouse and left it unharmed in the trap.

In the evening, he found that a snake had managed to crawl into the mouse trap and had the rodent as his meal. But the problem started there for the cobra. As its belly had swollen with the mouse inside the stomach, it could not come out though the iron mesh and got stuck.

On finding the snake inside the trap, Dipak’s family got terrified and called Snake Helpline. Susant Kumar Behera, a member of Snake Helpline, reached their house and took the rodent trap outside carefully.

Sensing danger, the cobra regurgitated the muse it had swallowed. As it slid through the iron mesh of the trap, Susant caught hold of it. He identified it as a Spectaled Cobra that measured 3.5 feet in length.

He put the cobra inside his bag and took it to release outside the village in a suitable natural habitat.

In his reaction to the incident, Subhendu Mallik, general secretary of Snake Helpline said, “We have earlier rescued cobras in similar situations. Therefore, we suggest the manufacturers of rodent traps to use smaller meshed materials to prevent such situations.”