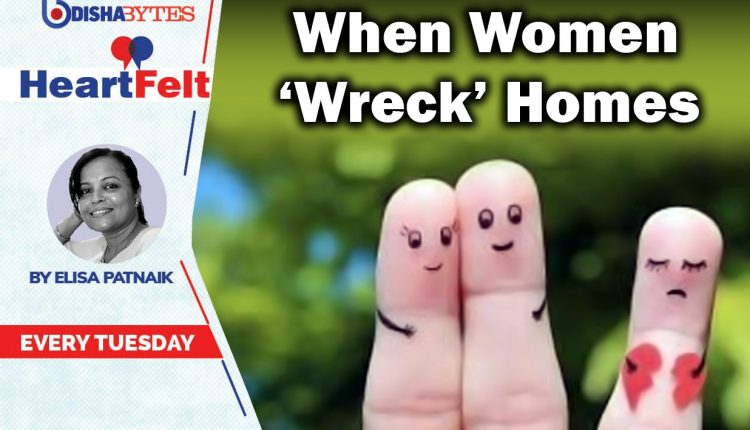 Do only women have the special knack and skill of ‘breaking’ and ‘wrecking’ homes? Or for that matter to be mistresses? It definitely seems so. These expressions seem to be exclusively reserved for the female species. It’s always the woman who is given the label of ‘home breaker,’ for disrupting the peaceful and happy marital life of her married lover. But alas, men are never subjected to such harsh judgements.

Likewise, a mistress is described as a woman other than the man’s wife having a sexual relationship with the married man. There is no equivalent terminology for a man who has a sexual relationship with a married woman other than her husband. In the whole scheme of extra-marital relationships, the role of the man concerned has always been ambivalent and ambiguous. It’s as if he is an invisible entity, a vulnerable character or an innocent person who was simply led or compelled into the situation. The heartaches, skirmishes, accusations and ugly battles are mostly experienced and exchanged by the two female protagonists – the wife and the ‘other woman.’

‘Homewrecker’ is most often used to describe a woman, who is responsible for the break-up of an otherwise happy domestic setting when she has a relationship with the husband/partner of another woman. Married men are never home breakers (their own and others) when they choose to have extra-marital relationships with another woman. Or are accused of being one, even when they are single and have a relationship with a married woman. Here too, the woman is the prime culprit, the immoral one.

By now, all of us are familiar with the recent disturbing and voyeuristic videos of the so-called extramarital affair of an Odia film star and his family. The wife assaulting the ‘other woman,’ accusing her of ‘breaking her home,’ with passers-by recording the entire incident on their mobile phones rather than putting a stop to the drama or the assault. Two women engaged in high drama on the streets for a man is salacious stuff indeed. The more the hair pulling, shoving and slapping, the merrier it was.

People in general, television viewers and social media users didn’t lose a moment to declare their verdict – eulogising the ‘loyal, good-hearted and wronged’ wife and slandering the ‘bold, ambitious and shameless temptress of a husband snatcher.’ No one spoke about the role of the man in the entire episode. Only that ‘he had strayed, he was being controlled and not in his right senses to take correct decisions.’

What’s more, there ensued a series of videos and interviews (duly recorded by media and digital channels and spread through social media) of random people who spewed venom on the ‘other woman’ replete with name calling and innuendos and justifying the violence. Given an opportunity, we Indians love expressing our superior, moralistic opinions publicly and doling out character certificates, especially when it involves ‘fallen’ and ‘characterless’ women. Doesn’t matter if we are not connected to the issue or the incident or even maybe indulging in similar unscrupulous and amoral actions. It becomes anybody and everybody’s business to comment, judge and give a verdict.

Here, I am not discussing the veracity of the case but solely the perception, reaction of people and the ready acceptance that it’s only women who break homes. I was shocked to see random reels and comments on the issue which to me was a private matter between three adults. Even shocking was the manner in which the ‘other woman’ in question was ruthlessly and scandalously torn apart for ‘captivating the guy and keeping him away from his family.’ The typical template of an adulteress and a temptress.

This perception also extends to situations when a man and a woman break up or get separated and the man gets involved with another woman. In this case too, it is the fault of the ‘other woman’ who is labelled as the ‘home breaker.’ It’s a different matter that a lot of couples separate because their relationship is dying or they want to move on with someone else.

Woman shaming is common but certainly not man shaming. We don’t blame a man when he gets involved with a woman who is married or in a relationship. He is certainly not the home breaker or the philanderer indulging in infidelity. Yes, women do enter into relationships with married men and we all know infidelity hurts and causes heartbreaks. But why don’t we consider it a private affair between adults?

Why can’t we perceive a divorce or a separation as what it is — two people who aren’t happy with each other deciding to part ways? Or question the role of the man involved? Why put the blame squarely on the shoulders of another woman?
Such examples are rife, especially in showbiz where women actresses and performers are always accused of stealing other men and dubbed as ‘homewreckers.’ Why is it that we need a woman to blame, a vamp to justify the extramarital relationship or the separation? As outsiders, who are we to be judgemental and who’s to blame for what happens?

What’s preposterous is the way men are positioned as helpless and hapless fools in almost every incident, who apparently fall prey to scheming and cavalier women. Men are never the cheating partners. It’s only women who steal other’s men.

Such notions not only fuel the false argument that a woman is a woman’s worst enemy but also the idea that men simply can’t help themselves. Ironically, the wronged or the aggrieved woman tends to vent all her anger and pain on the ‘other women,’ absolving her husband/partner of all responsibilities. When it comes to a philandering and cheating husband, the wife/partner’s anger and frustration are directed more at the “homewrecker” than at the husband who betrayed the commitment in the first place. Rather than holding their male partners accountable, they go all out for the ‘other women.’

In fact, a US-based website allows the ‘wronged’ wife or girlfriend to expose the ‘other woman’ in her relationship for the world to judge. ‘She’s A Homewrecker’ is an online forum where ‘wronged’ wives and girlfriends post photos, and lurid details of women they say cheated with their men. After all, the aggrieved wife is the victim, the man the prey and the ‘other woman’ the predator.

It is also assumed that men will be men with a propensity to stray once in a while and also that men can’t control their sexual urges and have to do what’s ‘natural.’ It’s as if the ‘other women’ or the ‘homewreckers’ are on the prowl, capturing hapless males through their feminine wiles.

For men, this is definitely a convenient ruse. As always, women are expected to uphold higher standards and morals as compared to their male counterparts. This is rooted in patriarchy, perpetuating myths about men and women, and letting men off the hook. But the perception of the ‘other woman’ as femme fatale is premised on the dangerous assumption that women are responsible for men’s sexual behaviour. Many times, this is also used to justify men’s sexual violence and has been criticised and rejected by feminists. The ‘other women’ are typically subjected to intense public scrutiny and judged under a harsh spotlight. Interestingly, when a wife cheats on her husband, it is no different.

She quickly turns from a faithful wife to a villainess with the spotlight severely trained on her. What’s also outrageous and outrageous is the conservatism and sexism displayed by most of the media outlets. The stereotype of the ‘other woman’ as ‘homewrecker’ and the instigator of the adulterous relationship is reinforced again and again through visuals, bytes and analysis.

They continue to harbour and perpetuate the traditional marriage where the wife, fulfilling her domestic and maternal duties, continues to stand by her man and is even willing to forgive him for having gone astray. Honestly, people (both men and women) don’t really steal people or wreck homes. People make choices. Men aren’t helpless when faced with temptation, they’re adults who decide how to conduct themselves.

Men, like all other adults, have a choice and they choose to do whatever they do. They always have the option of saying no if they want to, no matter what the temptation. It’s after all his home a cheating husband is choosing to destroy and his wife/partner he is deciding to betray by entering into another relationship. And in this case, the person who chooses to break this commitment is the home wrecker, not the ‘other woman.’