Why We Need Equity More Than Equality 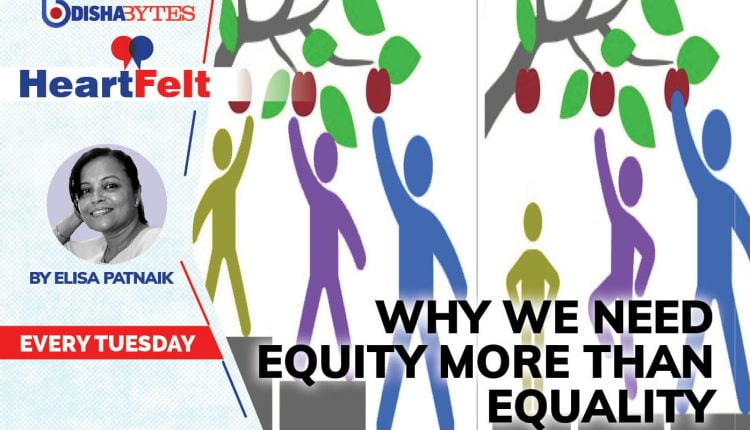 The other day, my husband showed me a social media post with a photograph of a post office with two separate queues for male and female with the former much longer and with a comment –“In this age of equality, till how long should we have separate queues for men and women.” My husband wanted to know my opinion on the post and I was surprised that even an educated, progressive, and liberal person like him could not really figure out the reason for special privileges being provided to certain sections.

I responded to my husband by saying do men get molested while standing in queues, their breasts touched or their bottoms pinched? Do they have pregnant stomachs trying to manoeuvre for space while paying bills? My flabbergasted husband replied, “seriously, I never thought about this.”

I am often bombarded with comments, remarks and questions from friends and acquaintances that if we are striving for an equal world for all, then why are we conferring special privileges to some. From reserved seats in public transport for women, separate facilities, and services for women to reservation for Schedule Caste (SC) and Scheduled Tribe (ST) and OBC candidates in educational institutes and jobs etc.

Many of us get perturbed and feel it’s unwarranted in an ‘equal’ world where everybody should have ‘equal’ opportunities. But is at an equal world, really? Are all sections, communities, genders equally placed to access resources and opportunities and benefit from them? If it’s an equal world then why are millions of people poor, homeless, unemployed, illiterate, malnourished, hungry? Or why do more people from particular strata die due to hunger or lack of medical care and treatment? Why is violence against women so widespread? And why are millions of girls still uneducated?

Honestly, I used to roll up my eyes internally at these observations and remarks especially coming from the seemingly well-informed, modern, and open-minded folks. But I have now started realising how prevalent and pervasive this mindset is where we do not want to give extra privileges to the less-privileged.  And also, how important it is to understand the difference between ‘Equality’ and ‘Equity’ and better still, practice in our lives and communities to achieve a truly developed, empathetic and equitable world.

While ‘Equality’ and ‘Equity’ may sound similar, its implementation under each can lead to considerably different outcomes. While ‘Equality’ means every individual, group or community is given the same resources or opportunities, ‘Equity’ recognizes that each person has different circumstances and accordingly allocates the resources and opportunities needed to reach an equal outcome for both. For example, when we have equal representation for both men and women in a democratically contested election, a woman, transgender, or a Dalit candidate may not have the same means, resources, or opportunity as say a mainstream middle-class general male candidate. Many women and Dalits may not even be able to join the race in the first place. Political reservation for such groups takes into account the historical inequity and enables them take part in a political process hitherto denied to them.

It is critical to understand the difference between equality and equity to ensure that resources, services, and opportunities are directed appropriately as well as vulnerable people are supported and enabled to reach there.

People have unequal access to social, economic, and cultural systems and structures. We know that women and other marginalised groups were denied education, decision-making, power, and participation in the mainstream society and were continued to be oppressed in many ways. An equitable approach allocates the resources that each person need to access resources and opportunities leading to positive outcomes for all.

Equity cannot be achieved by treating all members of the society equally but equitably. Because not everyone is equal. So, when we provide free or subsidised services to the low-income and marginalised groups in public health, education, food  housing, sanitation programmes etc., as a society and government we acknowledge that different individuals and sections of the society have differing opportunities, access to resources and abilities to deal with situations and crisis.

Reservation or quotas in education for people belonging to SC, ST and the OBC considers this historical deprivation, oppression, and social and cultural isolation and intends to correct the historically established social and educational marginalisation. It is believed to be an affirmative action to ensure that conventionally marginalized and discriminated communities are given opportunities in education, employment, and politics so that they rise above their deprivation.

Gender Equality verses Equity is another contested subject where people (both men and women) contend that since we are promoting equality for both women men, the former should not be conferred with any special or exclusive rights and privileges. What they fail to see is that historically women have been already pushed several steps behind by patriarchy. In order to reach the same level as the men, women need to be enabled to travel those few steps ahead. And for this, they need to be supported with affirmative measures.

Moreover, it’s equally important to recognise the difference between men and women, the prevalent social and gender norms, and its impact on their lives to fully comprehend each other’s challenges. Most of the women become pregnant, bear children, are burdened with child rearing and domestic responsibilities, and hence are unable to fully participate or contribute.

Gender equality envisages enjoyment of equal rights, opportunities, resources and rewards by both men and women. In case of gender inequality, it is usually women who are excluded from decision-making and fail to access economic, social, and other resources. So, to promote gender equality, empowerment of women focussing on identifying and redressing structural imbalances will not only support women but also enable them to have more agency and decision-making power to manage their own lives.

Therefore, gender equity is the process to ensure fairness through special strategies and measures to balance for women’s historical, cultural, and social disadvantages that prevents women from participating on a level playing field. When women join the armed forces in combat roles for example, we are giving them equal opportunities but at the same time making the forces gender-friendly and gender-equitable would entail recognising the challenges and facilitating their participation.

Equity always leads to equality. Achieving equality requires empowerment of the disadvantaged groups to ensure that decision-making at all levels, access to resources are no longer in favour of the advantaged and mainstream sections and all citizens participate as equal partners.

So, while equality is focused on every individual with the same equal opportunities, gender equity works goes further to correct the historical wrongs that have left individuals and communities backward. Equity also means enabling and empowering the vulnerable groups to come forward so that they are at an equal footing with others and also changing culture and society to be more supportive of them.

However, everyone need to understand the difference between equity and equality for the societal and cultural shift to happen and also to provide the extra support to such people and communities.

The Covid pandemic made many men realise and discover what it was like to spend so much of their time managing work, childcare, family, and household responsibilities which was usually managed by women. More and more men sharing domestic duties could definitely create an equitable environment both at home and at work.

So, it starts with each of us in our homes, families, and communities. By adopting an equitable stance, recognizing, and breaking down conventional and persistent obstacles that prevent opportunities from becoming a reality for many.

[Watch] Couple Gets Stuck In Waterfall During Pre Wedding Shoot