Why Women Get ‘Hysterical’ 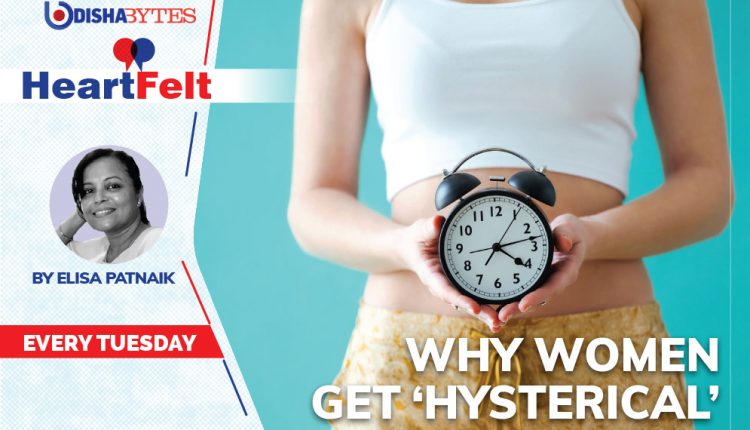 I came across an article recently where a middle-aged woman in the UK struggling with low moods, insomnia, night sweats, brain fog and terrible anxiety shares how she ended up feeling mad at times. It ended her long marriage and then she discovered that she has been menopausal. Consultations with her doctor revealed that this was likely a side-effect of perimenopause – a period leading to menopause during which the hormone levels change. The article quoted a survey where 40 per cent of menopausal women said they had no idea of the mental-health impact.

This set me wondering about the situation in India. Forget about seeking a divorce, the condition is not even talked about in families and the society in general. Though I had heard middle-aged women discussing about the physical aspects of menopause in hush-hush tones, rarely did they discuss about its emotional and mental health impact. “Why are you constantly hysterical,” was how a well-educated gentleman in my family frequently chided his wife prone to frequent emotional outbursts due to hormonal imbalance. Lately, a few close women friends going through this phase have shared how they go through phases of murderous rage and extreme impatience during this time.

It’s not just menopause, women’s life stages are ruled by the multiple stages of hormonal changes based on reproductive cycle, beginning with menstruation, pregnancy and child birth, perimenopause and menopause. And all of these involve a series of hormonally induced changes in girl’s and women’s bodies and brains affecting their physical, mental and emotional well-being. Hormonal changes have also been linked to both emotional and violent outbursts, depression, temperamental behaviours and massive mood swings.

But, the severity of such conditions are typically labelled as ‘women’s problems’ or dismissed as unfounded hysteria and perceived as a ‘natural’ and ‘normal’ occurrence rarely forming a part of the mainstream women’s health narrative. Moreover, while the physical symptoms are sometimes managed with consultations and medication, the psycho-social impact of hormonal changes on women is neither articulated candidly nor well-researched to deserve any importance.

The impact of hormonal changes for females is felt as early as 11 years with start of menstruation with girls and women experiencing Pre-Menstrual Syndrome (PMS) every month before their periods for the next couple of decades. It includes mood swings, fatigue, irritability, depression besides the other physical discomforts and pain adversely affecting the quality of life, relationships, productivity and social activities. According to a recent article published in the International Journal of Community Medicine and Public Health, women experience an estimated amount of severe PMS symptoms for 3000 days during their reproductive years. But girls and women lack or have little knowledge on PMS and its management.

Besides PMS, there are other conditions linked to menstrual cycle caused by hormonal imbalance during this time. Women suffering from Premenstrual Dysphoric Disorder (PMDD) go through enormous anxiety, social withdrawal, fatigue, erratic behaviours and breakdowns.

Endometriosis is another condition related to the menstrual cycle where the periods are accompanied by extreme physical pain. Despite the Endometriosis Society of India estimating that 25 million Indian women suffer from this condition, it is seldom spoken about and understood largely due to the taboos and stigma around menstruation. Polycystic ovary syndrome (PCOS) is another condition that causes infertility, obesity and excessive facial hair which often leads to mental health issues like anxiety, depression and eating disorders.

With pregnancy and child birth, the upheaval caused by hormones continue when women experience sudden and dramatic increases in hormone levels particularly estrogen and progesterone. They go through severe mood swings, irritability, anxiety and sadness besides the enormous physical changes that their bodies go through. Millions of women go through ‘pregnancy emotions’ every day and yet, it is something which is hardly discussed and hence the need for its management and counselling support system is scarcely available.

As women get older, they experience the most acute effect of hormonal changes during perimenopause followed by menopause. For most women, menopause does not happen overnight and the process starts gradually from the mid to late 40s. Perimenopause is the period before menopause when all the symptoms occur which last for several years. As the reproductive hormone levels changes, women experience unpredictable mood swings, depression and extreme and sudden feelings of panic, tension, anxiety or anger along with hot flashes and insomnia.

A recent article published in the International Journal of Applied Basic Medical Research on prevalence of menopausal symptoms and its effect on quality of life among rural middle-aged women (40–60 Years) in Haryana pointed out that majority of the women had anxiety (80%), followed by physical and mental exhaustion (71.5%), sleep problem (61.2%) and irritability (60.7%).

With women affected by other serious medical conditions in India, this issue though critical, is often overlooked, and is only addressed among a few elite sections privileged enough to recognise and seek expensive treatment like Hormone Replacement Therapy. Unfortunately, most of the girls and women in India feel uncomfortable speaking openly about the mental and emotional aspects of hormonal changes as its yet to be recognised and accepted as a health problem. The effects are mostly dismissed as natural and normal part of being female and women are told to accept and bear it. The stigma and shame associated with seeking help for mental health issues prevents many struggling women from reaching out.

I am sure, in most of the Indian families, parents, spouses, children and other close family members would not even be able to identify and acknowledge the issue and offer the much-needed support, and encourage women to seek professional help. Moreover, there is often a disbelief or an overlooking of women’s pain. Women are not listened to, counselled or given information so as to better manage their conditions and seek support. Rarely do menstruating, pregnant and menopausal women are counselled or supported on the debilitating effect of fluctuating hormones. And, hence, it’s not uncommon for women to hear that it’s normal to feel depressed or to get ridiculed for expressing the discomfort and misery of fluctuating hormones. A lack of awareness among girls and women on the conditions as well as dearth of sufficient medical evidence makes it difficult to establish as a widespread women’s health issue requiring attention.

Every adolescent girl and women needs be aware of the stages of these hormonal changes, its effect and how it can be managed. Awareness, counselling and health education programmes are a must along with creation of platforms where girls/women can openly share and discuss their concerns. Special clinics to address these problems will help to sensitize and increase awareness among both men, women and their families. Hormonal fluctuations and changes interacts with brain chemicals, affecting physical mental and emotional health further impacting personal, professional and social relationships, productivity and overall well-being. It’s only recently that girls and women have started voicing and sharing their experiences and concerns particularly on social media platforms.

It’s high time we discard the cloak of shame and normalcy to talk more about it, advocate for counselling, medical and family support so that women are not dismissed as being ‘hysterical’ any more. If only people understand what havoc hormones create!