Two US Returnees Narrate Their Covideital Journey To Bhubaneswar 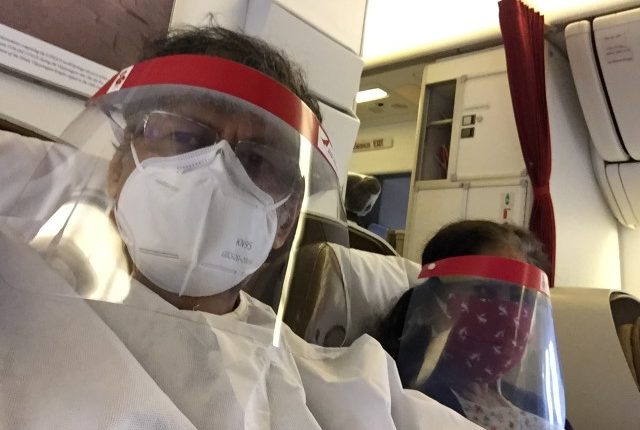 A measure of how the ongoing pandemic has upended the world is how the name – COVID  – has lent itself to a string of adjectival uses. The two coinages which I find most fetching for describing our recent experience of return from the US to our home town are ‘covideital’ and ‘covidential.’ While the latter can be easily seen as a dystopic spin on providential, the former needs some explaining.

‘Covideital’ is a word that conjures for me overtones of gloom and doom. In these surreal and bleak times that record horrendous numbers of deaths from across the world on a daily basis, fatalities that the mind cannot even fathom, ‘covideital’ looks well set to replace fatal. Hence my recourse to the two words, learned, I must say, courtesy Prof Ashok Mahapatra of Sambalpur University, to reflect on our – me and my wife’s – ‘covideital’ journey by air from the US to Bhubaneswar. The fact that I am alive to narrate does not take away the close, ‘covidential’ shave it was. I say ‘covidential’ in preference to providential because there is no closure that escape stories – think of the two famous escape movies The Great Escape and Escape to Victory – are normally predicated on. In journeying home we have not merely exchanged one Covid hotspot – US – for another that is fast emerging   – India. We are currently in self-isolation in our home in Chandrama Apartment for 14 days.

Here it is of course nothing like what it was in the US which, on the very day we flew from New York  –  July 17 – had shattered past records by reporting 77,000 new cases. On top of it, we had our own special problem. Under a non-immigrant tourist visa, we were faced with the expiry of our status with August 11, our stay deadline, inching closer.

Just days earlier there was a ruling by the US administration that overseas students have to leave the country if classes in fall were to be conducted online. The ruling was contested by top US universities. Harvard and MIT filed law suits against the US government. Coming under pressure, the US administration reversed the ruling. Stranded tourists like us, visiting their families, could not expect this to happen for us.  Our only hope was to be evacuated by the repatriation flights under the Vande Bharat Mission.  The inevitable outcome was that tickets were sold out within minutes of the web bookings being declared open.  Our small window came on July 17 in the fourth phase of the VBM which was set to expire on July 19. We grabbed two tickets. But, as it turned out, that was only the beginning of our ‘covideital’ journey.

To catch the flight from JFK we had to travel from RDU airport in North Carolina the day before and put up at a hotel in New York for the night. We made the bookings. Little did we know that a travel advisory by New York was in effect for travellers from the states in the west and the south – North Carolina is a southern state with over 1600 COVID-19 deaths and well over 90,000 infections – which were seeing a surge in COVID cases and deaths from mid-June. The advisory mandated that such travellers would have to fill out a health form online and ‘self-quarantine’ in New York for 14 days at their own expense.

Tantamount to a death sentence, isn’t it?

For imagine staring at this decree on the screen of your mobile or laptop two days prior to your flight. So what did we do? After see-sawing for a whole day between going and not going and cancelling our bookings – and losing all our money – we finally settled for travelling early next morning. The only straw for us to clutch was an escape clause in the travel guidance – Paul St-Pierre to be thanked for getting this confirmed by a phone call to the New York COVID hotline number -, specifying less than 24 hours of transit time in New York. So we flew the next day under the new normal, with face coverings, disinfecting wipes and hand sanitizers. 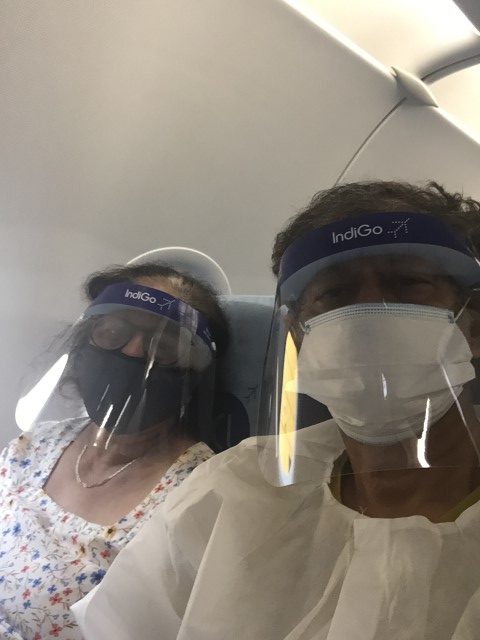 Upon landing at JFK, the New York City health officials checked our health forms and let us through, much to our disbelief. On our way to the hotel we were not subjected to further checks. As we checked in, it slowly sank in that we were on course for the Air India flight AI 102 the next day. A last US hurdle remained: a temperature check. That done, our ‘covidential’ ascent began, with the addition this time of face shields and protective suits. But we dreaded the descent in Delhi 14 hours later.

The flight time from Bhubaneswar to Delhi is two hours. We held tickets on an Indigo flight departing Delhi at 6.50 PM on July 18. Now although we had landed in Delhi at 11.40 AM, we made it to the plane at the very last minute, barely before the doors closed.

Delhi was chaos and disorder personified. Stampede, scramble and delay defined every stage of the process of completion of the COVID-19 formalities.  Social distancing went for a toss. There was no chance for a food or a bathroom break because that meant losing your spot in a queue that was only nominal. It was nightmarish, to say the least, and not just for us, but for scores of other passengers, with women with infants and children, people in wheel chairs and senior citizens like us bearing the brunt.

The scenes we had read about earlier of foreign returnees going through a harrowing ordeal upon arrival in Delhi were being re-enacted for us. Documentation was being asked for by the officials when all the passengers had been thermally screened. Why the hell could they not allow us to proceed to our home states where we would self-quarantine anyway? But no, they would insist on the certificates. An angelic intercession from a young woman personnel deployed at the COVID-19 triage centre, who believed the story of my wife being a survivor of lumbar spine surgery, and, who went an extra mile to persuade a health official to sign our medical form, saved the day for us.

The day’s log at the Biju Patnaik international airport recorded the touchdown of flight 6E 2014 on July 18 at 9 PM. For the two US returnees, aboard that flight, it was a ‘covidential’ escape from a ‘covideital’ nightmare. Needless to say, wishes from our daughter Anwesha, niece Lisa in the US, our family and our friends and well-wishers in Baripada and Bhubaneswar helped in the turning of the tide.

[The author is a former Professor and head of the department of English, Utkal University. He travelled to the US with his wife Swarnarenu Mohapatra in February 2020 and made it back on July 18 after two cancellations of their return flight.]