A View To A Fall 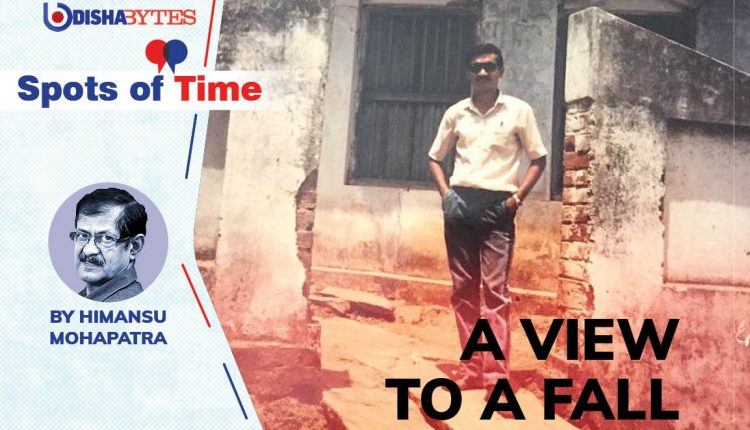 If only he had read the signs, if only he had made that telephone call that night, things might have turned out differently. But he had failed to read the signs. He little suspected, therefore, that in walking to the telephone booth on the morning after, he would be walking towards the worst horror of his life. In the few hours that it took for a chilly December night in Calcutta to turn into a crisp and frosty morning his world had been overturned.

Did he then have a premonition? Did future things cast their shadows beforehand? As he was travelling back home in the train , abruptly ending his engagement at Jadavpur University, he was thinking of how tantalizingly close he was brought that night to a vision of clairvoyance that could have made a difference. Telepathic contact had hovered around the edges of reason that night, but had failed to translate into a much-needed act of interception.

A further surprise was in store for him at home. It was a month after the incident. He was looking over the itemized billing from the telephone department. Among the list of long distance calls made from his Berhampur home in November-December of the preceding year was a number that, going by the STD code, belonged to someone in Baripada, but not to anyone he or his wife and daughter happened to recognize or remember. The call was shown as being logged on December 18, 1997, which was a day before the fateful occurrence.

“Why would we call an unfamiliar Baripada number?” asked Swarnima and Lorna in one voice.

The explanation rang true and the query sank to the bottom of the pond-like lead, but only to bob up to the surface like a cork a few days later.

“Look, if the computer has logged a call made from our number to that unknown number, it can’t be wrong. You know, the computer is the real lie detector of our time.”

“You mean as in a polygraph,” cut in Lorna.

“Yes,” he said and went on, “Maybe you wanted to call someone you knew, but your memory played a trick as you did the actual dialing and you ended up dialing a wrong number. It happens at times, you know. It is only the other day that I got a total stranger on the line when I was expecting the familiar voice of Suresh.”

He put the matter as elaborately as possible in the hope that it would jog their memory in which a secret lay locked up. It did after a little while. Lorna called out aloud from her bed which doubled up as her study in that house quite cramped for space.

“Yes, we did. I remember now. We had this sudden desire to speak with someone in your Baripada home. Ma gave me the number to dial, but we found that we had called a wrong number. The right number just didn’t occur to us that night.”

The narrative of the death of his mother in his infancy and of his being brought up by his grandmother had reached Lorna ever since she was at an age to understand things. She was 13 now and was studying in class eight of St. Vincent’s Convent School. She knew very well that his uncle was in loco parentis to her father.

“Yes, yes. I remember it now. It was pretty much the way Lorna described it.” Nima’s voice rang out from the kitchen.

So it was a sign after all. Did it too signify the same urgent bid for contact? Something was then happening in the deeper recesses of a few people, separated in space and time, in the days or even hours prior to the event of 19th of December, something that was drawing them towards each other unconsciously, inexorably. Outwardly they were going their separate and separated ways, but inwardly thoughts and feelings were seeking to converge around a single point, which was the wish to warn someone dear of an impending danger.

The drowning man, they say, goes over his entire life in a flash. The same must be true of the mental state of the person marked out for doom. Feelers are sent out from somewhere deep inside of him into the space where they spread in ever widening circles until they touch the remotest corner of the world. Anyone sharing a good vibe with the person can catch these vibrations. And so it happened with him on the night of December 19, 1997, in Calcutta as he was returning to the guesthouse of Jadavpur University in a taxi after listening to the Netaji Subhas memorial lecture by Edward Said at the ancestral Calcutta home of the great leader.

The lecture was the trigger. It had put him in mind about his uncle in Baripada. He had stayed put when everyone else of his generation had been on the move, searching for greener pastures.   The trappings of success had eluded him. The transition to the pucca house that every bleeder dreams had been a long time coming, and when it did come, it came as a spectre to haunt. The whole of Baripada had slapped on him the label of a failed man for his desire to remain rooted and for his decision to speak out against injustice. In the light of what this New York Professor was saying this negative gesture of his uncle, saying ‘no’ to unfairness and loving his place, now seemed the most elemental and purifying of moves. If anything, this gesture seemed to him to have the greater value for being articulated in a ‘fasting’ Baripada rather than in a ‘feasting’ New York. For someone from that stripped down and bare locale to have made it into the India Today magazine, as his uncle had done, was indeed something. That story of resistance against a monumental act of land-grabbing, known to the locals as the Hamilton Firm story, was his uncle’s crowning glory, something his whole life was a preparation for. He remembered the report in India Today by Farzand Ahmed. This was also cultural capital for Baripada which benefitted as much from his healing homeopathic doses as from his sound legal advice. He wanted to speak with his uncle that instant.

He paid off the taxi at the entrance to the humanities block at gate 4 and headed in the direction of the telephone booth standing close by. The small, dingy room lighted with a solitary light bulb was crowded with the late night callers, most of whom were students of the university wanting to take advantage of the drop in the long distance charges after 10 pm. The chill of the winter night was deepening. The warm and cosy bed in the guest house room appeared to brook no further delay. He would have to wait for another half hour to take his turn by the handset. It was not worth waiting that long. Besides, his uncle, a confirmed nocturnal, wouldn’t be home even at that late hour. He knew where he would be then.

Before his mind rose a vision of the Baripada Club which, in its secluded location, had proved to be such a sanctuary for its members. He wished he had the number of the club in his little phone book. Usually punctilious in respect of keeping all relevant facts and figures, he found that he had not been careful enough on this occasion. And at this realization the last bastion of his fast weakening flesh caved in, as it happens with the starving when the screen separating them from an array of mouth-watering dishes on the table is suddenly removed. His resolve to return to the booth before 8 next morning was more of a compromise. With this compromise made with his conscience there was nothing to stop him from making a hasty retreat with the sole aim of tucking himself into his warm bed. He had the incredible sensation, as his eyes were closing, of being sucked through a dark, cold and cavernous shaft and falling and falling and falling….

On waking up next morning the first thing he did was to look at his wrist watch. It showed 7.30. He sprang from his bed and made a dash for the telephone booth. He too wanted not to miss out on the reduced rates prevalent until eight. He made the call at 7.53, just in the nick of time. His uncle’s daughter came on line. This was only to be expected, because his uncle was not an early morning person. But he was clearly unprepared for what she said.

“Baba left home last night in a huff after a spat with Ma over the lifting of the pump from the well. This was within minutes of his coming back home from the club. He has not returned and has not been reported seen anywhere. Every possible place has been checked.”

“But surely he couldn’t have disappeared. What about his scooter?”

“He was dropped by his friends last night.  He left his scooter at the club where it still remains.”

He couldn’t think of anything, and telling her that he would call again later, he hung up. He did call a couple of hours later, but not anyone in Baripada. He called Nima in Berhampur.

“Is anything the matter? Heard any news from Baripada?”

His worst fears had been confirmed. It was as if he knew what was coming and he feared it because that knowledge slid into him like a knife.

“He fell into the well while removing the pump late at night.”

He couldn’t believe his ears. Was this possible? Could such a thing really happen without someone noticing it and doing something to prevent it?

But what he had heard from his wife had the force of a fait accompli, a tone of finality. As the news of the extraordinary fall was sinking in, he found himself split in half, with the body rooted to the spot where he was and the mind flying to that familiar parade field locality of Baripada, the scene of his life’s initial unfolding. The place looked deserted, its dreariness accentuated by the gloom of a late December night. The road to the ill-fated house was dotted with khai, coins and flowers, telltale signs of the final passage out of the bonds of the earth. He stood in the familiar lane and looked to his left at the newly-built but still unfinished pucca house and to his right at the tin-roofed house where the incident had occurred with the well in front peering out of the darkness like an evil eye. The pucca house, waiting for its cope stone, was standing forlorn. It would have been the house without a well and without the fear of fall had it been lived in. That, like the phone calls from Calcutta and Berhampur to Baripada, was not to be either. So it ended for his uncle the way it had begun: searching for the well of life undefiled. And thereby hung a tale which, alas, was twisted into the news of the mysterious disappearance and sensational surfacing in the next morning’s newspapers.

(Sushil Chandra Dash, ex-Chairman of Baripada Municipality and ex-G.P. and ex-P.P. of Mayurbhanj, died under mysterious circumstances on the night of December 19, 1997. His body was fished out from the well in front of his rented house in Parade Padia on December 20 morning by the fire brigade staff and some locals. A shadow hangs over the mysterious death of the eminent lawyer and homeopath….)