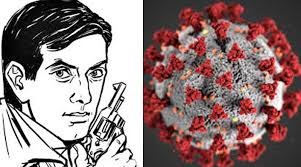 New Delhi: An indigenous paper-strip COVID-19 diagnostic test, named after one of India’s most famous fictitious detectives ‘FELUDA’, recently received approval from the Drugs Controller General of India for a commercial rollout.

This test kit is developed by scientists at the Delhi-based Institute of Genomics and Integrative Biology, one of the CSIR institutes, would be manufactured by Tata group company in accordance with an agreement that Tata Sons signed with the CSIR institute in May.

“It received regulatory approvals today from the Drug Controller General of India (DCGI) for commercial launch, as per ICMR guidelines, meeting high-quality benchmarks with 96 per cent sensitivity and 98 per cent specificity for detecting the novel coronavirus,” said a PIB press release.

The Tata CRISPR test is the world’s first diagnostic test to deploy a specially-adapted Cas9 protein to successfully detect the virus causing COVID-19, the statement added.

Here are the interesting facts about the testing kit FELUDA:

COVID-19: Vaccination Of 18+ People In Odisha From This Date