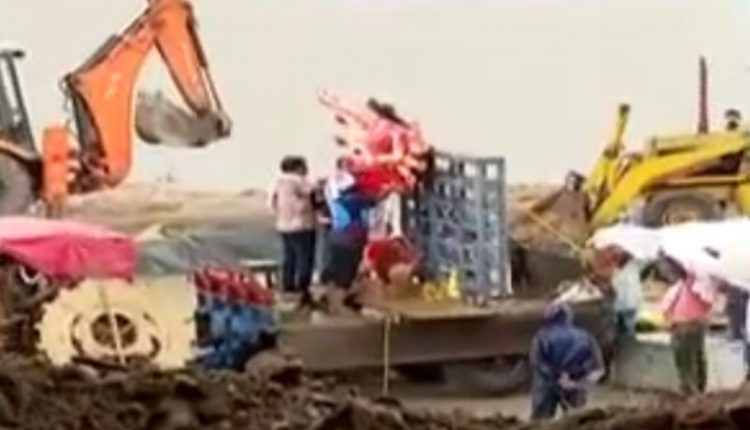 Cuttack: After Dussehra celebration came to an end with burning of Ravana effigy on Wednesday night, the process of bidding adieu to Maa Durga started in Odisha’s Cuttack city on Thursday morning.

The commercial hub of the state, which is famous for its magnificent Durga Puja, is also known for the grand ‘Bhasani’ immersion procession of Devi. The puja committees completed the final preparation and started the elaborate procedure for the immersion on the day.

Keeping the participation of large number of people in the immersion procession that is carried out on a long stretch through lane and sub-lanes, the district and police administration has made adequate arrangements for its smooth conduct.

As per the schedule decided by the administration earlier, the procession would start in the morning and continue till night. As per the provision, the tableaus of all puja committees congregated at Gourishankar Park in the city and started the procession one by one from there.

The organisers of puja pandals, devotees and locals accompanied the tableaus amid playing of music and bursting firecrackers during the procession. The celebration would continue throughout the day as the people of entire city participate in the final journey of the Goddess.

For the immersion, the administration has dug up 4 temporary ponds at Devigada on the banks of river Kathjodi. By noon, 4 idols had already been immersed in these ponds. More than 160 idols would be immersed on the day.

The immersion itself is an elaborate process as all idols of the tableau are immersed one by one after taking out their costumes and accessories. The idols are also broken up and then dumped into the water bodies.

In order to ensure smooth and uninterrupted immersion procession and maintain law and order, the administration has deployed 55 platoons of police force. They have been directed to not only accompany the procession but also keep strict watch at sensitive places around the city.