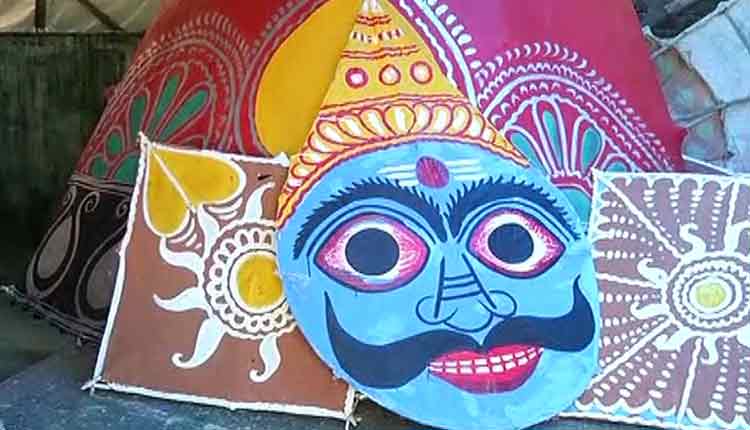 The bright fortnight (shukla paksha) of Chaitra is when devotees across India celebrate the Ram Navami with a lot of devotion and fervour. The Ramlila is one of the most common folk traditions across India. Odisha too has a great tradition of Ramlila.
A celebration that stands out for both its style and gaiety on one hand and uniqueness on the other, is the Sahijata in Puri. It depicts the Ramayana in its own way, with a lot of importance given to the character of Ravana.

Interestingly, Lord Jagannath, who is considered above these mundane classifications of good and evil, actually gives his Agyanmala (garland) to Ravana. In fact, the dance of Ravana – heroic and graceful at the same time, is one of the most popular items in the entire celebration. During Sahijata, the dance of Ravana, right in front of the Lord’s Lion Gate of the temple as well as in the narrow lanes or ‘sahis’, is one of the most noticeable scenes in Puri at that time. The mask of Ravana, called ‘Ravana Tati’, is worshipped in Puri.

This prominence to Ravana probably comes from a realisation that the distinction between good and evil is not always real, something that Indian philosophy strives to emphasise and writers like Herman Hesse have projected as the most important thought to emanate from India. But nowhere is this philosophy so vividly lived by ordinary people.

However, Ravana as a central character in the Puri Sahijata is not the only example of a negative character taking centerstage in an Odisha folk celebration.

The centrality of a traditional negative character in the now world-famous Dhanujatra of Bargarh, where the entire city turns into a stage for days together, is even more marked. The evil king Kansa of Mathura, the maternal uncle of Lord Krishna, who was killed by the latter, becomes the central character and ruler of the area in the Dhanujatra period. Interestingly, unlike other folk arts, here the line between drama and reality blurs as Maharaja Kansa, as he is reverently addressed, actually passes orders about civic amenities and other issues faced by common citizens and even the district administrators and city’s civic authorities honour those orders. They are even fined by king Kansa, for the lapses.

Be under no wrong impression. None of these depictions change the original story or try to build an alternate narrative. They do not try to make the anti-hero the hero. They just highlight his not-so-evil part a little more to make the stories a bit more human—as none of us are wholly saints or wholly sinners, wholly good or wholly evil.
This kind of thinking requires a tolerant collective character and an ability to see things beyond black and while, which has been the ethos of Odia culture, as evident from the pluralism of the Jagannath Cult. This evolved thinking is manifest not only in bringing out the human in the anti-hero but can be seen in how the negative aspects of the hero is acknowledged. Even Lord Jagannath, the supreme deity of all Odias and synonymous with the Odia identity, is not spared.

In the Laxmi Purana, the Lord, also called Purushottama or the Supreme Being too, has to go through all the ordeals because He chooses to side with something that is not right. The text describes, in great detail, the travails of the Lord and His elder brother, Lord Balabhadra, when they support ‘untouchability’ and only get out of the situation after they realise their mistake and repent. Interestingly, the text is written not by any iconoclast rebel poet, but by one of the greatest devotees of Lord Jagannath, Balarama Das, tales of whose devotion are legendary in Odisha.

Unfortunately, this great tradition of rising above the black and white is getting increasingly diluted. People are buying into this notion of fixed rights and wrongs without applying their own consciences. There is a clear decay visible in the liberal ethos, so typical of Odisha and Odias. But that is another story, probably, for another day.