Fragments Of A Diary: A Valuable Early Odia Travel Narrative

Fragments Of A Diary: A Trip To Sri Lanka By Jalandhar Dev Translated by Aditya Nayak Published by Centre For Asian Studies & Rupantar, Bhubaneswar 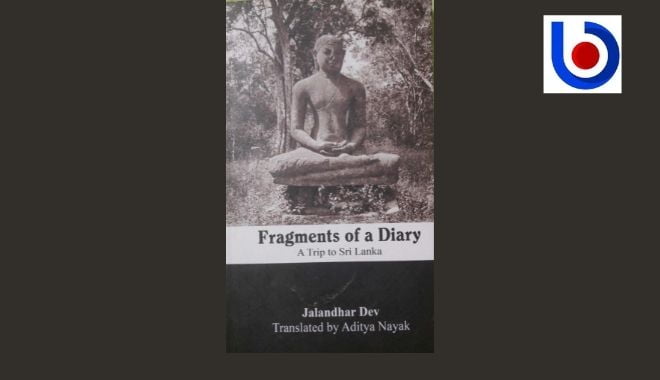 Bamanda State’s contribution to Odia literary culture in the late 19th and early 20th century was immense. The ruling family was enlightened and progressive. The two members of the ruling family who were culturally active were Jalandhar Dev and Sachidananda Dev. Both were involved with the new technology of the printing press. They were also invested in laying the foundations of the new scientific discourse at the turn of the 19th century in Odisha. Jalandhar Dev, a widely travelled person, was also instrumental in shaping the early Odia travel narrative. In his Sri Lanka diary his scientific curiosity can be seen to have informed his touristic presentations about the life and culture of the foreign land. His Sri Lanka diary is now available for a wider readership thanks to an English translation done by Aditya Nayak.

As expected, the pages of the diary are replete with vivid descriptions of places, people and things experienced by Jalandhar Dev during the course of his travels to southern India and Sri Lanka. What makes the observations unique is that they are presented with a dash of humour, wit and irony. These qualities are well conveyed in the translation.

For instance, when Dev describes the Theosophical society, this is what he writes: “The Theosophical Society is a strange organization. As soon as someone becomes its member, he/she starts seeing countless ghosts.” The writer has the ability to shock us because of his downright practical approach. In describing the beautiful swan-like flamingoes, he states: “If I had a gun I could have shot one of these and found a lot of facts about them by examining it.” Here the scientist in Dev gets the better of the tourist. Similarly, as he delights the readers with the “many-hued” crabs with violet spots, he shocks them by talking about their taste: “…I was deeply disappointed when I found that the dish was unfit to eat.”

Apart from the revealing accounts of the flora, fauna, temples, people and their clothing, what makes these fragments of the diary interesting are the little surprises and twists that you do not see coming. For example, when Dev is waiting at the station, he takes note of the unusual physical features of women. Here is an excerpt from the translated text which will help the reader savour these aberrations:

“We had to wait for a long time at the station. The passengers waiting included several European men and women. I found an attractive moustache on the upper lip of a beautiful young European girl. She must have been eighteen or nineteen years of age. It appeared that the girl had nothing against her moustache for she had not shaved it off. Did this not appear abnormal? One could not say how long this moustache would become when she grew older. Her moustache was as long as the one found on the face of a young man her age. Everything about Sri Lanka was strange and unusual. Mr. Haeckle claimed that he had seen a man having a woman’s breasts and this man suckled babies, too. If one considers these soberly they should not appear abnormal in any way. Every woman has a moustache. The moustache of a man may be long and black and that of a woman is not distinctly visible and can be seen only through a magnifying glass.”

Fragments of a Diary is a good addition to the growing body of Odia travel narrative in English translation. It helps to fuel curiosity about India’s southeastern neighbour which has been less mapped and more mythicised by Indian, especially Odia, writers. Jalandhar Dev, the shrewd observer of life around him, has made the place real and concrete through his descriptions. This trend came in handy to a later writer — Ganeswar Mishra — when he wrote his travel account of Sri Lanka in his book An Indian in Sri Lanka in the 1990s. For Mishra could go on to build on the perceptional base of Dev a very fine symbolic synthesis of two cultures.

The translator has done a fine job in selecting a work of such clear archival value and for having rendered it with sensitivity and clarity.