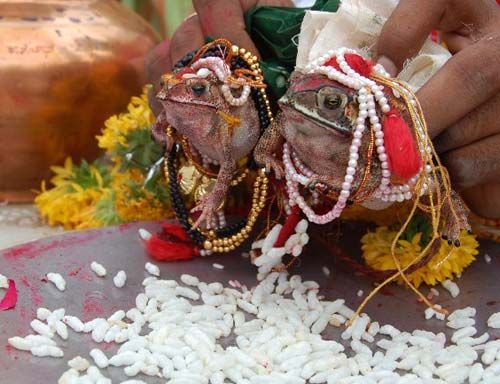 The conjugal rights of two frogs were forcefully disrupted by locals to stop incessant rain in Bhopal, Madhya Pradesh (MP).

Ironically, the now divorced couple were married off in a grand ceremony in the MP capital to invoke Lord Indra, the rain god, on July 19.

At that time, Bhopal was struck by drought. The frogs were wedded with the belief that it would bring rains in the region. However, in view of the heavy rains lashing the state at present, the couple’s marriage was sacrificed to bring relief.

As of Wednesday, MP had received 26 per cent more rainfall than normal and floods threat loomed in most parts of the state.

On Sunday, Bhopal had registered 48 mm of rain, almost breaking a 13-year-old record.