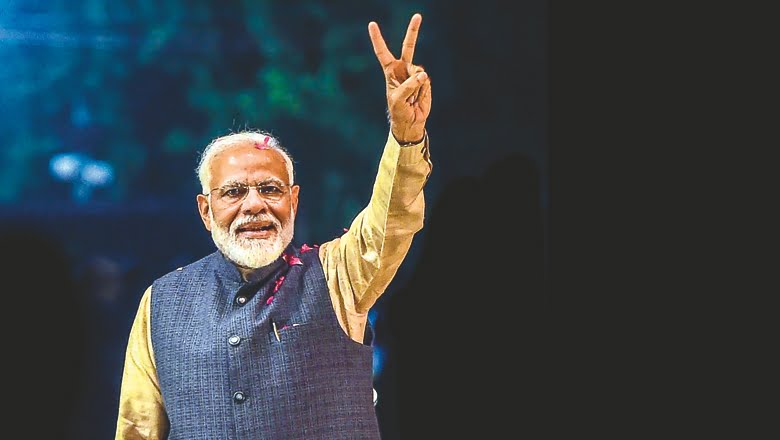 Prime Minister Modi ran a presidential style election and won it. Perhaps any other style would not have brought such a massive success for the BJP. The choice at the end of it all in front of the electorate was reduced to just one, ‘for or against Modi.’ The nation gave a massive thumbs up to Modi.

During the past five years, Modi has been able to assiduously create a much larger than life persona for himself, which straddles like a giant over the BJP and the national psyche. The towering Modi image made all other leaders appear puny in front of him, despite many opposing that this was the view only of Modi sycophants.

Modi’s larger than life, decisive, unbeatable, strong and powerful personality was marketed to the electorate with full power and precision by master strategist party president Amit Shah, with a string of electoral victories under his arm.

Modi single-handedly crisscrossed the country with unflagging energy and enthusiasm addressing more than 100 rallies. He repeatedly referred to his deeds many a times in the third person in almost all his rallies.

His narrative of national security and pride seems to have resonated more with the common masses of India who seem to have, for the time being, forgotten all their bread and butter issues.

The messaging that ‘You are safe in Modi’s hands, your security is a priority for Modi, Modi has and will deliver, Modi is not corrupt and Modi will throw all the crooks behind bar, Modi will make India a super power’ is something which was accepted whole-heartedly by the masses.

The confidence people had reposed in Modi in 2014 was further bolstered in the next five years because even though there were problems like the agrarian distress, rise in unemployment, economic sluggishness, changes had actually taken place at the grass root level, in terms of creation of roads, toilets, availability of  electricity and water besides opening of bank accounts.

Very few present-day leaders have the kind of charisma and the connect with people like Modi has, as was seen with massive number of people flocking his roadshows and rallies during the election campaign.

The Opposition was in a complete disarray and was not even able to cobble together a semblance of the Mahagathbandhan to take on the might of the well-oiled NDA electoral machinery. The fact that members of political parties who wanted to put up a joint fight against the NDA were completely divided on who would be their prime ministerial candidate definitely played on the mind of the voters.

Congress had the magnanimity to say that it would not be vying for the top slot, but then there were many other claimants like Mayawati, Mamata Banerji and Chandrababu Naidu among others.

Actually, the choice given to the voters was very clear. On the one hand there was an efficient cadre-based party with a strong leader at the helm with a specific ideology and goals against a rag-tag group of parties coming together just before elections trying to unsuccessfully hammer out a tie-up with no basic ideological similarities with leaders heading the parties nursing individual ambitions to be the prime minister. The choice was obvious.

Congress president Rahul Gandhi’s continual harping on the Rafael issue and shouting “Chowkidar chor hai” with impunity against the incumbent Prime Minister, seems to have not been taken kindly by the voters. Firstly, Congress did not have sufficient proof in hand and secondly, it was a complicated case for the electorate understand.

Modi did not even have to defend these accusations. He just pointed out to the scam ridden past of the UPA rule to demonstrate that Congress could not take a high moral ground on the question of corruption.

The inability of Congress to stitch alliances with other parties and go alone in many states seems to have harmed the cause of the Opposition as well as the Congress party itself. The grand old party seems to have been reduced to just three states – Tamil Nadu, Kerala and Punjab.

The negative campaign against Modi did not work for the Opposition, rather it may have helped Modi as he turned every such attack on himself into a mantra for success. The classic example being ‘Chowkidar chor hai’ jibe to “Mein bhi chowkidar’ slogan and large scale bill boards on the same.

Clearly, the massive victory shows that BJP with Modi as its leader has once again succeeded by not only being able to coalesce the pro-Hindutva votes in its favour but garner votes from all other communities too.

The Balakot episode made national security a significant narrative, which Modi played to his advantage, firstly to portray his strong and decisive action “ghar mein ghus ke maara” and secondly to portray his opponents and detractors as weak-kneed and unpatriotic.

The Opposition clearly could not gauge the impact Balakot had on the electorate. The more it tried to downplay and come out with a counter narrative, the more it went against them. Clearly, the common masses, proud of their forces going inside Pakistani territory to strike the terrorists, were not interested in any nit-picking or arguments made against the heroic action.

The Opposition was not seen by the people of India to be standing in support of the nation (Modi government) in its hour of glory when it struck Pakistan. It has had to pay the price. Quibbling over the fact that the defence forces are part of the nation and not of any incumbent government does not help.

In hindsight, the much-maligned demonetisation was perhaps seen by the electorate more as a strong and necessary action to weed out black money from the rich and corrupt, which only Modi could do with his strong-arm tactics.

The most important takeaway from this historic win with saffron power surging throughout the country India is that a majority of Indian people have favoured the rightist Hindu party as being the one which would look after their best interest.

Secularism is not much of an issue today. Even Modi has said since 2014, that political parties are not talking much about it and today, “no party can mislead the voters by donning the mask of secularism.”

Anubhav Wins Mother Of All Battles