Jagannath Is Much More Than A Deity; He Is A Feeling, An Emotion & A Way Of Life 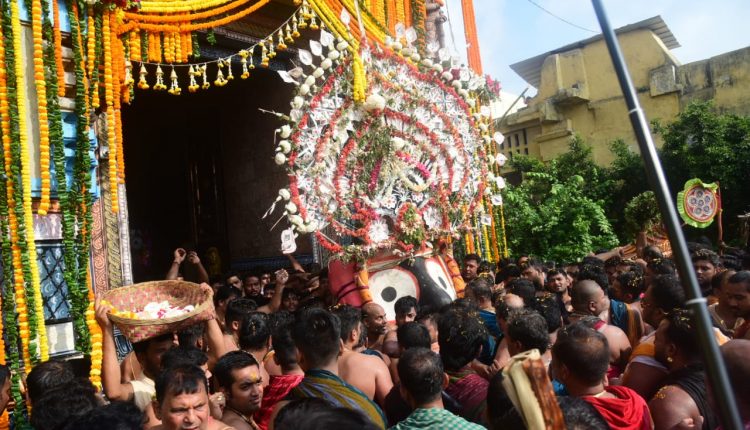 ‘Jay Jagannath’, ‘Jaga Kalia Mangala karantu’ (may the Lord grant you well-being) are common utterings in the life of an Odia. Odias take the utmost pride in their Lord Jagannath, who resides at Puri’s Shrikhsetra, in Odisha.

Revered as one of the ‘Char Dham’ (four Hindu pilgrimage places to be visited to attain moksha), the road that leads to the temple is known as ‘Bada Danda’ and the temple is referred to as ‘Bada Deula’. For the people of Odisha, ‘Jagannath’ is ‘Jagata ra natha’, meaning the Lord of this Universe. He is not only their God but also one amongst them, living a life like theirs.

He is omnipotent, sacred and at the same time made of sweat and blood. He is a friend and a guide, and hence lovingly addressed by different pet names as ‘Madhabha’, ‘Jaga’ or ‘Kalia’ ( meaning black, denoting his colour).

My earliest memory of God was drawing two big black dots, circled by a white outer ring — those were the eyes of the Lord, I was told.  They embodied the faith of my parents, loved ones and everybody around me.

‘Jagannatha’ was an integral part of our lives. My grandfather Late Surendra Mohanty, a scholar on the Jagannath Cult, had a very significant role in influencing ‘Kalia’ to be my favourite go-to God. My childhood was interspersed with stories of ‘Kalia’, my favourite being the one about ‘Snanapurnima’.  How the Lord would fall sick after bathing a bit too much with 108 pots of water, to beat the summer heat.

On falling sick, he along with his brother and sister does not go back to the temple to their ‘Ratna Simhasana’ (bejewelled throne), but to  ‘Ansara Gruha’. In colloquial language, ‘Ansara’ implies absara — taking a break from all activities, and ‘Gruha’ means house. The deities are sick and indisposed and hence need rest. So they are kept in complete isolation, away from the devotees.

During this time, the brahmin priests of the temple are forbidden from worshipping the Lord and he is under the care of ‘Daitapatis’ inside the ‘Gruha’, where he is being treated. The rituals around this are kept a closely-guarded secret.

During this fortnight, the traditional cooking of the ‘Mahaprasad’ is discontinued in the main temple, and he is mainly served fruits and berries. In household ‘temples’, the deities would be covered with a piece of cloth to give them rest.

As a child, I would be fascinated by this scene at every home,  and would keep questioning when will ‘Kalia’ and his siblings get better? The answer would be on Rath Yatra day, and I would wait for that day with a deep sense of hope and anticipation.

Rath Yatra symbolized to us a sense of victory over sickness, unhappiness and all things evil. Under the wheels of its chariot, every evil would be crushed to dust. The Trinity comes out from their temple to be accessible to devotees from all over the world, and it is this spirit that encompasses millions of Odias.

There are many legends about this ‘Chariot festival’. How the Lord’s chariot didn’t move at all despite all efforts since he was waiting for his beloved Muslim devotee  ‘Salabega’ to reach Puri; how the way the chariots reached Gundicha Temple was directly proportional to the hardships befalling the state.

When I was a child, I was told the chariot moves with great difficulty if the Lord is unhappy, and therefore we should always pray for Rath Yatra to be conducted smoothly, our destiny is dependent on it. It was only during the Mughal invasion that Rath Yatra had been discontinued — certainly the darkest period in Odisha’s history.

This year, amidst the COVID-19 pandemic situation, when there was a debate on whether to allow the ‘car festival’ and the commotion around it, I could feel the anxiety in my mother’s voice every time I called her. It resonated with the emotion of every Odia, questioning their faith and belief.

Rath Yatra is an integral part of the Jagannatha culture and cannot be separated from it as a standalone event. The revised Supreme Court order that came through in favour of Rath Yatra was a relief.

For the first time, though, Rath Yatra is being conducted without the devotees, the ropes of the colourful chariots being pulled by 1500 priests who had tested negative for COVID-19. The devotees stayed away, their devotion unwavering. Under the beating of drums and cymbals, and chanting of the Lord’s praise, the wheels of the chariots rolled effortlessly, carrying our beloved deities to  Gundicha temple.

Millions of devotees stayed glued to their TV screens, paying their obeisance. As the event progressed smoothly, it was proof that the war cry of ‘Jai Jagannath’ of his devotees against this pandemic has reached His ears, and that He, the Lord, derives His strength from his devotees as much as they do from Him. Because to them, Jagannath is much more than a deity, he is a ‘feeling’, an emotion — a bond that connects and binds us all.

It is the way of living our lives.

As my mother would say, ‘Kalia hathare dori’, meaning HE holds and controls the strings of this universe — our ‘Juggernaut!’ As long as we are, He will be.

Journalist & Writer Based In Dubai