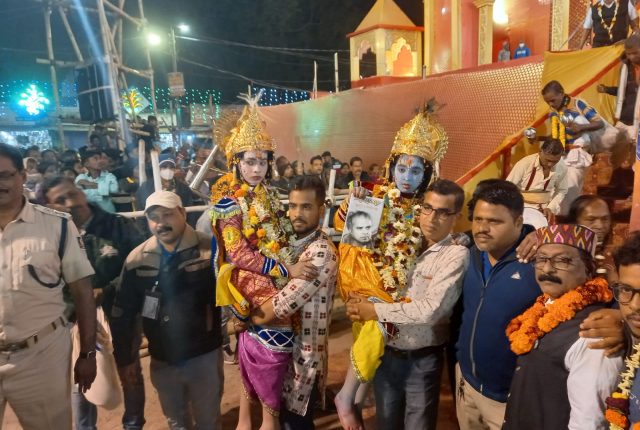 Puri: A day after the world-famous 75th Dhanu Yatra came to an end with the killing of demon king Kansa by Lord Krishna and Balaram in Odisha’s Bargarh, the king reached Puri to seek forgiveness from Lord Jagnnath on Saturday.

Hrusikesh Bhoi, who played the mythological character Kansa this year, arrived at ‘Shankaracharya Pitha’ and said “I punish all those people playing the characters of priests who believe in God. But in reality, I am a devotee of Lord Jagannath. I come here every year after the Bargarh Dhanu Yatra concludes.”

He takes a holy dip in Puri and visits Jagannath temple as a part of his process to seek forgiveness from the Lord.

This is the 10th time that this native of Chicholi village under Ambabhona Block in Bargarh district put on the grease paint for the ‘Maharaja’s’ role.

During the festival, the entire Bargarh town was transformed into a very big stage for 11 days. While Bargarh became Mathura, the Jeera river of Bargarh turns to be the Yamuna while Amapali, which is located across the river, transforms into Gopapura.

The rule of Kansa, his death, and the exploits of Lord Krishna are enacted in 14 main places in Mathura and Gopapura.

A Raj Darbar (royal court), 42 feet tall, 120 ft long, and 35 feet wide, for King Kansa, as well as a Rangamahal was constructed where the actors entertained spectators with their performances.

“This festival came into existence in 1947-48 to celebrate the Indian Independence. While the rule of Kansa symbolises the oppressive rule of the British, the coronation of Ugrasen marks the beginning of democracy,” Rabi Narayan Panda on behalf of the Bargarh Dhanu Jatra organisers told media.

Well-known writer Mayadhar Nayak was felicitated on the last day of the festival. A book written Nayak ‘Yuddhabhumi’ was also given to Balaram.

It is pertinent to mention here that the 12-year-old child artiste, Shreyas Pujhari, who was selected to play the role of Balaram, passed away on December 11. He was a native of Amapali of Bargarh town.

The 11-day long the largest open-air theatre in the world began on December 27. The theme of the drama has been borrowed from the mythology of ‘Krishna Leela’ and ‘Mathura Vijay’.