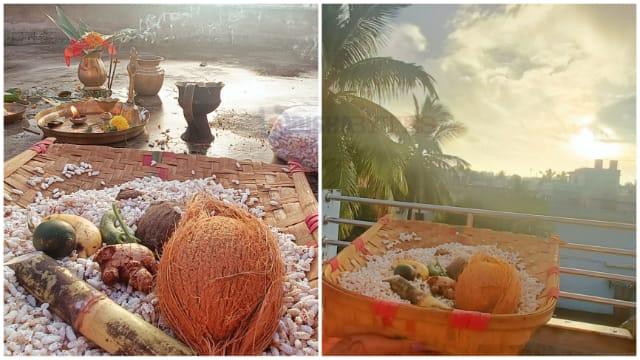 The festivity, the fervour and the fun do not end with ‘Bhasani’ of Maa Durga. We are only half-way through. It is not without reason that they say Odias celebrate 13 festivals in 12 months (baramasare teera parba).

And in Odisha, girls truly have all the fun. After pandal hopping, it is again time for community bonding with Kumar Purnima, which is the second of the two festivals in the state that celebrates womanhood. The other is the three-day Raja Parba.

But today it’s Kumar Purnima, the autumn festival when girls pray for a perfect life partner like Kumar or Kartikeya, the most handsome among the Gods and it’s his birthday. But, peculiarly enough, there is no ritual for Lord Kartikeya, instead, the Sun and the Moon are worshipped.

The rituals begin very early in the morning when girls don new attires and offer ‘anjuli’ (a palmful) to the rising Sun near Brundabati (Tulsi or Basil plant) seven times with ‘lia’ (a kind of grain) from the ‘kula’ (winnowing fan) and seven other items, including coconut, banana, apple, cucumber, betel nut, janhi (striped gourd), sugarcane and flowers.

After daylong fasting, ‘Chanda Chakata’ (in the shape of the crescent moon) prepared from banana, ‘chhena’ (cottage cheese), ‘lia’ and sugar is offered again near Brundabati, aptly decorated with colourful flowers and ‘diya’ and ‘dhupa’ (incense stick), bringing an end to the rituals amid the sound of ‘huluhuli’ (ululation) and sankha (conch).

And girls make sure that they see the ‘Uila Janha’ (the fresh moon that has just risen on the horizon) while partaking the prasad as it is believed that any delay would mean that they would end up with an old and senile groom instead of a young and handsome one. Scary!!!!

This festival has inspired a number of folklore and popular songs including “kuanra punei janha lo…phula baula beni…” ‘Puchi khela’ is a  signature of the Kumara Purnima game played in a squatting position while moving the balance of the body from one leg to another rapidly.  In villages, ‘Puchi’ competitions are held in the moonlight.

Goddess Laxmi Too Was Born Today

Kumar Purnima marks the beginning of the 11 days of Gajalaxmi Puja across the state. It is celebrated in Ganjam and Dhenkanal districts amid much fanfare. Many people worship the Goddess at their homes and play Pasha (Chess) and other indoor games all through the night. The significance: It is believed that those who wish to acquire wealth should always be vigilant at night.

Beginning Of the Holy Month Of Kartika

Kumara Purnima marks the end of the month of Ashwini in Hindu calendar and the beginning of Kartika. During the entire month, people abstain from a non-vegetarian diet. Those who observe the special rituals associated with this month can only take a specific diet like ‘Habisa dalma’ prepared using moong daal, colocasia, green raw banana, ‘oou’ and ghee, without turmeric once every day before dusk.