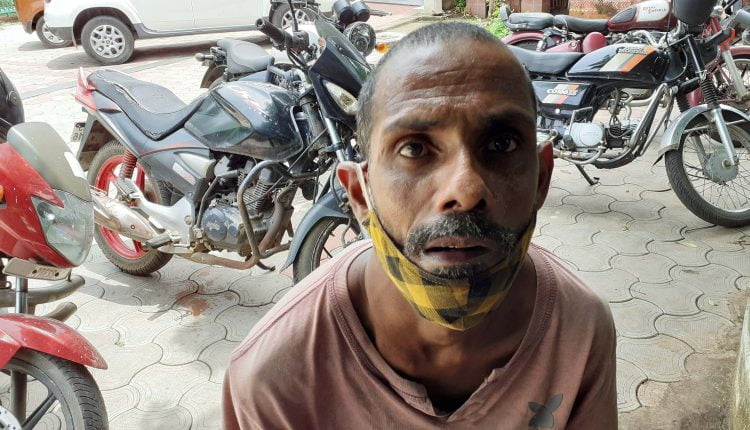 Uttam Nayak, a person with disabilities (PwDs), is from a village under Dhamnagar block in Odisha’s Bhadrak district. He has been living in Bhubaneswar for the last several years.

Uttam, who has limb and speech impairments, is clearly a man on the margins. Without regular employment, he lives for the day. He does odd jobs in a milk booth in Bhubaneswar where he gets around Rs 1,000 a month. When he has no work, he moves around the nearby areas and often seeks contribution from generous people to survive in the city. He is fortunate to get a space for himself at the milk booth to spend the night.

Uttam has left behind his wife and son back home. His wife also does wage jobs in their village to contribute to the family income. They get subsidised rice through the public distribution system. Besides, Uttam receives a pension of Rs 500 per month as a PwDs from the government. He goes every month from Bhubaneswar to Dhamnagar by train to collect the meagre amount from the gram panchayat.

Still, the total income from odd jobs, pension and contributions from generous people is not enough for the poor family to sustain. He says during COVID-19 pandemic his family’s situation has become worse.

Uttam has studied up to secondary level but his articulation is clear and straight to the point. He says the pension amount of Rs 500 the PwDs get is pittance and the Odisha government should increase it to Rs 3,000 per month. He argues that states like Delhi, Andhra Pradesh and Kerala provide much more as pension to PwDs than the Odisha government.

So Uttam definitely has a point. But the reality is, he is as invisible and voiceless as countless others like him. The government and society in general often gloss over their feeble grievances. Many people, including government officials, even think that spending on pensions or other benefits like subsidised rice are a waste of taxpayers’ money. They conveniently overlook the fact that the incentives to corporate groups far exceed the amount meant for social welfare.

Let us, as sensible human beings, think what is the worth of Rs 500. When many of us visit a standard city restaurant, we pay an equivalent amount for a meal. And we expect a poor person having no source of livelihood to sustain himself for a month with the same amount!

This problem is not confined to PwDs alone. It also encompasses widows and old people who receive similar pension amounts.

Uttam set a base amount of Rs 3,000 as monthly pension because a poor man like him could not think beyond that and thought it could be a comfortable amount to live with. Maybe, he thought about that amount because of the parameter set by Andhra Pradesh. It is an amount most poor people will think about because it is quite a jump from Rs 500 or Rs 700 (pension for those above 70 years).

However, the subject of pension deserves radical thinking. The debate should be on how to cover all senior citizens of the country, besides PwDs and widows – the poor people who get a pittance, the top government officers who probably get the highest amounts of pension and those self-employed people who never get any but also get old – under a uniform pension scheme.

Is it possible that a uniform pension amount is fixed for all senior citizens irrespective of their ranks, status and class so as to help them lead a decent life? Or is it too utopian or unrealistic to implement?

Omicron Scare: Samples Of 246 COVID-Positive Returnees To Odisha Under Genome…