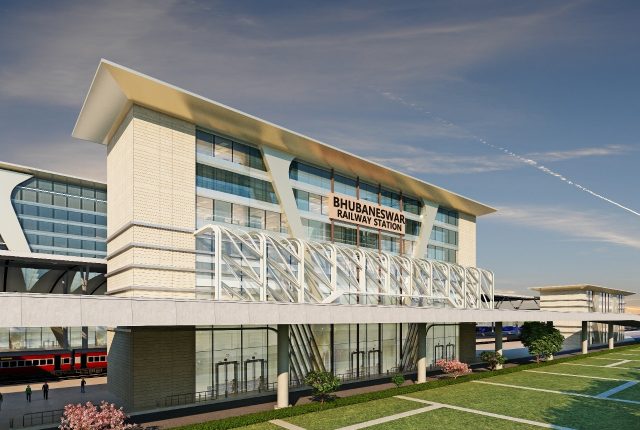 Revitalisation of train station in today’s world is a response to urbanisation with a hope that infrastructure will encourage locals to commute using bicycle and public transport instead of cars. Consequently, congestion will be eased, making it a more sustainable city. The opportunity for Bhubaneswar arrived at an appropriate time to revitalise itself.

Let’s take the example of Utrecht, a town in Netherlands that went for redevelopment of its central railway station in 2019. The focus was around integrated, comfortable bicycle parking to answer a major problem and create a mobility hub that favours cyclists and pedestrians, and makes car use less attractive.

Utrecht Central Station was once built for approximately 35 million passengers per year. Currently, 88 million people use the station annually. This number is constantly increasing and is expected to reach 100 million passengers in 2030. The new public transport terminal houses train, bus and tram platforms under one undulating roof, including the world’s largest bicycle parking.

Over the next two decades, the number of travellers to Bhubaneswar station will grow to over a million per year. Since the existing building couldn’t handle the increasing number of passengers and their aspirations, Bhubaneswar railway station needed to be rebuilt.

The modern railway station must be two to three times of its present size, developed as an integrated station complex that will regulate the transport of train, bicycle, taxi, bus and, in future, metro rail or tram, etc.

The station must be an autonomous building with a focus to create two new city squares at both entrances. In case of Utrecht, they have a convention centre on one side, while the largest bicycle parking facility was built at the other side.

In today’s swanky public spaces, there will be station promenade, a public street, plazas etc. However, the biggest challenge of Bhubaneswar and most cities in India will be with increase in traffic, railway station becoming an isolated fort that divides cities into parts. That results in a split in culture, family bondages, communication, etc.

What we used to cover by walking or cycling in our childhood by crossing the railway tracks is now a war zone with boarders. Which the walking and cycling culture became automobile culture, resulting in congestion, pollution and obstruction in city development.

In Bhubaneswar, while one part enjoys smart amenities the other part faces all the urban disruptions.

It’s not where Bhubaneswar railway station redevelopment plan got the inspiration. There are many examples, but let’s consider Utrecht, where most cross the railroad tracks. A passerby is able to move from west to east without having to use a ‘chip card’. Restaurants, shops and a possible market gives this promenade the atmosphere of a real city street. Through large glass walls, serving as curtains hanging from the roof of 235 by 85 metres, the station offers all kinds of stunning lookouts, to trains, tracks and perhaps expansive views of the city.

The interior has a reserved allure and modest charm. It’s the people, signage, vehicles and other typical additions that make the station alive and vibrant. Colour and ambience are what Bhubaneswar needs.

Making Bhubaneswar railway station a lookalike of the airport is not bad. But that will not ensure people getting train tickets one hour prior to boarding and not even the time trains run between Bhubaneswar and New Delhi.

In the cites that inspired Bhubaneswar railway station, trains are competing with airlines, but not in case of the Odisha capital. Once when I was travelling from Frankfurt to Stuttgart, the option was to wait for five hours for a flight and then another couple of hours in between city and airport.

So I walked downstairs into the railway terminal and purchased train ticket to Stuttgart. Interestingly, I had options to buy two-way tickets with discount, to buy tickets with little more pieces to travel with green energy. Since it was a weekend, I got discounted tickets with confirmed seats and boarding time in 15 minutes and two hours of journey time, 10 minutes’ walk into hotel at Stuttgart.

Similarly, during my visits across the globe in cities like Rotterdam, Seoul, New York, Tokyo etc, I never came across a train station dividing the city because of its existence. Rather, it acted as a nerve centre.

As Bhubaneswar railway station gets a facelift after almost 75 years, India’s first planned capital city must overcome the impression of a station standing as an isolated fort or airport, and rather be a lively city centre.

In a way, Bhubaneswar must open up multiple communication channels between eastern and western parts of the city without disruption in cycling, walking and culture.