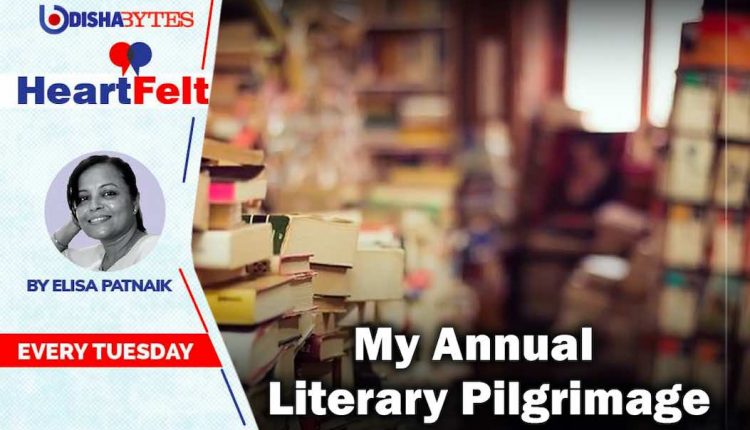 I am just back from my annual pilgrimage to the Jaipur Literature Festival (JLF), soaked with a delectable and eclectic mix of literature, art and music. I am charged with the enlightenment gained from a plethora of ideas, views and knowledge exchanged. I am deeply inspired by the flow of creativity, sharing and articulation of thoughts, impressions and motifs by an array of authors, artists, and musicians from across India and abroad. And profoundly impressed by the humility of some of the greatest writers and artists.

Come January every year, I am filled with excitement for my annual sojourn to the JLF which I have been attending for the last 6 years. Not only because I get to meet, listen to and absorb the thoughts of some of the greatest minds but also to be part of an event that celebrates the exchange of diverse ideas and freedom of expression and promotes inclusivity and cross-culturalism.

After all, where else would one find Nobel prize winners, Booker and Pulitzer prize writers and Sahitya Academy awardees discussing their writing, craft and stories, talking to their readers, mingling with the crowd, having tea from the nearby festival stall and not minding sitting down on the grass to watch a session of another writer or performer? Only at the JLF. Add to it the absolutely glorious January weather, the colour, noise, flavour and art of Jaipur in Rajasthan and you have the perfect environ to recharge your mind, heart and soul. For it is one of those few places where conversations flow unbridled, where the space between writers, poets, artists, and their audience fades and where people are connected by an intimate festival bond.

I love the morning exhilaration of those five days, at the anticipation of all those sessions waiting to unfold, of reaching the colourful and creative venue pulsating with low chatter and thrill. Every morning starts with an invigorating classical musical performance by highly talented young artists. Absorbing the soulful music under the dappled canopy of the tent along with a cup of masala chai sets the perfect tone for the day. And then begins the tough task of choosing the sessions from among the five that occur simultaneously at any given time. Unable to contain the greed of tasting a bit of the delectable array of speakers and topics, I have scrambled from one venue to the other – Front Lawn, Mughal Tent, Durbar Hall, Charbagh and Baithak – the venues which now sound as familiar and loving as old friends.

At the end of each day, I am swathed by a strange yet sweet concoction of fulfilment, exhaustion from having listened to and witnessed some of the best minds, picking up some coveted books from the festival bookstore and having met and interacted with some interesting people at the Festival.

The Jaipur Lit Fest is indeed the holy grail of all lit fests, bringing together an array of writers, connoisseurs, influencers, thinkers, activists, politicians, business leaders, sportspeople, artists, and performers along with an equally riveting audience, thrumming with discussions, debates, musical performances and an enthralling festival environment.

It’s a place that reverberates with the best of ideas, music and events which allow everyone to enjoy a truly immersive experience of the five-day-long festival. The 16th edition of the JLF held recently for example, offered a representation of several Indian national languages and multiple foreign languages besides English and Hindi with sessions spread across the five venues with over 250 speakers.

Often described as the ‘greatest literary show on Earth,’ I admire the JLF for championing freedom of expression and serving as a democratic platform offering access to all. From school and college students, professionals and senior citizens to intellectuals and readers, the festival offers a sumptuous feast of moments and ideas for all. For nearly 14 years, the Festival was freely accessible for all and it’s only recently that it charges a nominal fee.

The range of topics discussed, and debated upon is indeed mind-boggling. From climate justice, gender, identity, tech morality, global crisis in agriculture, to current affairs, politics, geo-politics, social justice, Partition, Colonialism, science, art, food and photography – you name it, and JLF would have it. Writers and books span diverse genres – crime, noir, memoir, translations, poetry, biographies and the literary fete celebrates the best in fiction, non-fiction and language. Besides writers and artists, it’s stimulating to hear journalists, political commentators, diplomats and analysts as well.

One of the best parts of the Festival is its celebration and promotion of ‘the other voices’ in literature, art, and the opportunity it provides for Subalterns to express and shine. The fest continues to engage in thoughtful debates and dialogues providing a platform for representatives of disenfranchised communities to voice their experiences and share their stories. Every year, beautiful tribal artworks are displayed in the festival venue, emerging talents from the world of indigenous and modern art are endorsed and books by Dalit, tribal, women and regional writers are promoted. What’s also unique about the JLF is its propagation of the culture of freedom of expression and It is the only global festival which is absolutely free.

In the words of the co-founder, author and historian William Dalrymple, “JLF is a free-flowing gathering of great literary minds that is like a global super university opening its gates for anyone who wants to attend for five whole days.”

The Jaipur Lit Fest is also known for its superb organisation with its affable, hospitable and extremely helpful team of volunteers who do their jobs with utmost dedication and perfection. The excellently curated literature, music and art sessions, the food stalls with steaming cups of kulhad chai and aromatic coffee, and the festival bazaar all lend to the vivacious, warm and festive atmosphere.

Though the festival venue has now changed from the beautiful environs of the Diggi Place to a swankier star hotel, thankfully the essence remains the same. I miss the effervescence of Diggi Palace though where it was easier to mingle with the authors and artists. Although the swarming crowds especially during weekends (fuelled by the democratic nature of the festival) is tiring to be with, it’s heartening to note it’s popularity, especially among the younger generation. Of course, the selfie crowd is a trifle annoying but honestly, when my heart and mind are contented listening to some of the finest of minds, I don’t really mind the selfie seekers.

The JLF is an event that remains close and dear to my heart. Where else in the world could I listen to Abdulrazak Gurnah recalling the restorative power of writing followed by Usha Uthup crooning her favourite songs? Or be a part of a debate on “The right to dissent” and listen to poetry by Gulzar? Listen to the scars of 1947 and hear writer-director Onir talking about being gay? Learn about the nuances of language in ‘Ek Hindi, Anek Hindi,” and then listen to some extremely endearing moments from flute maestro Pandit Hari Prasad Chaurasia? Only at the JLF.