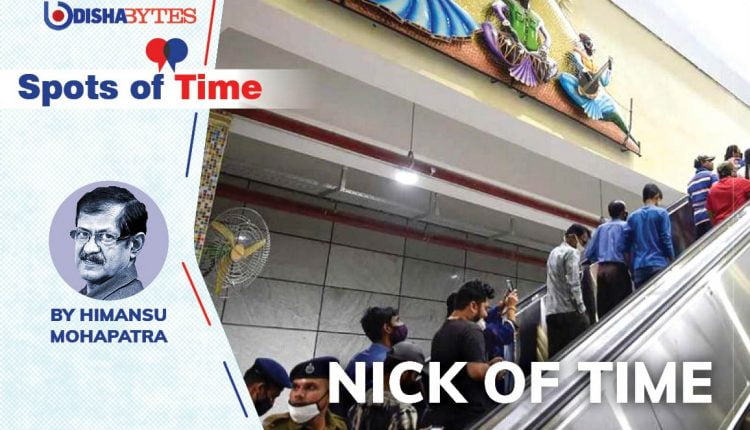 “Blame it on the pale blue aerogramme,” Subrat said as he readied to board the Aeroflot flight to London at Calcutta. He was not alone. With him were his wife and 3-year old daughter. The day was July 24, 1986.

Heart aflutter, he stepped on to the moving staircase first and was borne upward. He was entirely oblivious that his wife needed help with the new thing called escalator, especially when she was stepping on it for the first time. Suddenly a scream from behind made him look back in panic. His wife, with Lorna in her arm, was falling over backwards. She was trying to keep herself precariously balanced on the escalator step by flailing her right arm frantically. In a moment the tipping point would be reached and both of them would fall. Thank God, no. A supporting hand shot out from the back. It was that of a young man, a foreigner, who came for the escalator in the nick of time.

When he looked back, the entire past month, starting with his precipitate arrival in India, was like this: a time of close shaves and hair raising escapes as well as of unexpected hits and almost no misses.

When he landed at Calcutta airport a month and half ago, there was not much to feel optimistic about. In fact, reinforcing his pessimism was a dreary and drastically altered Calcutta that he saw through the open window of the rusty yellow ambassador car on his way to the bus station at Esplanade.

Mounds of earth scooped up from every available open space adjacent to roads lay heaped up like hillocks. Huge cables and an enormous quantity of twisted metals and wires jutted out from the giant holes here and there like ribs from a smashed ribcage. Water gushed from burst pipes at many places.

“Why all this digging and churning of Calcutta?” he asked the cabbie.

So Calcutta was going to be the first Indian city to have an underground railway network.

Before Subrat’s eyes flashed a scene from a Dickens novel he recently read in his course at UEA. It was the railway cutting in London in 1839. A great earthquake …, the scene began. The words were stirring, stamped with the anarchic power of Dickens’s imagination. Subrat was seeing the London of that time in the disorderly, topsy-turvy Calcutta of the present. The past always returns and nothing ever dies thanks to the law of uneven development, he thought. But it was small comfort at that point. For his mind was already racing to the dreaded return to this ravaged cityscape a week or two later. He foresaw the hectic running around in the baking summer heat for the UK visa for his family.

Yet a month later here they were. What appeared insurmountable was behind them. They had come through.

Things had unfolded at a feverish pace within a month. Grant of leave from college for his wife, UK visa for mother and daughter, booking of air ticket on Aeroflot through a broker sitting in a dingy, dimly-lit room in a nondescript street in Calcutta – each one of the tasks packed enough stalling power.

But how did it all happen? A month before he saw himself as stuck in England until the end of his studies with nothing but air mail letters as the connecting link between Berhampur and England. Ironically, it was one such letter that set the ball rolling. It came from his father in Baripada in April. He had written to inform Subrat of the marriage of his daughter next month. Like all fathers, he had expectations from his son. Only the expectations were much higher in Subrat’s case. His was supposedly a case of pauper-turned-prince by his setting foot in Vilat. So off he had to go to clear the confusion.

The aerogramme got Subrat going as nothing else would or could at that point. That meant the Strathclyde Conference on “The Linguistics of Writing” for which his School had nominated him had to be sacrificed. So be it. There came a time in a person’s life when he saw with clarity what his priorities were. Right now a trip to India at his own expense with all the hardship it implied was far more important than an all-expense paid trip to Glasgow.

The family boarded amid a mixture of apprehension and excitement. The plane was poised for takeoff. He reached sideways from his aisle seat to help his wife and daughter fasten their seat belts.

“But you can’t blame it on the aerogramme, as you said.”

“Of course not, it’s just that the opposite of ‘praise it on’ doesn’t work in English. The truth is, a weightless aerogramme can pack a punch more powerful than a locomotive. Just as the flapping of a butterfly’s wings can bring on a desert storm.” Subrat said, as the plane began taxing on the runway.

It is only retrospectively that Subrat saw this aerogramme -propelled air journey – and the heat and dust and grind of the past one month and the way they survived it – as an example of ‘universal mercy’.

For he was yet to hear Nirad C. Choudhury spell out his famous underdog survival philosophy in a TV interview that he would watch in their 13 Suffolk Walk home in 1987.

Also Read: A Great Bio-Critique Of A Great Writer