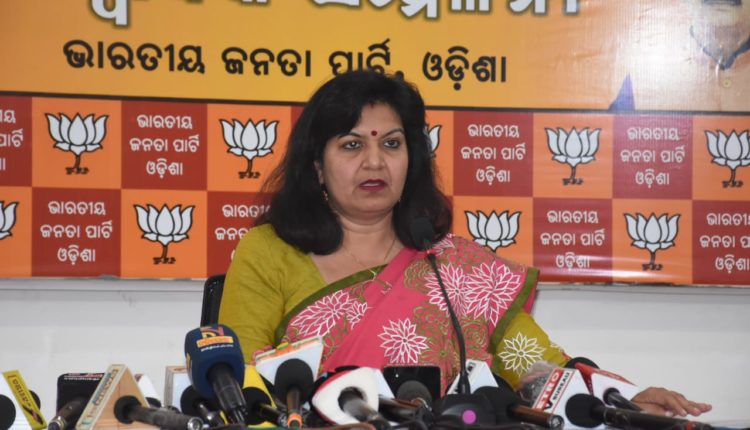 Bhubaneswar: After reaching the Odisha capital, Bhubaneswar MP Aparajita Sarangi on Monday said that the uproar over National Monument Authority’s (NMA) heritage bylaws for Jagannath Temple in Puri and two temples of Ekamra Khetra was uncalled for since these are still at the draft stage.

“The draft by-laws for five monuments have been posted on the website to invite objections/suggestions. If there is any objection, the state government should file objections. What is the meaning of withdrawal of draft bylaws? Even if the draft bylaws are withdrawn, the provisions under AMSAR Act of 1958, as amended in 2010, continue to be in operation. In fact, the heritage bylaws are intended to help the general public by streamlining the norms for taking up reconstruction/renovation activities in the restricted areas,” she told at a press meet.

According to the Act of 1958 and amendment in 2010, every monument has 100 metres of prohibited area and 200 metres (beyond that) of the regulated area.

“The restriction relating to taking up any new construction within 100 metres of the prohibited area is applicable to an ASI notified monument and will apply to Puri Temple, Lingaraj Temple, Brahmeshwar Temple, Anant Basudev temple or any other such notified monuments. There are instances where certain categories of public amenities have been allowed keeping in view the public requirement, contextual need and keeping the heritage character of the place intact,” Aparajita added.

“The careless demolition of the Sanskrit College near Suka-Sari temple and the subsequent discovery of heritage structures underneath is a typical example of how central agencies have not been involved in demolition, planning and implementation of an important project,” she said.

The MP further alleged that the Odisha government had refused to share any architectural plan or detailed project report with the NMA or with ASI despite requests from the authorities.

“It is also worthwhile to mention that Culture Director is the competent authority for formulating the bylaws for respective temples and sending it to NMA headquarters for publication. Hence, the contention that state agencies were not involved is ridiculous, to say the least,” she said.

Aparajita further clarified on sevayats or general public being adversely impacted by the bylaws as has been the contention of the state government.

“The houses belonging to sevayats, the general public, mutts have been acquired, compensation paid and have been razed to the ground within 75 metres from the perimeter of Lingaraj temple and Puri temple. Thus, these stakeholders will not be adversely impacted by the restriction relating to the prohibited zone. So far as people beyond 100 metres and within 300 metres of the notified monuments are concerned, these by-laws would have actually helped them by laying down the norms and guidelines relating to building renovation, reconstruction,” she added.

Aparajita said that many state governments have ensured that the Planning Authority’s building approval portal is linked with NMA’s online approval portal as part of Ease of Doing Business. “Unfortunately, Odisha has not taken any initiative to integrate with NMA portal while ruling party leaders continue to shed crocodile tears,” she added.